We know how Greece flattened the curve, but it is worth exploring the 'why'

A combo picture shows tourists walking in front of the Greek Parliament building at Syntagma square in Athens, Greece, 27 July 2017 (left) and the same square empty on 30 March 2020 (right), (issued 16 April 2020). The coronavirus pandemic has radically changed the way everyone lives. Photo: AAP via EPA/PANTELIS SAITAS

Greeks, the rebels of the European Union during the debt crisis, turned into model citizens for once doing exactly as they are told, united in their battle against a global pandemic.

The same country which had its credibility crippled during the years of austerity has emerged as a global leader when it comes to flattening the curve and is a shining example for other nations.

Bridge Tank’s ground-breaking analysis of ten European countries, released this week, found that Greece was the best performing country in Europe when it came to flattening the curve. The think tank’s Chairman Joel Ruet stated: “In the sea of data about COVID-19, one indicator stands out: the doubling rate of deaths and confirmed cases. It allows to measure how well countries are flattening the curve. With the exception of Germany, we see a strong correlation between an early lockdown and subsequent success in controlling the spread of the virus.” 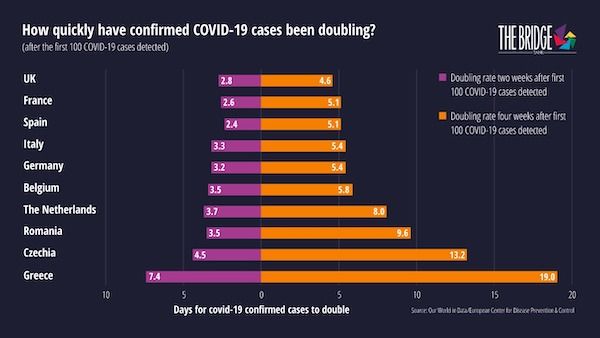 The reasons for Greece’s success are many:

(1) Learning from history: Ten years of austerity may have helped Greeks put aside their defiant attitude towards authority. Following the Greek economic meltdown, Greeks may have learnt their lesson. Alex Patelis, Prime Minister Kyriakos Mitsotakis economics adviser, told Al Jazeera that the Greek crisis played a role in their correct handling of the coronavirus crisis. “We want to show that Greece is a serious country. We want people to say that Greece handled this well,” Patelis said. “If we succeed, it will have a multiplier effect on our reputation. Greece emerged from a 10-year economic crisis with its credibility crippled, and we want to get past being labelled as the black sheep of Europe.” A major driving force behind Greece’s quick reaction to the pandemic was the fragility of the country’s healthcare system, already fraught with shortages and other failings linked to the shrinkage of the Greek economy by 26 per cent with hospitals bearing the brunt of cuts in return for rescue bailouts. Realising the gravity of the situation, the government was quick to react.

(2) The key players: The government has drawn global praise. Italian newspaper Corriere della Sera was one of many that praised the country’s leadership and Mr Mitsotakis “careful and humble” steps that resulted “this time, in Greece teaching lessons in northern Europe.” Apart from managing to stem the spread of the crisis, the government which won elections last year promising reforms, has managed to turn the crisis into a huge opportunity to simplify government processes and utilise technology for the greater good to facilitate the lockdown and ensure people remain in their homes. A large part of the credit should also go to the no-nonsense approach of Sydney-born Harvard educated immunologist Sotiris Tsiodras, voted the most popular man in Greece right now according to a poll by Marc for Alpha TV. Helped by shocking scenes from across the Adriatic to highlight the importance of staying at home, the bookish expert has managed to make people fully aware of the dangers posed by the disease. Joined by Deputy Civil Protection Minister Nikos Haliaras, voted the second-most popular Greek in the same poll, the two have managed to sway the country – including the mighty Greek Orthodox Church – to follow the path of reason.

(3) The quick reflexes: Greece speedily imposed its full lockdown on 23 March even prior to the first death noted in the country, and this has greatly helped the country’s success in keeping down the numbers and not seeing the same levels of coronavirus as Italy. For Stella Ladi, an assistant professor at Queen Mary University of London and Athens Panteion University, a reason for Greece’s swift response was the example of its neighbouring country. “It’s often seen not only as a neighbour but as a mirror country for Greece. Seeing the images from Italy and what was happening there pushed both the government and the people to take it seriously,” she told The Independent.

(4) Greek resilient nature: Many are surprised that the same people who swarmed Syndagma Square when restrictions were placed in nightclub opening times could be so disciplined and adaptable. This should not come as a surprise bearing in mind the resilient nature and heritage of the people. Greeks have survived wars, occupations, civil unrest, and starvation and have always come out strong. Financial CEO/photographer David Krasnostein told Neos Kosmos that the ‘lost decade’ filled with calamities for Greece was just proof of the country’s resilience. “The good news is, I think Greeks understand now that managing the economy properly really matters, and the government they’ve got now is completely different,” Mr Krasnostein said prior to the release of his book ‘A Resilient Spirit – Greek Life During the Lost Decade’.

(5) Love of Health: Health is important to Greeks, more so than money, and is the general benediction. The word “geia” (meaning ‘hi’ and ‘bye’) is a shortening of the word “health” (y-geia), and when Greeks raise their glasses they say “Eis ygeian” (to health). Since antiquity, the body beautiful, the healthy spirit and healthy mind and good old Spartan selection of the fittest have been in the Greek psyche.

Even Greeks are surprised at their success. Here’s a humorous look at Greek success in implementing coronavirus measures: