One of the things that best defines modern Australia is its embrace of multiculturalism. The new arrivals have had to face adjustments in a new country. Over the years each group has brought something new to the Australian table.

There is no purer Philhellene than the one who has decided to share their life with a Greek partner. We speak to a few of these Philhellenes and ask them about what it is like to be married to someone of Greek descent. 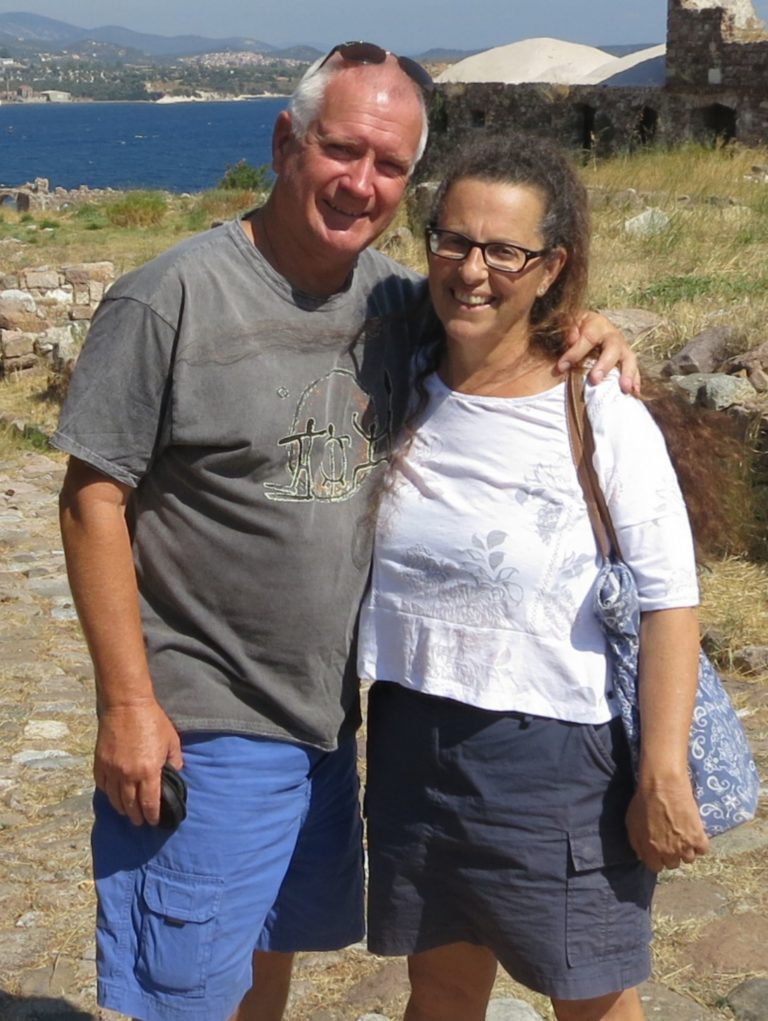 When Tony met Despina, at university, they were good friends. It took seven years before they realised they were more than just friends and finally tied the knot. No, this not a story inspired by When Harry Met Sally but it is the story of a Ballarat boy, Tony Whitefield, who met and eventually married a Greek girl, Despina Kassavetis. Both are academics with PhDs to their names

“I was bit slow, a country boy. We were doing the same degree at university, shared the same friends. We were very good friends through Teachers College and never even thought we would get together,” said Mr Whitefield.

Dr Whitefield, an academic and an author, did not have much to do with the Greek community of Ballarat. He was friendly with a Greek at school whose family had a fish and chips shop but that was it.

“It was a very different family environment. There was different food and languages,” said Dr Whitefield of the coming together of the two families when they married. His parents-in-law, who came from Lemnos in the 1950s, did not speak English well so that communications were a problem for a while.

He worked hard at learning the language and 10 years ago he decided to take formal lessons to improve his reading and writing in Greek and is still doing so now.

“It was a culture shock at first but my family accepted her with no big difficulties.

“My dad used to work on caravans so a lot of my childhood holidays were travelling around by caravan. Despina’s parents would get on the train and take day trips but they did not go on long holidays.

The couple in the marriage shared a close connection with their parents although the Greek end also included a more extended family of relations.

“My mother came from a large family and we did not really keep in touch with all the cousins,” said Dr Whitefield. “There are first cousins with whom I have not spoken in 40 years, whereas I know every one of Despina’s cousins.”

Dr Whitefield said keeping the Greek language alive was one of the results of his wife’s extended family links.

READ MORE: Ancient chapter is added to the Lemnos story in a novel by Aussie academic and writer

“My kids (Peter and Katerina, both in their early 30s) both speak fluent Greek and have been doing so since they started school. My parents-in-law would babysit and speak Greek to them, now my wife speaks Greek to the grandchildren.

“It is great to see my daughter, Katerina, pick up her yiayia, (who is 85 and largely independent), who likes to talk a lot, to go shopping. I think it is terrific.”

The Greek connection has also been maintained with annual visits to Lemnos. But Mr Whitefield’s connection to the island predates his marriage. His grandfather, Henry, served at Gallipoli spent time on the island.

These connections led to his co-writing with Roger Hawthorn A Lemnos Odyssey; From Jason and the Argonauts to the Anzacs at Gallipoli which was published in 2016. He recently published his first novel revolving the ancient Lemnian heroine Hypsipyle, The Queen of Limnos.

“When Despina is in Lemnos, she becomes very Greek, but she is also Australian and proud of both background. She is now also a yiayia and you don’t get in the way of a yiayia and her grandchildren.”

While the couple have both followed academic careers, and have shared a passion for taekwando with their family, writing is a calling that Dr Whitefield pursues on this own.

READ MORE: Love lockdown: the pandemic has put pressure on many relationships, but here’s how to tell if yours will survive Barrister Malcolm Gray, a sixth-generation Australian of Irish and English descent, first met Olyvia Nikou, first Greek-born Queen’s Counsel in Australia, while both were taking part a Bar Readers’ Course in Melbourne in 1983. The course was part of the two lawyers’ preparations to becoming barristers.

“We became friends then and kept in contact socially over the years,” said Mr Gray. They both had married and raised families. Mr Gray’s wife died in 2015.

His friendship with Olyvia developed so that by 2019 they travelled together to Iran, Greece and Italy.

“We had such a wonderful time together (on that journey) that we decided to get married on 29 February, this year. I certainly won’t forget our anniversary on 28 February and 1 March,” he said.

Ms Nikou was born in Sythendro village outside the mountain town of Grevena in Western Macedonia and came to Australia when she was just 18 months old. Mr Gray’s first visit to Greece took him to the south but COVID-19 put an end to plans to visit his wife’s birthplace this year.

“I had done a lot of work professionally for Greek clients over the years but did not know much about their culture,” he said.

His marriage to Ms Nikou has opened a new vista on the Greek side of Australian life.

“Olyvia is a very generous person, an intelligent thinker who is very passionate about Greek culture,” he said. Part of that commitment is reflected in her role as Co-chair on the advisory board of the Greek Centre for Contemporary Culture.

As a result Mr Gray has been exposed to a whole new facet of life.

“What I love is the sense of fun. The Greeks enjoy themselves and are very welcoming. I don’t speak Greek but her family and friends are accepting.

“I really enjoy the gatherings and christenings and so on. I am being exposed to another culture and new part of life,” said Mr Gray. 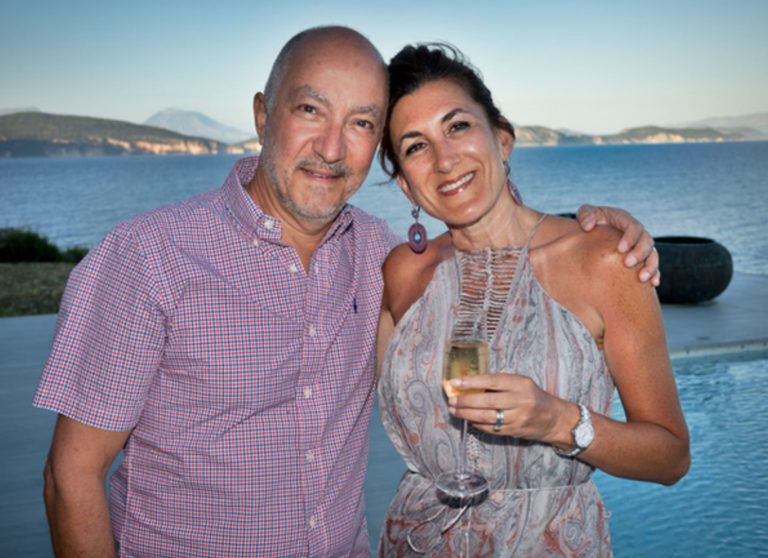 As with Tony Whitefield, David Krasnostein did not really know any Greeks when he was growing up in Perth, apart from a few Greek kids at high school. That changed in 2004 when bumped into Pat Stragalinos in an elevator in Melbourne.

“I took one look at her and said to myself: ‘she’s the one.’” And his life took on a new direction.

As with all the others interviewed for this article, Mr Krasnostein’s resume and that of his wife would easily fill the page. Suffice to say he is a successful lawyer who has worked in the United States and Australia and who serves on a number of boards. Ms Stragalinos who started life as chartered accountant has developed into a human resources specialist and Executive Coach. She volunteers her HR and coaching experience to a number of not for profit organisations in Melbourne.

Along with legal publications to his name, Mr Krasnostein also has written A Resilient Spirit – Greek Life During the Lost Decade a photographic essay of Greece in the decade after the Global Financial Crisis published by the Hellenic Museum of Victoria where he has served as a director.

READ MORE: A resilient spirit: David Krasnostein and the art of the perennial

“There are three things that represent ‘Greekness’: Very strong family ties and a very broad definition of how broad family is; No matter what the event food is always on offer and you eat well and often; and the cleanest family homes in the world – you walk into a Greek house and you need sunglasses it is so bright and clean.”

Mr Krasnostein’s grandparents left Russia in the 1890s to settle in Perth where the family has since remained.

“I am Jewish and Jews are exactly the same when it comes to strong family ties and a love of food – so no adjustment was needed there. My side is easiest though as the family is in Perth but there is loads of family. You learn to make time for the important stuff,” he said.

“Part of Greek culture which is shared by the Jewish experience and other immigrant groups is a great passion for protecting the underdog and social justice. It is a natural instinct that comes from small country with a tough history.”

“I had no expectations when I married. Getting to know the Greek side has always been an adventure.”

“As a tourist the people are nice but there is no real commitment. When they find that you actually live there, they treat you differently and a whole new set of relationships opens up.

“For a two or three months of the year when we go there we live parallel lives. I love that even with my bad Greek (he can read and write) and the effort of learning Greek opens up a new world in my life.

“I can walk into a kafeneio and understand the gist what the old men are saying and I can shop around,” he said.

The house in Greece is full of life where friends and family find hospitality and conversation – a reflection of a full life.