No need to be Greek to enjoy ‘The Taverna’, but if you are – even better

The Taverna will be releasing nationally on July 2nd with Palace, Classic, Lido, Cameo and Ritz cinemas. Photo: Supplied

Melburnians and Sydney-siders who attended last year’s closing night of the Greek Film Festival, were treated to a cinematic night at The Taverna: where food, love and cultural differences feature in a chaotic series of events and comedy crosses paths with drama – just like in real life.

Director Alkinos Tsilimidos recalls a somewhat rare experience, admitting that “any premiere” can be an “awkward situation” with insecurities surfacing about audience reception.

“On my way driving to the festival, I was thinking I haven’t tested this with any audience, if anything it’s going to be interesting.”

The result was better than what he could have imagined, with the team of creatives now ready for the next challenge, ahead of the movie’s upcoming national release.

“The Greek [Australian] audience embraced it completely, which was such a fantastic thing to see. The film didn’t belong to me anymore, it belonged to the people there,” the award-winning director tells Neos Kosmos.

READ MORE: Delphi Bank’s 26th Greek Film Festival is (almost) over, and Melbourne co-organiser remembers blasts from the past Set in a real family run Greek restaurant in Melbourne’s East, The Taverna brings together an action-packed evening where anything that can possibly go wrong does so.

The popular belly dancer of the business refuses to perform upon realising her ex-husband is dining in with his new partner and an eager waitress offers to replace the act at the eleventh hour, sparking a chain of hilarious mishaps.

A sleazy customer, a devious plan hatched by a well-meaning chef, a kidnapping incident and a scooter accident somehow all fit into the night as it evolves, with the tavern owner, Kostas, called to deal with multiple crisis.

His character, brought to life by acclaimed Greek actor Vangelis Mourikis, is a central one in the plot and set to awaken past experiences for many, as it did for cast member Emmanueal Costaras.

In her words, “There’s always a Kosta in a typical Greek tavern, a big personality that everybody knows who he is.

“It’s kind of in our culture, everyone is a family no matter who you are and that’s a really big theme that I think we brought up in the film. Everyone who comes in the restaurant to eat has some connection to him [the tavern owner] and if they don’t he will find some common ground, so the movie definitely brought up a lot of those memories for me,” she says pointing to a “sense of community and belonging”.

For Costaras, a versatile artist whose career encompasses singing, dancing and TV credits, The Taverna marks her silver screen debut, playing the role of Katerina, one of Kostas’ loyal waiting staff. Speaking to Neos Kosmos, she opens up on how the experience was an opportunity to reconnect to her heritage.

The second-generation Greek Australian – with parents hailing from the Greek-Egyptian community – remembers not speaking a word of English until the age of five. But while she grew up fully understanding reading and writing her maternal language, she would avoid speaking in Greek.

“Things sometimes seem to fall into your lap for a reason, and maybe this was to reintroduce me back to my culture a bit more.

“It was a really proud moment for me, because I reconnected with my Greek side a lot more, not that I ever lost connection but sort of found a different part of my self in joining this film and then watching myself I feel ‘my Greek is actually not that bad’,” she says with a laugh.

“Having the guidance from Alkinos [Tsilimidos] and working so closely with Vangelis [Mourikis] helped bring to light my character and made me more confident. It’s pretty amazing for an actor to come out on this debut and play a role so close to who I am, it’s quite beautiful.”

The Taverna’s national release, postponed from 30 April due to the pandemic-induced cinema closures, is scheduled for 2 July.

According to Mr Costaras, the timing could potentially prove ideal.

“One thing that has come out of the pandemic is that we really have to start utilising what we have here in Australia. That could be one of the reasons why some people will be like ‘It was made here in Melbourne, I want to support it.

“We have an incredible arts community here[…] and I think Taverna is sort of a testament to this.”

As the director explains, the ‘bet’ relies on one level that we’re “coming out of a time where people were sitting in their loungeroom watching online content”, with the second dynamic coming into play being the opening up to a broader audience. But their hopes for success stem from one the movie’s greatest strengths:

“People embracing something that is so local and so close to their community. The Taverna is not just about Greeks, we’re speaking to a very wide migrant population.”
The film represents in Mr Tsilimidos’ eye “the Australia that I recognise, growing up and seeing what was happening around my neighbourhood. The idea that it’s a multicultural hotpot.”

And this is reflected in the “diverse cast”, with the leading characters including representations of Greek, Turkish and Indian backgrounds. 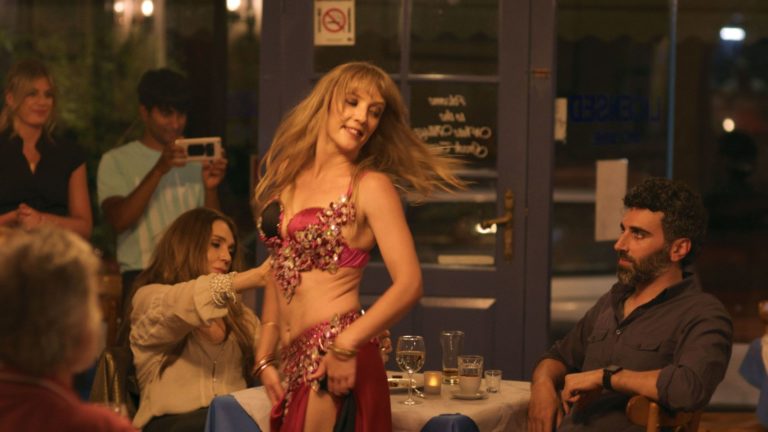 “But more importantly, they’re in a position of power, as opposed to being supports,” Mr Tsilimidos says hinting to the way the movie steps away from and Anglo-dominated big screen pattern.

However, the movie is not centred around the topic of migration. “The essential DNA of the film” as Mr Tsilimidos terms it, is the realisation that “to change your life, you need to undo some old habits.”

“In one night these characters, they’re confronted by something deeply personal, they’re challenged. And the question asked of them is ‘can you do it or not?’ and if you don’t you’re stuck in something that won’t change for you,” the filmmaker says before reminding it’s not unusual for human drama to have an entertaining side too, especially in a black comedy.

“That’s the sort of theme driving the underbelly of The Taverna, there’s all the other themes that run through it, but essentially that’s what I’m asking of the characters. And we wanted to have a laugh about that as well.”