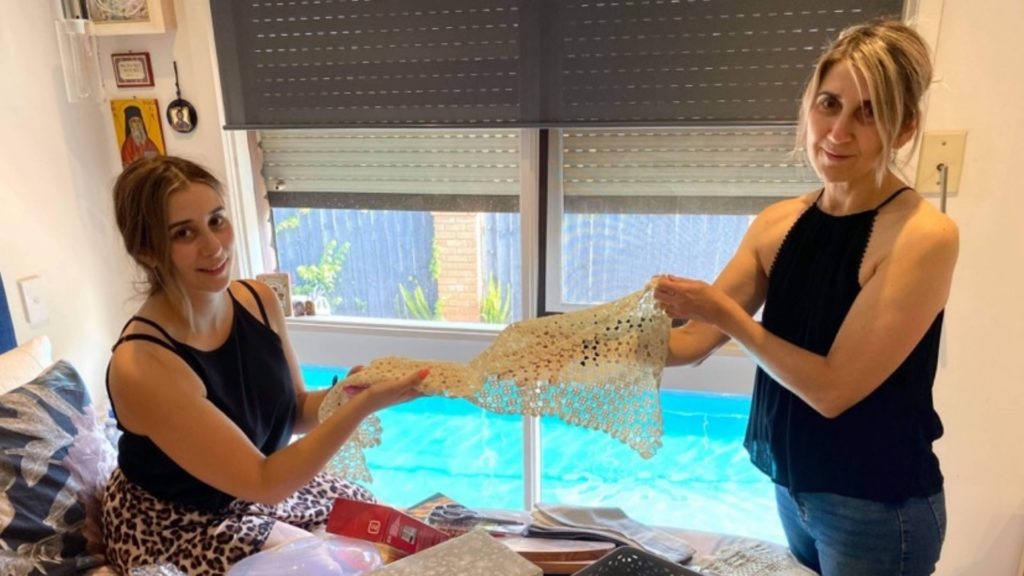 Christina Charitakis show off her crocheted doily and wares with her mother Photo: Supplied

Have you ever walked into a room in your family home and wondered what that ginormous chest covered in doilies was hiding?

In many traditional ethnic societies, it was understood that a dowry (or προίκα in Greek) often represented a bride’s worth and the family inheritance.

In a paper written by Maria Palakgtsoglou, Daniela Cosmini, Rose, Diana Glenn and Eric Bouvet which delves into the cultural and social changes in the dowry practices of Greek and Italian post-war migrants in South Australia it is stated that:

“Dowry and virtue were the most important ‘commodities’ sought by prospective grooms in the selection of a bride.”

The ‘glory box‘ itself dates back to ancient times, as accounts of handing over property and personal possessions by a bride’s family were said to form a groom’s household assets.

In later years the dowry given would become more specific depending on the region the bride hailed from explained the authors.

“In the island of Mykonos, for example, nearly all women received a small house as a dowry as well as land and a trousseau. In other regions, the dowry was property (land), olive trees, gold coins, jewellery and a trousseau whose items were handmade by the bride and her mother.”

As Greek migrants made their way over to Australia, their quilts, doilies and tablecloths came with them. The tradition of the dowry changed as they settled in to their new life in a foreign land and had children.

Mother of two Lucy Sismanis remembers how the merchant would drive around in the early to mid 70s, stopping at homes to sell his wares to families with future brides.

“I was born here, both my parents were from Corintho. I remember when my mother did my glory box, we used to have the embora (merchant) come around in a big van. My mum would say ‘come and take a look’ so we’d go in and pick out what I liked and then we’d take and then he’d come back every week and she would pay it off slowly,” she recalled.

“That’s the way that it was in those days.”

To this day, she still has her prized orange and white Invicta blankets “that were the style back then”, gifted by her mother.

Ms Sismanis carried on the tradition of the dowry when she had her own children and much like with her own mother, made sure the items were picked out collaboratively.

“I started when my daughter was around 20, carrying on the tradition from my mother. My daughter got married when she was 27, so when I started collecting when she was about 20 I would ask her what she liked and she would tell me her colour scheme and it progressed from there,” she said.

Ms Sismanis even went as far to switch up on the tradition and prepare homewares for her son too, as her and her husband have “always been equal with my children”.

“I thought this doesn’t sit right, I’m going to start one up for my son…There’s sheets, doona covers, pillows. I’ve bought some electrical for my son too, like a kettle and toaster and with him I’ve just bought it all in stainless steel because it never really dates and he loves it,” she explained.

She noted that in this day and age, the dowry is more about helping your children prepare for the next phase of their life, like moving out, rather than sending them off for marriage.

25-year-old hairdresser Christina Charitakis has also been preparing for when she eventually moves out of her family home.

Ms Charitakis, along with the help of her mother have been purchasing items for her own ‘dowry’ since buying an investment property a few years ago.

“We thought let’s get things for when I’m ready to move out, so now we’ve got about three boxes full,” she said.

In the boxes, which she confesses take up a lot of room in her family home, Ms Charitakis stores her collection of pots and pans, knives, knick-knacks and glassware.

Collecting items for her future home became a bonding activity, a part of her future she could share with her family in the present and something she hopes to do with her own family in due time.

“I think for us, it’s a thing that we can do together and she’s been through it herself. It’s nice because we can involve yiayia in it. We’ll go for a walk and mum will say ‘oh, maybe let’s get this plant to put in your front garden for when you move out’,” she said.

“It’s just lovely that I can do something so personal with her, and for her to have an input on what I’m doing in my next step in life. I think sometimes parents get a bit lost once you move out.”

Ms Charitakis also receives crocheted pieces from her grandmother who still lives in Cyprus and as much as they are appreciated, are not as in style as they used to be, which is always a challenge when collating dowry items.

“I know one day when she travels here and sees my house, I’m going to have to just stage the house with everything she’s sent me, just to make sure she thinks I like it”, she laughed.

It is for this reason that Ms Sismanis only buys neutral tones and stainless steel items for her son Keith’s dowry.

The dowry, despite moving on from its mostly gender based roots, still has a place in modern society.

Today people meld tradition with practicality, ensuring they are well equipped and not eating off of a leftover moving box with their hands after forgetting to buy some plates and cutlery when they or their children fly the nest.