A view of the Aegean by Dimitris Boulotis, the photographer of Lemnos

Readers will be aware of my travels throughout Greece over the years and the writings that have resulted from them. And of course one of my favourite destinations has been Lemnos. While this has been principally due to my interest to research and document the connection between this northern Aegean island, Australia and the Anzacs, I have also come to know and love the island.

I met Dimitris on my first visit to Lemnos. It was over ten years ago. I was part of a delegation visiting the island to plan for Lemnos potential involvement in the 2015 Centenary of Anzac. Dimitris was then the deputy mayor of the island. He is one of those people you sometimes meet, a bit quiet, reserved maybe, but always with something more to tell.

It began for me – as a historian – when I saw the old Ottoman-era stone sign of the Lemnos municipality that had been embedded and preserved in the wall of the town hall. He responded immediately to my inquiry, with stories of the long history of the island and its part in Greece’s wider story. From there our relationship would blossom. He would be my essential guide to the island, to its historic nooks and cranies, tidbits of information that led me further on my journey of discovery.

One of Dimitris’ passions is photography. From the first time I met him he enthused me with his interest in capturing the changing environment of the island. We would compare notes as I took many of my own photographs of some of Lemnos key sites connecting the island to the Anzacs.

I would often seek his advice as to the possibly location of particular photographs taken by the Anzacs in 1915, identifying key pieces of infrastructure erected by the Anzacs on Lemnos during the Gallipoli campaign. He never tired of my requests for him to visit particular locations, sending me his photographs to confirm or strike out a possible historic site suggested by the documentary evidence. Along with Liza Koutsaplis of Athens, Dimitris has been invaluable to my research.

It was in no small part due to my collaboration with Dimitris that I was able to identify the site of the Australian Pier (see Discovering Lemnos’ Australian Pier, NK, August 2017). Yes, my academic and documentary research had confirmed its construction in 1915. But it was through discussions with Dimitris that we were able to confirm its continuing existence north of Mudros. He also assisted me in the identification of the now famous beacon on Lemnos (see The Mysterious Beacon of Lemnos, NK, May 2020), clarifying its structure and confirming for me that it may well have been erected by Allied soldiers, possibly Australians, in 1915.

It was through this assistance that Dimitris has played a key role in the realization of Lemnos’ Anzac Trail, a continuing joint project of the Lemnos Gallipoli Commemorative Committee and the local authorities on Lemnos. Dimitris was also instrumental in organizing (with the participation of our Committee) the first Anzac conference on Lemnos in 2013 (see Commemorative Tourism Gets a Boost on Lemnos, NK, July 2013).

He has also been a well of information about some of the history of Lemnos, especially through his own family connection to the island. While I was researching my stories on Lemnos’ part in WW2, Dimitris was able to share with me some of his recollections from his father of the German occupation, the resistance on the Island and its liberation. Along with other firsthand accounts, this proved invaluable (see The Day the Germans Marched on Lemnos, NK, November 2017).

But Dimitris eye would always being me to the physical environment, taking me to the WW2 martyrs memorial on the outskirts of Myrina as well as identifying for me the location of the former German memorial on the island, destroyed by the inhabitants after the liberation.

But most importantly I have always been amazed by Dimitris photographic skill. Over the years he has regularly sent me some of the results of his efforts. While he has photographed many locations beyond his home Island, it is his ability to capture the changing scenes and various locations on Lemnos that are particularly captivating for me. Whether it is natural environment or man-made structures, Dimitris has a particular eye, turning what might appear to others as an ordinary scene into a timeless image.

This article showcases some examples of Dimitris photographic work, along with Dimitris’ commentary on each image.

Recently I interviewed Dimitris, to explain his love of his native Lemnos and photography.

So Dimitris, you’ve taken some amazing photos of Lemnos. What is your connection to the island?

I was born in Lemnos, but I grew up in Nea Philadelphia, which is a district of Athens. As a kid I would return to Lemnos for the summer vacations and I kept this place close to my heart; that’s why when I found an opportunity to work there, my wife – who is not Lemnian but also loves Lemnos – and I decided to stay permanently here.

What inspired you to take up photography?

Well, like most of the amateurs I started with family and travel pictures. But the image is a very powerful tool to express your feelings and as time went by, I started to search the form and means to show to others not only what my eyes can see but also the feelings behind the pictures. So I joined the Lemnos Photography Club, I attended some seminars and I believe I can proudly call myself an devoted amateur photographer.

What model of camera do you use and why?

I own a couple of old film cameras, nothing really special, I sometimes use my cell phone camera but mostly I use a not-so-modern digital camera, a SONY ILCE-6000. It is a mirrorless camera, lightweight and quite compact in size, so I can carry it easily with me since, as every photographer knows, the best camera is the one you carry when the time is right. Additionally, with this camera and with the proper adapters I can use some of my old vintage lenses.

What inspires you to take a photograph?

Most of the time, it is something I see and I believe is worth sharing it with those who are not present. But sometimes, and of course this is very important, there are certain places, certain conditions or certain times when the image in front you or around you generates feelings, and these feelings are usually more important than the image itself.

Your position as the island’s veterinarian must take you all over the island and at many different times of year and day. Have you been inspired to photograph a scene while on your rounds?

Indeed, you are absolutely right. My job leads me to visit remote places in Lemnos. So I often go off the beaten track and, this happens very often, when I post my pictures in social media, people, even locals, ask me “Where is this place” or even “Come on, this can’t be in Lemnos”

The changing nature of the environment and its juxtaposition with the built environment seems to one of your themes. What sort of themes do you prefer?

Lemnos is a rather large island, with a variety of landscapes and of course a broad horizon surround it. How can anyone resist photographing these wonders?

READ MORE: Ancient chapter is added to the Lemnos story in a novel by Aussie academic and writer "An early photo of a lonely tree at a misty night, illuminated by the spotlights of a tennis court behind the hill." Photo: Dimitris Boulotis, 2017. "This is an abandoned house of the traditional "village" architecture. Upstairs were the rooms for the family, a small porch and a storage room on the ground floor where they "park" their donkey." Photo: Dimitris Boulotis, 2020. 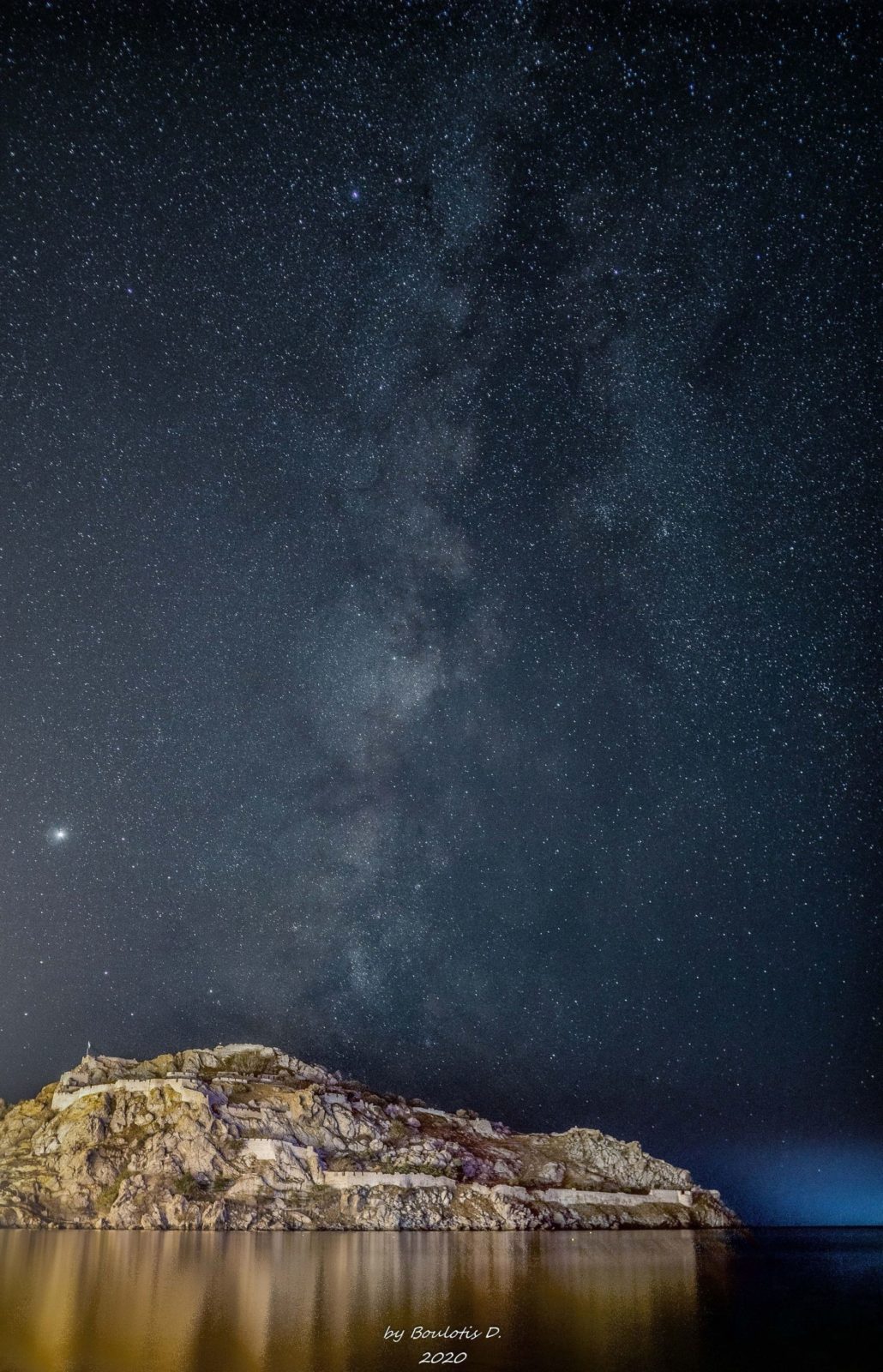 But there are also villages and small settlements, sometimes abandoned, where you can take a look at the traditional architecture, so simple yet so sophisticated and then all these landmarks, like the sand dunes, the Falakra geological site etc and the archaeological sites, offer you so many different images to be inspired.

And when you live in a rural area, away from intense light pollution how can you not look at the sky and the stars above you. I love astrophotography.

Jim Claven is a trained historian, freelance writer and Secretary of the Lemnos Gallipoli Commemorative Committee. He is the author of Lemnos & Gallipoli Revealed: A Pictorial History of the Anzacs in the Aegean 1915-16. He can be contacted at jimclaven@yahoo.com.au