From Punchbowl Mosque to Greek Archdiocese: Greek Australian Angelo Candalepas tightrope walks across the architecture of many faiths

The designer for the recently announced $27m upgrade to the Archdiocesan site in Sydney's Redfern, explains how it will bring the community closer to God

Angelo Candalepas has humble beginnings, the son of parents from the same village near Tripoli, central Greece, who came to Australia for a better life. At great personal sacrifice, they sent their four children to private schools. Also living in the family home in Stanmore, and later Campsie, were two the yiayiades and two pappoudes. The cuisine was home-made Greek. There were no Greek columns, but there were doilies in their “very traditional household with traditional values,  (and) connections to the church”. And this was the setting where young Angelo, one of Australia’s foremost architects with an elitist, scholastic attitude to harmony, grew up.

Despite being raised in a typical migrant working-class environment, Mr Candalepas is very much a “snob” when it comes to seeking the finer details, the quality of life, structure and the deeper meanings when it comes to the way we live.

Fighting against a culture which wants fast results and immediate gratification, Mr Candalepas is a man who enjoys taking his time. “In my point of view, it isn’t progressive to ignore detail,” he told Neos Kosmos.

Speaking with exactness, formulating his words, thinking before speaking, he draws the following conclusion: “Not everyone is able to contribute to society. Very few, in fact, do.”

Not everyone can leave a legacy, he states. “The difficulty is, of course, everyone expects that, because of their education, they will make a difference but the truth is they won’t,” he said, while warning about the “consequences of not considering things wholly” and the perils of monetising everything. A house in Kensington. Candalepas Associates created the project for All Saints Recreational Hall. 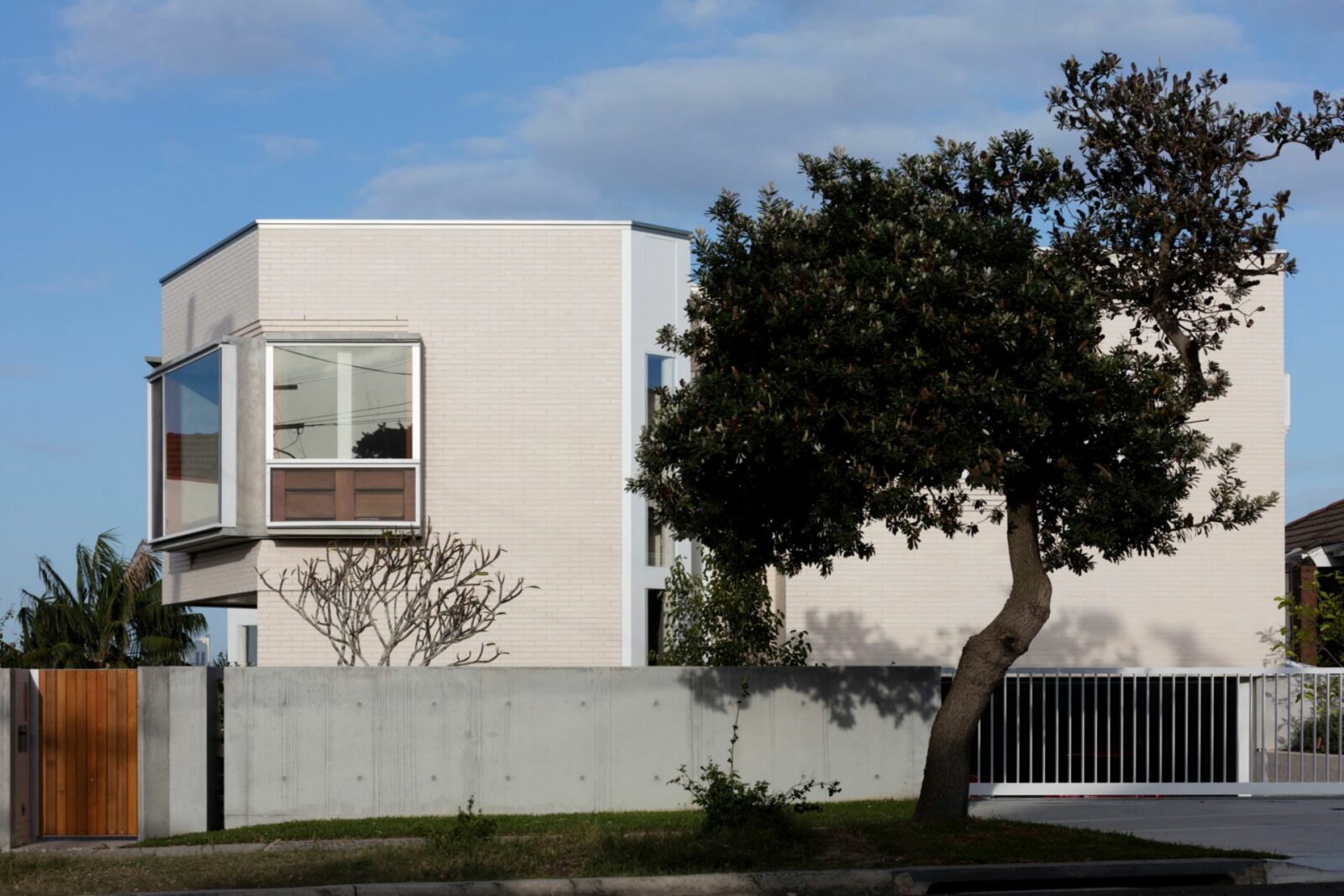 These are not perils the award-winning architect has needed to concern himself with. It’s his search for perfection that has secured him appointments on boards such as the NSW State Government’s Design Excellence Review Panel for ‘Barangaroo’ and various advisory panels for the City of Sydney, as well as an advisory role to the University of Sydney on a building-procurement panel and as a nationally elected councillor to the Australian Institute of Architecture.

The philosophy of eschatology seems to be paying off for Mr Candalepas. “It is a beautiful philosophy about the ascension into a kind of Godlike presence,” he said. “That doesn’t mean that we seek to be God; that just means that we choose to be in the image of perfection. We never achieve it. In architecture, it is very interesting because architecture represents the work of people. And the work of people – if you are faithful and understand the sense that we are spiritual beings – the work of people is also the work of God. And within what we do is therefore an embodiment of something that can be spiritual if we tap into it.”

Mr Candalepas’ desire to tap into the spiritual and being one who has that “niggling consciousness about the ethics of what they are doing”, makes him an ideal candidate for faith-based projects – most of them lucrative, because, yes, “monetisation” may be bad practice but the price of quality is also huge and despite talk of religion protecting the poor, there’s also a lot of luxury and money to be spent in spiritual buildings which praise the Lord.

Candalepas Associates have worked on various high-funded projects with religious institutions of different denominations, including St Mary’s Cathedral, a historic landmark in Sydney, and the amazing Punchbowl Mosque, a building which exemplifies the game of light and darkness in structure as it is found in the souls of the faithful who flock to it. More recently, he was invited to lead in the formulation of a long-term master plan over the next two decades, which aims to reposition the Archdiocese at the core of the Greek-Australian community.

The $27-million proposal includes upgrades to the infrastructure of St Andrew’s Theological College. A new page will open for this accredited tertiary institution, with the new design going hand in hand with the institution’s plans to enrich the curriculum to include the Greek language. The first stage envisages the careful restoration and refurbishment of the historic Cathedral of the Annunciation of our Lady, designed by famous colonial architect Edmund Blackett in 1848 at a cost of around $2 million at the time. Used as an Anglican church before being re-consecrated to the Orthodox Faith in 1970.

The plans aim to maximise the church’s 4,000-square-metre site with additions and alterations to the Cathedral of the Annunciation of Our Lady,  The St Andrew Greek Orthodox Theological College building will be demolished and make way for a new state-of-the-art facility and a new crypt will be built beneath the church.

The Honorary Secretary and Trustee of the Greek Orthodox Archdiocese of Australia Consolidated Trust, Nicholas Pappas said the masterplan was an ambitious and long-term project that will ultimately enable the Church to better-connect and engage with the Greek community.

Australia’s Archbishop Makarios said he hoped the plans would inspire all Greek Australians to develop and maintain a deeper connection to the Church, as well as to our ancestral culture, language and traditions.

Asked if architecture could change people’s behaviour and make them believers, Mr Candalepas said we should close our eyes and ask: How do we feel in a mouldy dark dungeon as opposed to an area where we are bathed in heavenly light?

“We are people from moment to moment,” he said. “What makes good people is their behaviour and if behaviour is affected by spaces in which we sit, then it makes you a better person, doesn’t it?” he said, adding that while you are in a space “for that period, you are in fact behaving in a different way”.

“Those [who] deny it are those [who] wish not to engage with the cultural dimension of what we do,” he said, explaining that it is the reason why Venice has been turned into a circus, and points to place and purpose: “the library as a space of quiet, cinemas as a place of entertainment, theatre is a place of celebration and intellectual exchange”.

Mr Candalepas is as much a believer in architecture as he is in God. “Great architecture transcends its use,” he said. “People walk into great buildings and lose all their doubts about the travesty of the human spirit.”

Of course, if anyone knows about walking through life’s contradictions, it is Mr Candalepas.

On the one hand, his education was top-notch, but not so high that he couldn’t understand the incredible stories of adversity told to him. “Stories of things that were part of people’s lives, of great difficulty, of great hardship, and as a consequence we felt incredibly privileged to not be our parents,” he said, and yet, though he rubbed shoulders with other private-school students, who probably went on luxurious holidays and the like, his own family “didn’t have the need to be able to travel” because with four private-school fees to pay and 10 mouths to feed, such dreams were out of the question.

So Greece was visited as a concept, rather than a place. “It was interesting when I finally got to Greece at the age of […] 22 years, [in] my final year in university, when I realised the values that my parents had put to us had lapsed from the populace in Greece,” he said, noticing that traditions he grew up with had lost their “relevancy” in the place where they were born. He found himself in a Greece “that didn’t exist in the minds of my parents” and he said, “that is perhaps something very familiar with the children of the diaspora”.

He said “every part of what we do as we are growing up, or every influence which comes to us affects the trajectory in which we find ourselves in”, and so young Angelo was affected by the “sense of anxiety of the whole Greek populace that has migrated here, the anxiety that their next generation will be one which would make a difference.”

Of course, according to Mr Candalepas, not everyone can, but this is the destiny, which he wishes to fulfil.