Keep calm and carry on. The stoic attitude shown by Londoners to German bombing in World War Two is legendary. But they had experienced it before. In the First World War, Zeppelin airships rained terror on London. Mediterranean and Balkan cities were not spared. Famously, Zeppelin LZ 85 was shot down over Thessaloniki in 1916, its metal carcass displayed in triumph alongside the White Tower. But did you know that a German giant once bombed the Aegean island of Lemnos?

This obscure and little-known episode took place in 1917. The story begins in Bulgaria, where the German army established an airship station outside the Thracian town of Yambol. An enormous hangar, hydrogen plant, and mast 40 metres tall were erected.

At first, the German airships flew in support of the Ottoman Empire against the Russian Imperial Navy in the Black Sea. When Russia ceased to be a threat, the Turkish high command looked to attack Allied forces in the Aegean. Liman von Sanders, the German general who commanded the Ottoman army at Gallipoli, declared Lemnos the most important target, for its harbour at Moudros sheltered the main Allied naval base. From Lemnos, the Royal Navy supported Allied armies in Macedonia, protected transports from submarine attack, and blockaded the Dardanelles and Turkish coast.

At Yambol, Oberleutnant (Lieutenant) Fritz Koreuber readied his airship to attack Moudros. The German commander and his 15-man crew were seasoned veterans, having bombed Bucharest when the Central Powers overran the Kingdom of Romania in 1916.

Koreuber’s airship was Zeppelin LZ 101, a giant dirigible almost two and a half times bigger than an Airbus A380. Hydrogen gasbags filled the airship’s long, streamlined hull, from which two gondolas were suspended, with machine guns at the windows. Two tonnes of bombs were slung from the keel girders.

On 20 March 1917, conditions were perfect for a raid on Moudros. The night would be dark and moonless, and good weather was forecast over the Aegean. Zeppelin LZ 101 rose from Yambol at 5 pm that afternoon.

Sunset at 2,000 metres was an unforgettable sight. The struts and bracing wires of the Zeppelin shone like burnished gold, and the discs of the propellers flashed in the light. The airship cruised south, ploughing through heaped clouds, following the river Maritsa (Evros) to the sea. Behind, the Rhodope Mountains faded into blues and purples. Just after 8 pm, the coast was reached at Makri, then Samothrace was passed. The rugged island showed as a dark patch against a lighter sea. At 3,000 metres altitude, a southwesterly buffeted the airship, and towering storm clouds could be seen straddling the island of Lemnos. Koreuber decided to hold his course until midway between Strati (Agios Efstratios) and Lemnos, then swing to port and attack Moudros from the leeward side of the island. 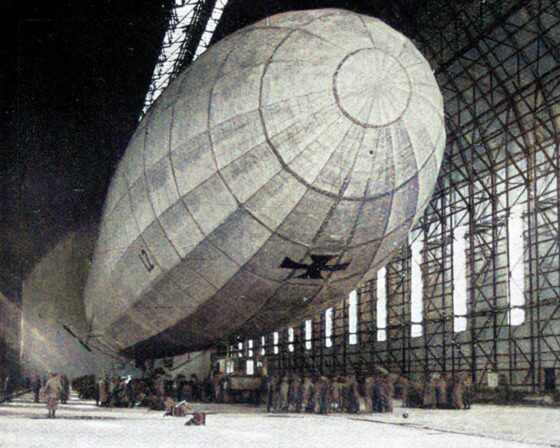 The German raider was first spotted at 11.15 pm. The crew of a British trawler saw, low in the night sky and about two kilometres distant, the unmistakable heft of a Zeppelin take shape against the star-studded black. The trawler fired two rockets to alert the harbour defences at Moudros. Soon after, the marine sentry on guard at the town pier saw the Zeppelin pass the harbour entrance.

LZ 101, buffeted by shifting winds, rounded Cape Irene and circled the island from the east. From its gondolas, the crew could see the lights of ships at anchor in Moudros harbour. Among them was HMS Agamemnon, whose guns had downed LZ 85 over Thessaloniki in 1916. Koreuber now swung the airship hard to port, passing over the village of Rossopouli. At 11.30 pm, rows of tents came into view and the commander ordered the first bombs to be dropped.

Koreuber now steered for Moudros. Bombs were dropped northeast of the town, between the Kastro (Myrina) and Rossopouli roads. The sentry at the pier saw the giant Zeppelin pass over the twin-domed church above the port. A bomb exploded in the garden of a house at the back of Moudros, then seven more southeast of the town, in a cornfield and around the football field.

The Zeppelin now reached the crowded harbour. Dazzling beams of light cut the darkness as the warships lit their searchlights. One, two, then a dozen caught the airship in their beam. Guns opened up from every direction and white clouds of shrapnel burst left and right of the airship. For six to seven minutes a vigorous fire pursued the Zeppelin. Koreuber ordered ‘up elevator!’ and the giant cruiser lifted its nose and made its escape. The German raiders had been lucky. Despite presenting an excellent target, the airship had suffered only a few rents to its gas cells. A British seaplane was scrambled in pursuit of the Zeppelin but lost its prey in the dark. At midnight, the Zeppelin passed Cape Faraklo and left Lemnos behind.

A day later, the Ottoman national telegraph agency reported that one of their airships had successfully attacked enemy ships in the harbour at Moudros, dropping 1,400 kg of bombs. Despite heavy anti-aircraft fire, the airship had returned safely to port. That part was true, but the raid had been spectacularly unsuccessful, with no targets hit. It was also to be the first and last raid by a Zeppelin against the Aegean islands. Bad weather scuppered a planned attack on Mitylene, and then all airships were recalled to Germany.

In Romanou village on Lemnos, at the cafe, the memory of the Zeppelin is kept alive in a folk tale. According to the old men of the village, an unfortunate miller and his donkey were killed by one of the bombs. The miller’s wife, on hearing the news, became distraught. It was not for her husband that she grieved but the donkey, who was much more useful!

Author Bernard de Broglio first visited Lemnos with Cheryl Ward in 2014 when mapping the location of Anzac hospitals on the island. Cheryl Ward wrote ‘Through These Lines,’ a theatre production based on Anzac nurses’ letters and diaries. Their then-and-now photographs of Lemnos have been exhibited in Greece and at the State Library of NSW. The full story of Zeppelin LZ 101’s attack on Moudros can be found in the 2021 journal of the Australian Society of WW1 Aero Historians (ww1aero.org.au). Membership starts at just $30 per year.