New York’s St. Nicholas Greek Orthodox church has risen from the ashes of 9/11 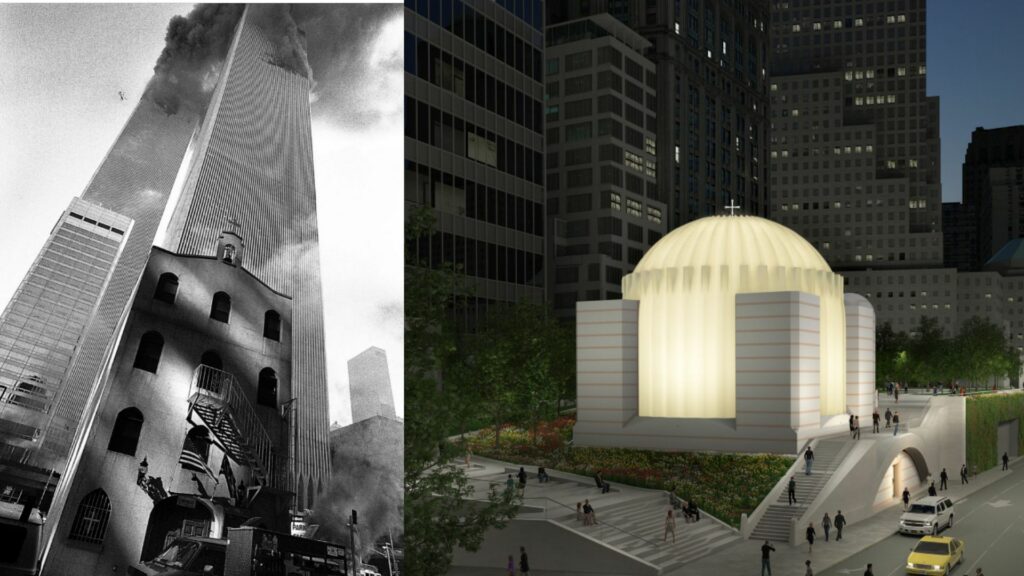 A Greek Orthodox church in New York has literally shone a beacon of light in lower Manhattan, next to Ground Zero of September 11.

The newly reconstructed church – the only place of worship leveled by attacks – was illuminated from within for the very first time to honor the lives lost on the tragic day of 9/11 in 2001.

Just as the sun set on Friday, the eve of the commemoration, the rebuilt Saint Nicholas Greek Orthodox Church and National Shrine shone bright up, thanks to more than 1,000 LED lights inside the domed sacred space, while a memorial place was being livestreamed all over the world.

Following years of delays, the reconstruction proceeded briskly this year in time for the 20th anniversary.

The $100 million project, led by renowned Spanish architect Santiago Calatrava, serves a two-fold purpose: for the reconstructed church to function as a parish of the Archdiocese, but also as a National Shrine on hallowed ground, containing a non-denominational, ecumenical remembrance room inside for people of all faiths to pay their respects to the victims and the heroes of the tragic events.

“Its doors will be open to all to light a candle, say a prayer, or just sit quietly. It will shine as a spiritual beacon of hope and rebirth to cherish the memory of those who were lost that fateful day, and to build a better future for generations yet to be born,”

a statement from the church reads.

Meanwhile, the architectural design is inspired by elements of the Cathedral Church of Hagia Sophia

In the words of Ecumenical Patriarch Bartholomew:

“The design is a tribute to the glorious beauty of Orthodox Christianity, of Hagia Sophia and Chora, as well as an acknowledgment of the present reality of a cosmopolis in the twenty-first century. May countless pilgrims gather here in peace and concord, to recall the past with reverence and envisage the future with hope.”

Following the memorial service this weekend, the shrine is going dark for another eight months, until its scheduled opening to the public in April 2022.