Nikos Tzoumanekas arrived in Australia on the Patris in 1964, during the time of post WW2 and Greek Civil War mass migration from Greece.

Like most Greek immigrants, he came for a few years to work hard, save money and return to Greece. “My brother and I aimed to buy a tractor for our farm. Back then we cultivated the land using mules,” Tzoumanekas says.

He worked in various jobs and in 1968 returned to Greece with enough money for a deposit for a tractor.

Daily wages in Greece at that time were low, around 90 drachmas. He saw that the situation was volatile and did not want to take the risk to invest his hard earned savings there. He was not a man who would collaborate with the junta regime, so in 1971 he packed up his suitcases and returned to Australia.

Nikos’ brother George Tzoumanekas, was working with Manolis Tsiotras selling goods door to door and customers would pay them in monthly instalments. Manolis Tsiortas was the first to trade under the name ‘Sympetheros’. Nikos too got a job working with Sympetheros. 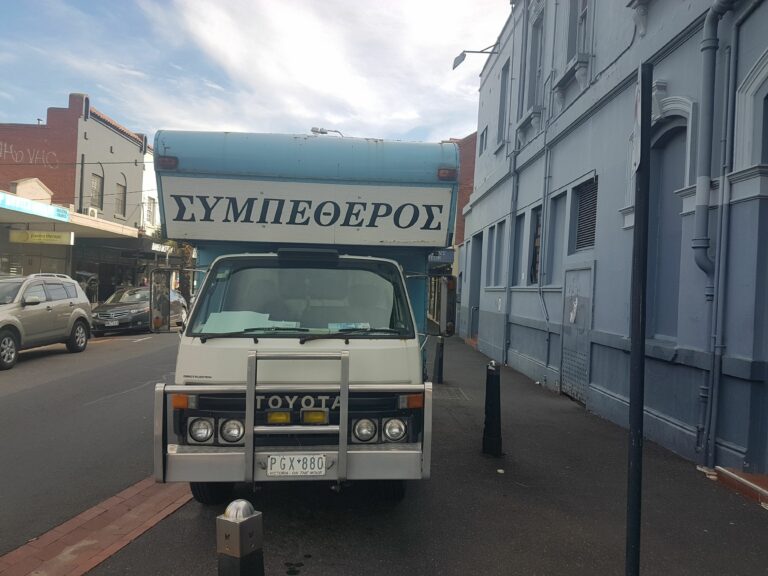 “With the help of my brother, I started working in sales but not with great confidence. In the beginning I was shy but after a while I got used to it, after all, if you start making profit and earn some money this motivates you”.

Nikos eventually bought the business from Manolis Tsiotras and till today, he operates under the name of ‘Sympetheros’.

“There was a time I reached 500 customers! All of us came to Australia with only a suitcase with a few clothes and a small icon with the blessings of our mother, wishing us good luck and to earn enough money to return quickly and safely to our homeland.”

During this time there was a demand for sheets, blankets and the like, whatever needed to set up a home.

“We had a lead in the market allowing customers to pay us back in instalments.”

In the beginning, customers bought things for themselves. Others bought with the prospect of returning, because most believed that in 3-4 years they would be repatriated. So along with the Manchester items we also sold glory boxes “Baoula”. Others bought Manchester for their children’s dowry and others to send gifts to their relatives in Greece. We did, thank God, good business but we worked hard! Many times I would leave home in the morning and come back at midnight.” The first one to have started this kind of business with the biggest turnover in sales was Costas Symeonidis. In 1968 Kyriakos Velahoutakos-Velos entered the market. Kyriakos worked with Tassos Zagorianakos and expanded the business considerably. After Symeonidis, Velos was the second biggest in sales. He had eight vans on the road, selling door to door. At the same time, he was selling wholesale to other small traders.

Next in line was Tzoumanekas. Theodores Tselepis was also doing good business before moving to Canberra where he is said to have served as president of the Hellenic Club.

Over time, many others started selling either door to door or from premises. “Marescas” was a well-established High Street store in Thornbury. Costas Sotiropoulos (Con and Martha Emporium) also set up shop on the same street in Northcote. “Iatridis” was known for his blankets, Vitsentzos, an Egyptian born Greek, had a large clientele because he spoke many languages, Costas Morfis, Marios Volitakis were also part of a list of notable traders too long to exhaust here.

Jimmy Kampouris’ shop on High Street in Preston, was known for its frames and Manchester items. Jim was quite popular in the community for his dancing skills. In fact he was known as ‘Jim the good dancer’. Armoutoglou had become very famous in the Footscray area for the quilts he sold, with son Anestis taking over the business, while Marcos’ shop on Smith Street, Collingwood, had build a reputation for selling the so called “Natasha” blankets.

Kleon Kallionidis and wife Georgia also had a shop on Smith Street and were known for their good quality quilts. Cleon and his brother Telman started making quilts while still in Greece. From the age of ten, Kleon was taught by his father to make them. As his father was a communist and was coming in and out of prison in Makronisos, the responsibility for the business fell mainly on Kleon’s shoulders. He became excellent in the craft that he later brought to Australia.

In Prahran, Grigoris Diakoumis and wife Zoe had built a very good reputation and stable clientele thanks to their honesty in transactions. Grigoris Diakoumis had started from a very young age -13 years old- as a small street seller in Athens and he loved his job. Until a year before he passed away, he would go to the markets because he liked being amongst customers.

Another good businessman was Abbotsford-based Peter Sarantakos with the P and M Materials store where he sold Manchester items, both retail and wholesale. In Preston, Panagiotis Plemenos had a well-established shop and opened many more with his Jewish partner.

Some other merchants – in the Port Melbourne area – were Petros and Haris Giokas, Anastasios Kerentzidis Athanasios Chatzis, and Thomas with the well-known brand “Gorgona”. Glory boxes were in great demand at that time.

Christos and Nikos Tzimaras, who had a workshop on Swan Street in Richmond were well-known manufacturers of the dowry chests, aka baoula.

George Stamatopoulos would also be trusted by many to make them a baoulo. Today, his son Michalis, runs a furniture display by the name “Blaze Leather Lounges Direct” opposite Epping Plaza.

There are more traders who story is noteworthy, including Giannis Frosinos – originally from Leontari, Thebes – who in 1978, when Nikos Tzoumanekas left for Greece, took over his work and George Kolovouris known by his trademark red van.

Nikos Tzoumanekas or “Sympetheros”, is one of the few Greeks who remain active in this business.

“I’ve maintained a few customers because I like to be with people. If I had not left for the second time to Greece from 1977 to 1981, today I could have a chain of Manchester shops. But it doesn’t matter, the most valuable thing in life is health.”

Tzoumanekas states happy for having a job where he meets “good people who appreciate me, because I have always been honest and fair in my transactions.”

And he gives credit to his “dear friend Panagiotis Katsimantakos, who helped me several times with accounting issues. We had served together in the Greek army and we still maintain our friendship.”

“We may not have been able to return to Ithaca but that’s no problem. Home is where you make it.”

*As Sympetheroi – in laws – were known for taking care of the dowry, for older Greeks, the word Sympetheros brings in mind Manchester items, hence the choice of the business name.

**It was practically impossible to include all traders in the article and any omissions were certainly not intentional.