Sisters and managing partners Alexandra and Kassandra Lefakinis took over the running of Valef Yachts in 2020, following the death of their father, Vasillios, the founder of the company that pioneered the first full-service yacht charter business for the rich and famous in Greece in 1969.

The daughters of “Bill” Lefakinis announced in Athens on 11 November that they will lead as managing partners running the business in Greece while their mother, Kathy, will be looking after the company interests in the United States.

The company announced that it was embarking on a “generational change and introducing a new management team led by the women of the family.”

The sisters who grew up within the family business announced this month that they would “lead the sector as owners and managing directors of Valef Yachts. They are accompanied by their mother Kathy Lefakinis, who has held the position of President of Valef Yachts since 1981.”

The sisters have announced themselves on the world with a new campaign slogan “She will lead you anywhere and everywhere” that celebrates the “power of the female”. They see the future of the luxury yacht charter business as a “holistic experience that fully embraces the elements.”

Holistic experience
Kassandra, who is co-founder OPUNTIA Luxury Oils, said that: “Greece reflects the soul. Being out on the sea feeling the elements looking into an endless horizon, your mind and heart and soul go different places. It’s a priceless experience. The biggest gift of my life has been growing up on boats. It is all about a new approach to living and access to a different world. Greece serves that in abundance with each Greek island being completely unique and in no comparison to the other.”

Her sister, Alexandra, said: “Our clients today fully immerse into the Mediterranean Sea life by having what feels like a wellness retreat experience with organic, locally-sourced food and products, on-board master chefs, water sports with numerous sea toys and fitness instructors, and highly attentive crews – all operated in full privacy.”

Their father, “Bill”, who was born in Athens in 1933, left for the US when he was 13. He studied on a scholarship at an Ivy League and graduated from the Wharton School of Business. He went to serve as a US Army soldier in Germany and in the Greek Air Force.

As tourism boomed in Greece during the 1960s, he was quick to recognise the potential of providing a discreet, luxurious and personalised service to the wealthy, glamorous and discerning. The country, which was ruled by the military junta and the infrastructure for luxury yachts was largely non-existent, also boasted a greater coastline than any other country in the Mediterranean – plenty of opportunities to explore the islands, sun and unique history of Greece.

Spotting the potential
In a 2007 interview with “The National Herald” the late Mr Lefakinis said: “At the time there were no marinas and only about 30 yachts. There was no national concept of the wealth Greece had to offer

the yachting world. Its unique history, civilization, hospitality, 4,000 islands and 13,000 miles of seashore, twice that of the Unites States where only 18 percent of the coastline is yacht-friendly, compared to Greece’s 99 percent.”

While many expressed doubts over his plans, Mr Lefakinis went ahead with his plans. He convinced 20 of the yacht owners in Greece to allow him to charter their vessels and opened an office in Pireaus that became Valef Yachts in 1969.

A hard worker and charismatic operator with an enviable contact list, Mr Lefakinis was able to land Kenny Rogers (then a member of leading rock band First Edition) as his first famous client. Other big-name clients soon followed, including members of the Beatles, Bruce Springsteen and Sting, acting legends John Wayne and Charlton Heston, Hugh Hefner and his Playboy bunnies. Diplomats, business and industry leader charted Valef Yachts and have continued to do so over the years.

He met Kathy Speece, an American from Philadelphia in Pireaus in 1978 and they soon married. The couple settled in Ambler, Pennsylvania. In 1981, Kathy Lefakinis was made President of Valef Yachts and their two daughters also played their part in the growing family business. 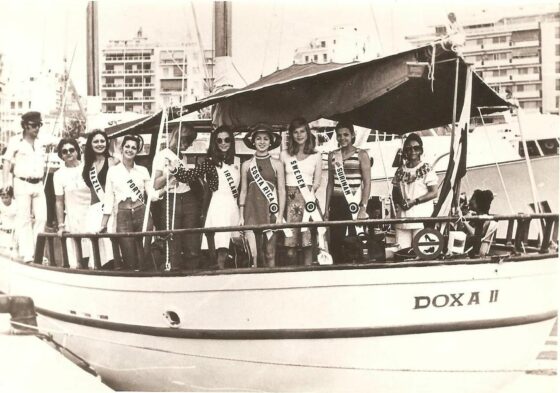 Cruising the waters of Greece on board the Aquila, a Valef Yacht vessel. Photo: Supplied Alexandra Lefakinis with Kris Kardashian on board a Valef Yacht vessel. Photo: Supplied. 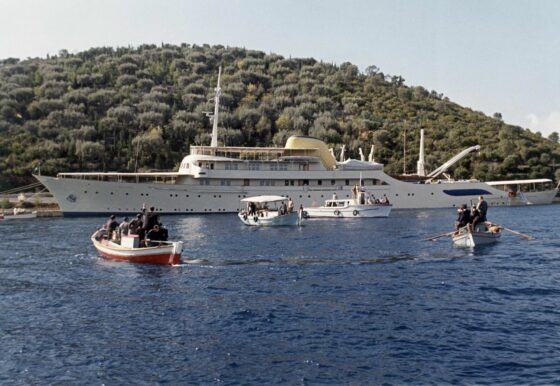 One of the historic charter vessels in the Valef Yacht fleet is the historic Christina O that was refurbished by Aristotle Onassis. The Greek billionaire bought the former Canadian anti-submarine frigate for $34,000 at the end of the Second World War and spent over $4 million to convert into a luxury "superyacht". Today the vessel boasts the latest technology and equipment Photo AP Photo

The girls spent their summers in Greece learning their father’s business.

Ever alert to marketing opportunities, Mr Lefakinis ensured the company featured in travel shows, fashion and high-profile events. He even brought the Miss Universe to Greece – the first time the beauty pageant was held outside the US. The Kardashians filmed episodes of their show on board company charter vessels. Valef vessels featured in a James Bond film (“For Your Eyes Only”) and episodes of The Love Boat.

Today his daughters look after 400 luxury vessels that take exclusive clients throughout Greece and the Mediterranean. The vessels range from 20m to 100m long and a weekly charter rates range from $16,000 (US) to $647,000 for a party of 36 people.