Lily Maglaras, 17, is an aerialist at the Circus Royale currently based in Melton. Photo: Alex Economou

Just a few weeks ago Lily Maglaras was at home in Warrnambool writing her VCAL exams. Before even the ink had dried on the papers, the 17-year-old, with her parents’ permission, was literally off to join the circus.

Just weeks into her new career, she is talking to Neos Kosmos about her new life as a solo-performing aerialist with the Circus Royale in Melton as though she has been doing it all her short life. In a way she has because she has honed her skills in the air she was 10 when she joined PhysiPole an aerial fitness programme centred on pole dancing as well as other aerial disciplines.

“It started as an after-school activity but I became more interested. I loved doing it and the people were so positive,” she said.

After five years of training where she found she had affinity with the Silk, a four-metre long material and the hoop, she became a kids and teens aerials instructor at the studio. She learnt to develop her own choreography and help others with theirs, and she took part in competitions – some at state and national level.

Through the competitions she learned to perform before an audience although she has found the circus audience has different expectation.

“The people in a competition audience are more critical as they know what you are doing, but the circus audience is more open and less critical,” she said.

Her first circus performance was nerve-wracking. She had tried out at the circus in July when it was based at Caroline Springs. Unlike conventional trapeze artists who share a performance, she was alone, with the audience and instead of the four-metre Silk she was used to at PhysiPole, she found herself having to work her way up a 10-metre pieces of material before a live audience.

“I had experience (of performing before an audience), but I was very nervous in my first show – I did not understand how high it was compared to the studio, and it was more tiring.” 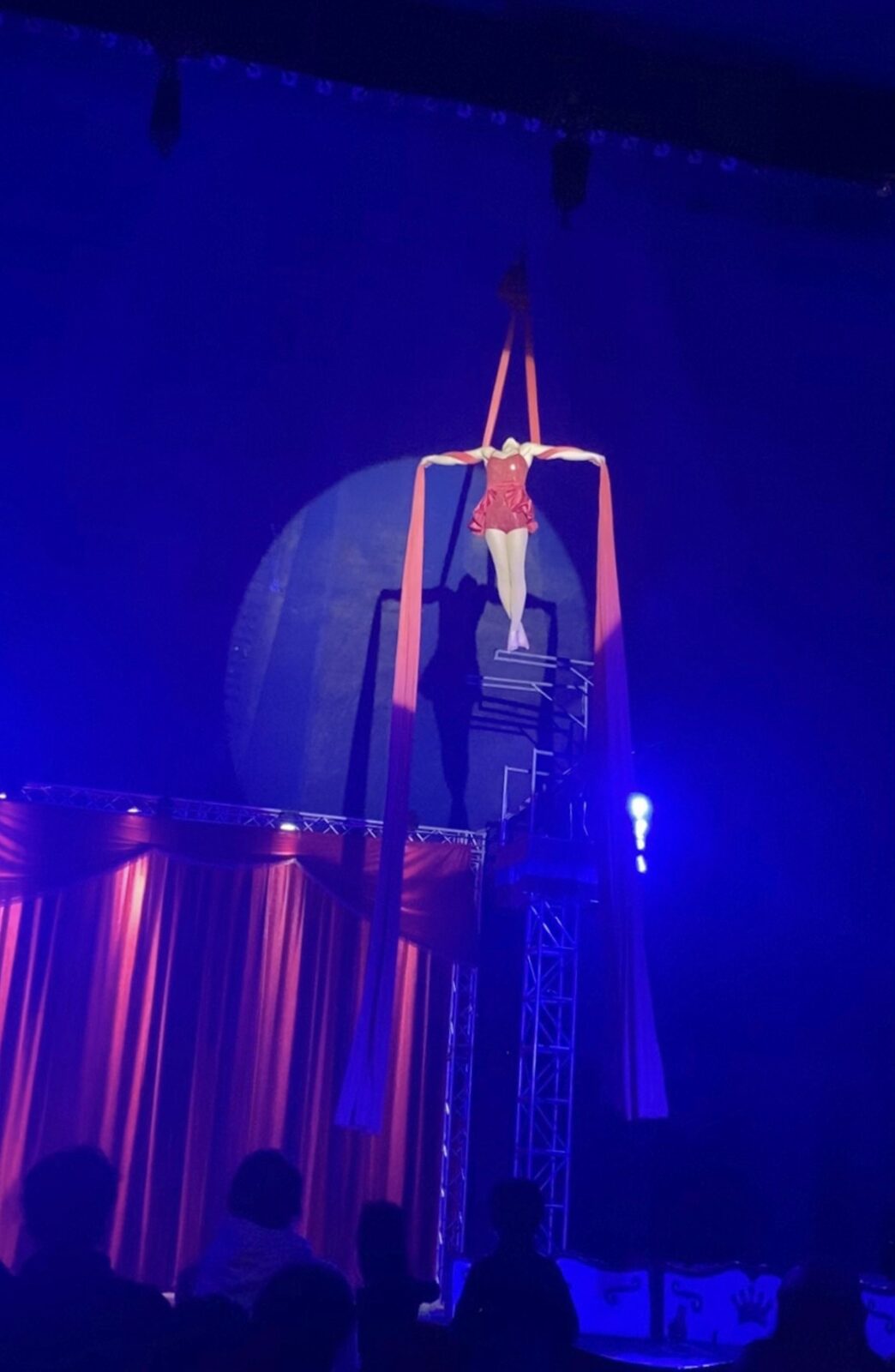 High up performing with the "Silk". Photo: Supplied 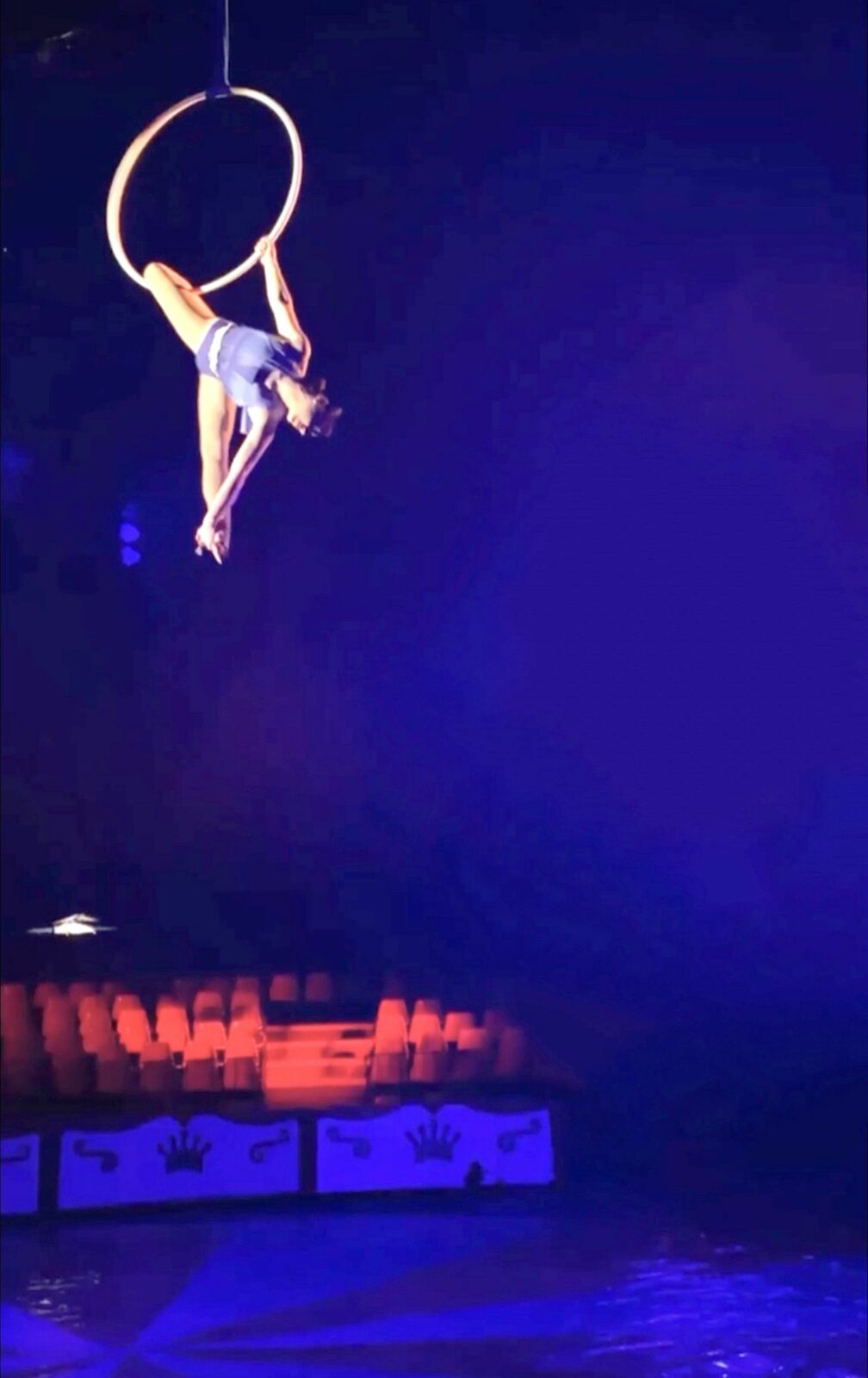 Lily on the Hoop. Photo:Supplied Essentially the routine starts on the ground, and she works her way up the Silk to the middle to perform another series of choreographed moves before going to the top and then down again.

“I do drops on my silks, wrap my feet around them and fold over myself and roll and rotate. You do it to a set routine.

“You want the audience to enjoy the routine. You know you have engaged with them when you hear people gasping and clapping and then a good round of applause (at the end of the routine) and then after the show they will come to me and offer feedback.

“I will look at routines on Youtube and Instagram and when I am in the car listening to music I will be working out tricks and imagining how they will work. If I feel something is not working with the audience, I will either change it or work more on it.”

“Over the years I have worked a lot of routines for competitions and I have prepared routines for my students and for concerts at the PhysiPole studio.”

The process of training and performing, she said, can be painful. She gets burns from working with the silk and bruises from some tricks. The Lyra Hoop, her other aerial apparatus, while padded, is made of steel and can also cause bruising.

“You can get hurt doing drops or from overworking muscles that get sore. You have to know when to rest them.”

She said a basic rule was it was okay if bruised muscles felt uncomfortable during training, but not if they the routine caused pain.

“Pain is a warning and you need to look at where you are going wrong with what you are practising.”

When she works out a new trick, she likes to see her instructor or friends try out and then work out  how she can further develop it.

The life of the circus is very different to what she was used to at home.

“I left my family. It is different here and it was scary at first, but I still talk to everyone (at home) each day and that has made it easier for me.

“My parents, Dimitrios and Rebecca, have been supportive and proud of me and also scared for me,” said Ms Maglaras.

Her pappou Kosta came from Skilonthia, Peloponnese, to Australia in 1971 and yiayia Voula migrated from Aspra Spitia, also in Peloponisos, in 1968 and they married in 1974.

Ms Maglaras was born in Melbourne and the family moved to Warnambool when she was 10. Her father is a care worker and her mother works for the Departhment of Heath and Human Services (DHSS)

“I have a younger sister, Elisa, and two younger brothers. Arlo and Costa. They miss me, but I think they are happy for me,” she  said.

Life at the circus could not be more different. Along with her own daily show, she also helps out as the magician’s assistant and being sawed in half or suddenly appearing out of the flames before an amazed audience is part of her new life.

“I am the youngest one (working at the circus) and I am learning showmanship. You have to be there for everyone else not just for yourself, they are part of you. Sometimes I can tell how the audience will react. A smaller audience is more reluctant to applaud than a bigger audience.”

It takes an hour to prepare for her act and then she has to go to the front to run some of the stalls with games and the jump castle before she performs her act and assists the magician. The performances are over by 9.30pm and then there is just time to eat and shower before the lights go off at midnight.

Being a circus, she lives in a camper and if it rains the ground outside is muddy or dusty, if it does not. Each day she runs the gamut from a group of performer geese who like to nip at her ankles as she passes by.

“There are a lot of jobs to do and responsibilities but I love it and I would not trade it for the world. I love the opportunity to perform. Living the circus life is like being part of a small family and I enjoy being around them.

“My goal is to keep performing for a few years and save money to open my own studio and run a circus school. I have always wanted to work with children and other people and when I saw this was way I could do it, well, it has gone on from there.”