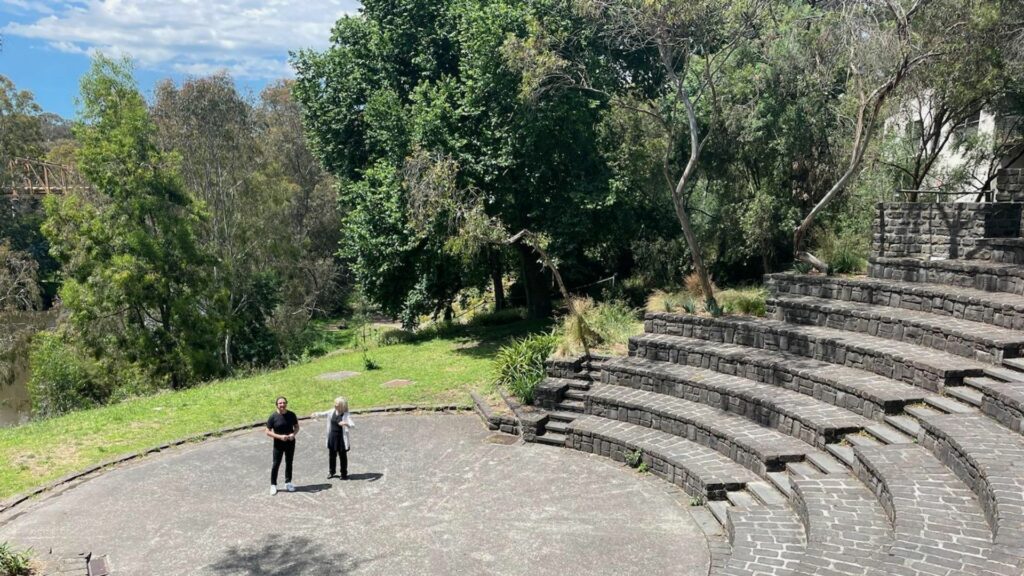 The campaign to protect Fairfield Amphitheatre is gathering steam. This is Victoria’s only Ancient Greek-inspired theatre and its only professional outdoor theatre (that is public).

Many of Melbourne’s Greek community have joined the call to protect, preserve and enhance this phenomenal, professional outdoor theatre which is unique in Victoria and Australia.

We have seen local MP Ms Kat Theophanous and Upper House MP Mr Lee Tarlamis OAM – both of Hellenic heritage – join with the Greek community, Greek language students and NUGAS to declare their support for the campaign.

Recently Mr Bill Papastergiadis OAM – President of the Greek Community of Melbourne – wrote in support of the Amphitheatre to key decision-makers who will soon determine its future. These include the Victorian Government’s Planning, Creative Industries and Multicultural Affairs Ministers, as well as local MPs, Yarra Council’s Mayor and relevant councilors.

Mr Papastergiadis’ intervention asks the Victorian Planning Minister to ‘call in’ the proposal that is currently before the Heritage Council. He rejects the proposal to break up the integrated Amphitheatre complex and says the Fairfield Amphitheatre complex is deserving of state heritage protection. He also calls for the Victorian Government to recognize the Amphitheatre’s cultural, multicultural and architectural significance.

Mr Papastergiadis was happy to lend the support of the Greek community to this important campaign. As he pointed out, the broader Greek community was actively involved in the push to establish the Amphitheatre. In 1983, it joined the local Stork Theatre to support its bilingual productions of Greek theatrical productions and festivals at the original pop-up amphitheatre at the site. Many Greek-Australian actors starred in these early performances. More recently, in March 2021 the Amphitheatre hosted Stork Theatre’s 8-hour Performance Reading of Homer’s Iliad. The sell-out audience included our local Greek Consul, Mr Emmanuel Kakavelakis. “Even the bluestones of which it is constructed were drawn from local streets, where many of Melbourne’s Greek community settled and made their new homes”, Mr Papastergiadis said.

“This complex is of immense significance to Melbourne’s Greek and wider community, as a celebration of our common cultural heritage, as a symbol of Melbourne’s multiculturalism and the coming together of our community”, he added.

“I know that I speak on behalf of Melbourne’s broader Greek community when I say that the whole complex should be preserved, cherished and enhanced by the Victorian Government – rather than face an uncertain future. The Greek community of Melbourne is proud to support this community campaign”, he concluded.

Recently Mr Papastergiadis met with Stork Theatre’s Ms Helen Madden at the Amphitheatre to discuss the campaign and plans for its preservation and enhancement. At the meeting Ms Madden welcomed the support of the Greek community.

“The stunning Fairfield Amphitheatre was created through a joining of forces of Melbourne’s cultural community. We hope that that this community will now join forces again to demand that the Amphitheatre complex be protected for future generations. The timely intervention of Mr Papastergiadis symbolizes this effort. We are hopeful that the powers that be will listen and decide to protect the integrity of this incredible cultural icon”, Ms Madden said.

If the Victorian Planning Minister does not intervene and ‘call it in’, the Heritage Council’s decision is due by mid-January 2022.

Anyone interested in supporting the campaign should contact Helen Madden via email at hvmadden@optusnet.com.au – or on her mobile 0417 589 987.

Jim Claven is a trained historian, freelance writer and published author. He studied the classics at Melbourne’s Monash University, has reviewed some of Stork Theatre’s recent classical performances, including at Fairfield Amphitheatre, and is a supporter of the campaign to save the Amphitheatre.