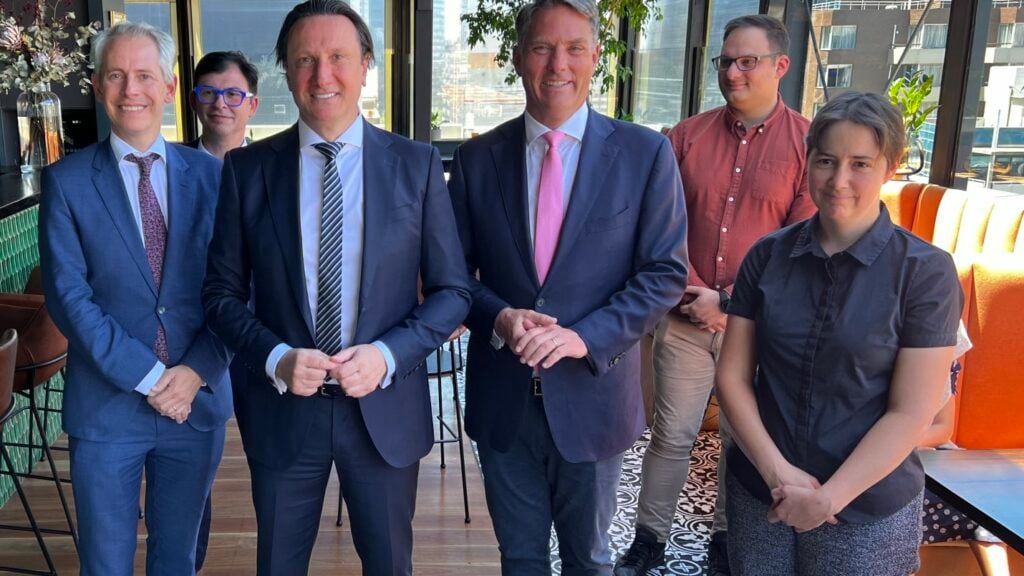 On Monday 20 December, the President of the Greek Community of Melbourne Victoria (GCMV), Mr Bill Papastergiadis, and members of his committee hosted the federal Deputy Opposition leader Richard Marles and the Shadow Minister for Multiculturalism, Mr Andrew Giles at the Greek Centre in Lonsdale Street, Melbourne. Also present were board members Chris Sikavitsas, Tass Sgardelis, Leo Vlahaki and Vasso Zangalis.

Mr Papastergiadis and the GCMV have been particularly active over the last year in ensuring that the government and the opposition are aware of the work the GCMV carries out  education, language, culture as well as advocacy on the issues impacting on the Greek Diaspora.

Mr Papastergiadis welcomed the two leaders of the ALP and emphasised that the Greek Centre represents Greeks in Melbourne, and the community’s multi- story building was a global Diaspora centre.”

“This is a centre that offers culture, language, advocacy, and contributes significantly to the cosmopolitan and multicultural fabric of Australia.” Mr Papastergiadis said.

He went on to underscore that the Greek Community of Melbourne has for many decades enjoyed “bipartisan support from both major parties, the Liberals and the Labor.”

He said that when in power the “Labor government worked with us on a number of issues including the tourist working visa agreement, where Greece was one of the few countries globally that didn’t have an agreement with Australia.”

Mr Papastergiadis said that numerous other agreements with Greece, such as double taxation and the health agreement, that the GCMV is initiating have  “ broad by support of both major parties here.”

Deputy Labor leader Mr Marles beamed and said to celebrate Greek culture and heritage at the Centre, “is about as Australian as it gets.”

“It is what makes the tapestry of our nation so rich, and so wonderful, and we all had the pleasure of experiencing the Antipodes festival every year in Lonsdale St.

“Bill it’s a real privilege to be at the centre, it is impressive, in what it does, and you definitely get a sense that the Greek Australian community is in good hands.”

Mr Marles thanked  the Greek Community and the broader Hellenic community of Australia for “the enormous contribution to Australia.”

The Shadow Minister for Multiculturalism, Mr Andrew Giles followed with an attempt to say Kala Christougena (Happy Christmas). He joked that  his language skills were “not as impressive as they could be.”

Mr Giles underscored the “good work” that the Greek Centre does both in “representing the Greek community but also as a leadership community for other diverse communities and emerging ones.

The Shadow Minister said that if Labor won government that their commitment to the Greek Community and the Greek Centre would be unwavering.

He indicated that further discussions needed to be had on the maintaining and teaching of Greek and he  supported the inclusion of more community languages in primary and high schools.

Neos Kosmos asked if the shadow minister was concerned with the absence of any substantial Greek, Roman and other history from the Australian Curriculum, Assessment and Reporting Authority (ACARA) proposed curriculum.

Mr Giles said that like his leader Anthony Albanese  he felt that knowing history, including that of the First Nations, was important in “developing a sense of citizenship and a greater understanding of how Australia developed.”

Mr Giles  said he understood aspects of the government education minister’s critique of ACARA’s proposed curriculum, but did not agree with the way “he handled the critique, he ignited culture wars, we can be critical and should have a deeper and respectful discussion when developing a national curriculum.”

Mr Giles added that the people should not forget that “the ACARA proposal was just that, a proposal” and there is a way to go before any agreement is reached.

After more discussion on issues of diversity, culture, racism and the impact of COVID-19 on the Greek community, Mr Papastergiadis and members of the educational committee of the board of the GCMV sat down for a Greek lunch.