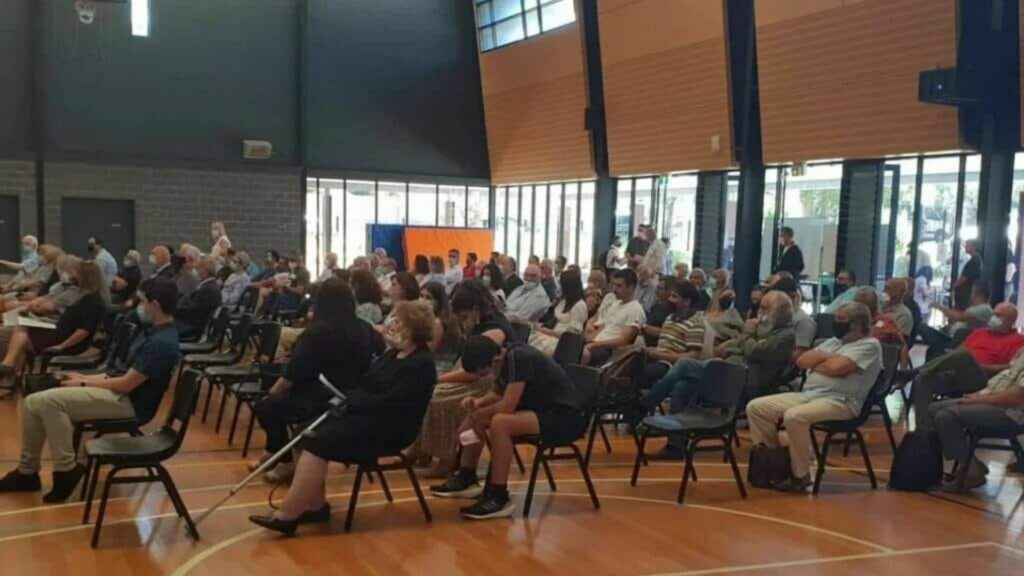 From the Greek Community of Melbourne's Annual meeting. Photo: Supplied

The upcoming February 6th elections for the new Board of Management of the Greek Orthodox Community of Melbourne and Victoria (GOCMV), as well as the fact that this oldest and largest Greek community organisation in Australia is celebrating its 125th this August, present us with a unique opportunity to initiate an in-depth public discussion about the present and the future of the GOCMV.  In my opinion, every candidate for the Board needs to state openly and publicly his/her vision for the organisation, if we want to ensure that the Community retains its status as the leading secular, democratic and representative Greek organisation in Victoria.

Prior to the onset of the post-World War II mass immigration program to Australia, the GOCMV was an organisation run by the business elite of the then numerically small Greek community in Melbourne and Victoria.   It was fulfilling a leading educational, cultural, social and religious role (running churches) within the boundaries of the community, but it was not really engaging with the Australian mainstream.  The creation in the late 1950s of suburban community organisations by the Greek Orthodox Archdiocese of Australia, run by the Church along a parish model, weakened the up until that moment dominant role of the Community of Melbourne.  However, the post war mass immigration program which brought to Melbourne tens of thousands of Greek migrants, during the period 1955-1975, as well as the societal, political, economic and other identities and experiences of the newly arrived migrants, both in Greece and in Australia, changed significantly the composition and the nature of the Greek community in Melbourne and subsequently of the GOCMV.

During the past 50 years, the Greek Orthodox Community of Melbourne and Victoria has been a mass organisation, with more than 8,500 members in the early 1980s.  It has been a broad democratic and secular organisation, which attracted the interests of community members from all walks of life, factory workers, university graduates, professionals, pensioners, small businessmen and others from the entire democratic political spectrum, to the left and to the right of centre.  The organisation was always actively involved in wider struggles that advanced the interests of Greek and migrant/multicultural Australia.  It played a leading role in education, it enriched the parameters of Greek and of Greek-Australian culture and identity, it managed to win the recognition and the respect of the wider Australian community, as well as the Australian and Greek states and other Greek diaspora communities globally.

I am running as a candidate for the Board of the GOCMV, after being a member of the organisation since 1984, because I am of the opinion that the representative, the democratic, the intellectual policy depth, the interventionist role of the Community, when it comes to addressing wider issues of concern to the Greek-Australian community, all these characteristics are not as sharp as they used to be.  Of course, it goes without saying that I do honour the work and the achievements of all the previous Boards of Managements in the 125-year history of the organisation, including the work and the achievements of the outgoing Board.   The proposals that I wish to put forward for discussion and hopefully for adoption,  will advance I believe the interests of the organisation, as well as the interests of the wider Greek-Australian community in Melbourne and Victoria.

1. In my opinion, mass organisations like the Greek Orthodox Community of Melbourne and Victoria (GOCMV) are, or should be, of greater importance than the individuals who come along to serve on the Board of Management, regardless of how well these individuals might have served the interests of the organisation.  The members of the Board should be viewed as members of a relay baton track and field team, who are there running to ensure the success of the team.  If for example the president of the most powerful country on earth, the president of the USA, has a two four year term constitutional limitation for his office, then, there is no reason as to why the members of the Executive, not just the president, of the GOCMV, need to stay longer than two or three terms.  This proposal does not exclude them from serving as ordinary members of the Board, for a bit longer, contributing this way their valuable experience.  However, there is no real need for them to occupy positions on the Executive. A constitutional guarantee is needed which ensures  that the leadership team of the GOCMV will be renewed often.

2. Whenever the issue of female representation on the Board of Management is raised, the discussion, in my opinion, is opportunistic, is tokenistic, is paternalistic.  A constitutional change, again, needs to ensure that the number of women to the Board is at least equal to the number of women who are members of the Community.  Female participation by at least 50% must be a constitutional requirement for every aspect of life in the organisation, membership, Board, Committees and Subcommittees, etc.

3. We have to ensure that the mass, secular and diverse characteristics of the GOCMV are reflected in the composition of the entire membership of the organisation.  The Australian Greek community is much more diverse, is much bigger and much more interesting than any of its institutions.  Our efforts to include wider and more diverse sectors of our community in the life and in the management of the GOCMV should be continuous.   In order to ensure this, the 19-member Board of Management needs to retain its current numerical strength.  Any possible arguments to the contrary of this principle can only marginalise the organisation.

4. The mass and diverse characteristics of the GOCMV and its Board of Management can also be strengthened, by considering the option of adopting a more representative voting system.

5. The strength and the strategic advantage of the Greek Orthodox Community of Melbourne and Victoria is its mass membership, its secular and democratic nature, the fact that the community is defined and unified by universal common characteristics such as ancestry, language, culture.   The Community is not and cannot become for example a charity organisation, or a business association/council.  We already have, as a Greek-Australian community, reputable charity or business organisations, that look after the interests of their membership and of their clientele.

6. The main role of the Greek Community of Melbourne, apart from its cultural and educational activities, should be to advance the interests of Australians of Greek descent in the state of Victoria, in Australia and in Greece, in every public and private sphere.  That is local, state, federal government, parliament, bureaucracy, business, whose activities might impact on the welfare of the community, etc.  Representations and advocacy of such a nature should be made in both Australia (primarily) and Greece.  The organisation should provide expect advocacy and mediation, based on wide consultations with diverse sectors of the Australian Greek community.

7. The interests and the welfare of the Australian Greek community can be secured and/or advanced better, when leading organisations like the GOCMV are actively engaging in conversations and are actively seeking to enlist allies from the wider multicultural and societal mainstream in both Australia and Greece.

8.  The principles of transparency and collective leadership should be advanced even further, by introducing relevant constitutional amendments.

9. The already significant educational and cultural component in the life of the GOCMV needs to be supported and expanded.  The Community needs to build on its strengths.  The time has come for the Community to establish for example its own Publishing House in order to highlight aspects of our history and of our culture.  The time has come to establish a fully functional Library.  It is time for the GOCMV to establish a gallery, perhaps at the newly acquired building at 272 Russell St in the, where we will be permanently exhibiting our artistic creations.

10. If we are to ensure the future of the organisation, then, we need the encourage the involvement of a critical mass of members with the affairs of the Community.  An active membership is a strategic strength that ensures the longevity and relevance of the GOCMV.  The various Committees and Subcommittees that already exist need to be reactivated and expanded.  The considered proposals of the Committees should be included for consideration in the decision making process of the Board of Management.

11. In order to ensure the future of the organisation, we need to establish a “Young” Leadership Training Program, where amongst others, aspirants for leadership roles should be introduced to the history, the achievements, the aims, the objectives, as well as the networks of influence that already exist, of the entire Australian Greek community and of the GOCMV.

12.  Finally, the relationship of the GOCMV with the Australian and Greek states has to be upgraded politically and needs to be institutional, rather than personal or individual.