Joel Christensen Senior Professor of Classical studies at Brandeis University, and a Fellow at the Center for Hellenic Studies draws a comparison between Russia’s imperialist aggression and Athens’ destruction of Melos. 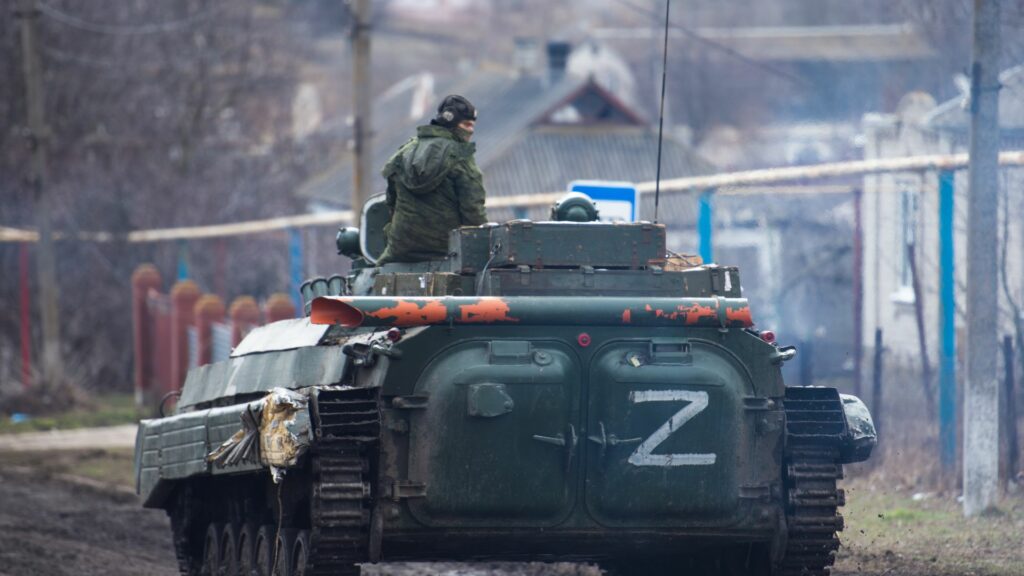 In the first few days of the Russian invasion of Ukraine, the Mayor of Knox County Tennessee and former professional wrestler, Glenn Jacobs, tweeted in response to public concern, “Historically, in the real world, might makes right. Weakness….is not a virtue. It is a fatal character flaw.”  Such a muscular posture was aimed against the political Left, dismissing humanitarian concerns with cruel realpolitik.

Such praise of power has reminded many of the famous debate over strength and justice in Thucydides’ “Melian Dialogue”; and it also speaks to the terrible logic of imperialism in general.

The Melian Dialogue and Power

In the fifth book of his history of the Peloponnesian War (84–116), the Athenian historian Thucydides recounts a striking debate between the envoys of Athens and the leaders of the island of Melos or modern Milos, Μῆλος. The hostilities between Sparta and Athens had been suspended by the “Peace of Nicias” in 421 BCE after a decade of plague and conflict.

By 416, however, Athens was expanding again, about to embark on a massive expedition to the west in Sicily, also reinforcing its strategic control over the Aegean to the east. According to Thucydides the Melians were originally a Spartan colony that had stayed neutral in the war between Greece’s most powerful states. Nevertheless, the Athenians attacked their territory and plundered it.

“The Melians are a colony of Lacedaemon that would not submit to the Athenians like the other islanders, and at first remained neutral and took no part in the struggle, but afterwards upon the Athenians using violence and plundering their territory, assumed an attitude of open hostility.” Thucydides, The Peloponnesian War 5.84.

The conversation between the Athenians and the Melians is unique in Thucydides’ history for is dialogue form and its content.

The Athenians start by declaring that they will not bother with providing any pretenses for the conflict. Instead, they simply state that “what is right only matters between equals in power while the strong do what they are capable of and the weak suffer,” [Thucydides, The Peloponnesian War 5.89.]

In response, the Melians appeal to the core danger of such an argument: if shared values and morality are abandoned,  at the very least, the Athenians should worry about precedent, “our shared safety” (5.90), what a modern speaker might casually call “karma”.

According to the Melians, if the Athenians disregard justice when they are strong, they cannot rely on it being there to protect them when they are not.

In what is a great disappointment for admirers of Athenian culture and philosophy, the envoys of the city do not seem to care about ‘justice’. Instead, dealing from a position of power, the Athenians act in favor of their “domain” or ἀρχή arkhē – often translated as “empire”, 5.91), which, by their own logic, is to mutual advantage since Athens benefits from not destroying Melos and the Melians benefit from avoiding the worst. For the Athenians, neutrality is not an option because allowing it would be a sign of Athenian weakness.

The Athenians dismiss Melian claims to divine reproval as quickly as they wave aside appeals to justice and they insist that they have no fear of the Melians’ allies because “the Spartans demonstrate exceptional excellence concerning their own interests” (5.104). The Athenians starkly propose that security is a matter of what is advantageous and that caring about justice brings avoidable danger to the party in power. After the dialogue, the Melians refused to surrender; the Athenians maintained their siege. Eventually they broke the city’s defenses, killed all the men, and enslaved the women and children.

The turns of this debate may make many uncomfortable today. For me, the argument of the Athenian envoys indicates the close relationship between Athenian cultural accomplishments and their imperial power. But it also emphasizes that the “historical truth” of “might makes right” is a choice rather than an immutable natural law. The Athenians did not destroy Melos because they had to; they chose to attack Melos due thanks to a strategy of expansion and a concern about seeming weak before their other allies and subordinate states.

The debate is also honest. In contrast to modern rhetoric that makes flimsy excuses for imperial expansion (e.g., “weapons of mass destruction” or “de-Nazification”), the Athenian envoys are refreshingly direct as Thucydides presents them. In later years, Athenians may have downplayed the significance of their actions during the war. The orator Isocrates, famous for calling for Greece to unify and attack the Persian empire in the 4th Century BCE, claims that the treatment of Melos was necessary to maintain Athenian power and adds that  it is commendable that the Athenians only rarely resorted to such behavior.

Isocrates seems to be responding to criticism of Athenian crimes against other Greeks (rather than non-Greek peoples). The implicit assumption that the exercise of power and slaughter of others is in some way less reprehensible is as much an inheritance of ancient Greek thought as Thucydides’ immortal history. Social media responses to sympathy for the Ukrainians and the welcoming of millions of refugees into Europe have highlighted the stark truth that we care about the suffering of some human beings more than others.

Unprovoked war against Ukraine is no more justifiable than the Athenian siege of Melos and the U.S. Invasion and occupation of Iraq. The shock it inspires in the “West” should remind us of the depth of our own historical prejudices and the continuing damage of imperialism.

The Athenians and a bellicose mayor from Tennessee both sound the natural advantage of power. But the Melians–and all those who suffer at the hands of invading and occupying forces–give voice to something more humanizing: an idea of justice that transcends power, a concern for divine judgment, and the understanding that all power eventually wanes.

*Joel Christensen is Professor and Senior Associate Dean for Faculty Affairs at Brandeis University. Professor Christensen has been a Fellow at the Center for Hellenic Studies (2013) and has received the Society for Classical Studies’ Award for Excellence in Teaching at the Collegiate Level (2013).He has published a “Beginner’s Guide to Homer” (One World, 2013) and also a “Homer’s Thebes” (CHS, 2019) with Elton T. E. Barker as well as “A Commentary on the Homeric Battle of Frogs and Mice” (Bloomsbury, 2018) with Erik Robinson. In 2020, he published “The Many-Minded Man: the Odyssey, Psychology, and the Therapy of Epic” with Cornell University Press.