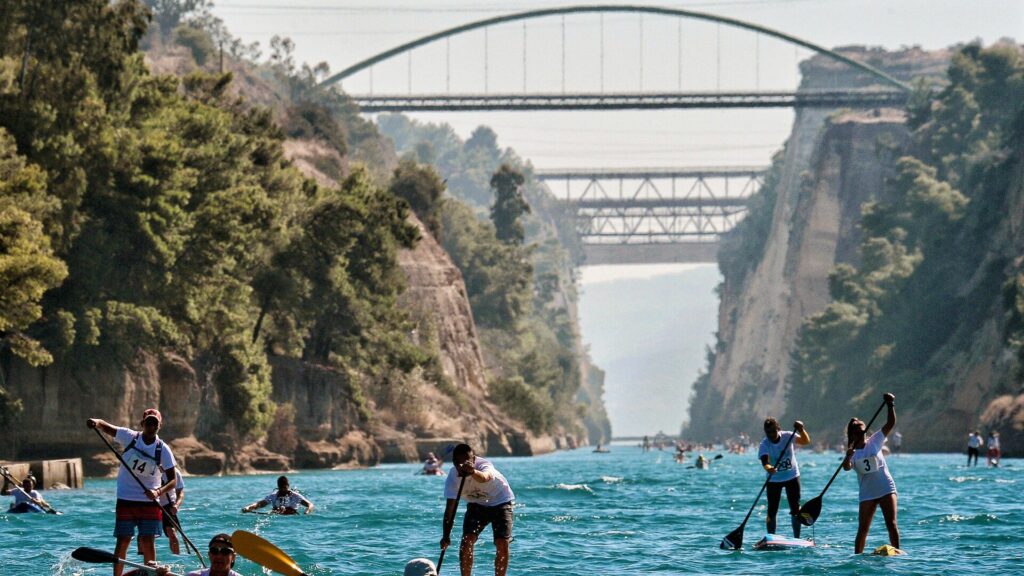 Some of the smaller vessels that have used the Corinth Canal. A file image shows Competitors taking part in the second Corinth Canal Paddle Crossing in October 2017. Photo: AAP via EPA/Vassilis Psomas

After 18 months of repairs in the first part of its €32 million or $AU 47 million restoration, the Corinth Canal re-opened on July 4 and within its first week of operation 400 vessels already made use of the man-made short cut between the Aegean and Ionian Seas.

The canal’s managing company, Corinth Canal SA, expects close to 7,000 will have used the canal by October when the second phase will come into force.

Under normal circumstances, such as in 2019, Greek News Agenda reported 55 percent of the 11,417 vessels that used the 6.4km-long canal were related to tourism with vessels ranging in size from small tourist craft to merchant ships, cruise ships and oil tankers.

The second-phase of the restoration project will take place in the autumn and is aimed at reducing the risk of landslides and will further strengthen the canal rock walls. A 3.5km long paved and fenced footpath is to be built that is part of a plan to allow visitors safer access along the canal and will also increase its status as a tourist attraction in its own right.

Other aspects of the canal infrastructure will be modernised to include online services and ticketing for smoother more accessible use of the canal.

The general manager of Corinth Canal SA, George Zouglis said the work on the canal, as well as upgrades of the wider area would by 2024 provide more support for local tourism and provide a modernised hub for maritime transport. He said the restoration project which was being carried out by the Greek Ministry of Infrastructure and Transport as well as Hellenic Corporation of Assets and Participations, would maximise the canal’s value not only to the regional economy but to the nation as a whole.

Over the millennia there were numerous attempts to cut a canal that would drastically shorten the sea journey between Ionian and Aegean Seas.

It was only in 1882 that then Prime Minister Charilaos Trikoupis gave the go-ahead for the work to begin. Trikoupis was the canal as a symbol of the modernisation for Greece.

The canal took 11 years to complete.

It’s cost as well as systemic corruption led Trikoupis to famously declare in parliament in 1893, “Regretfully, we are bankrupt”.

The canal remains a lasting legacy to his modernizing ambitions. Trikoupis’ other great legacy was allowing the first modern Olympic Games to take place despite his misgivings over the cost.