The hidden history of the Parthenon

In the lead up to the National Gallery of Victoria’s architectural installation “Temple of Boom” in November, Dean Kalimniou reflects upon the often forgotten history of Western civilisation’s most enduring symbol 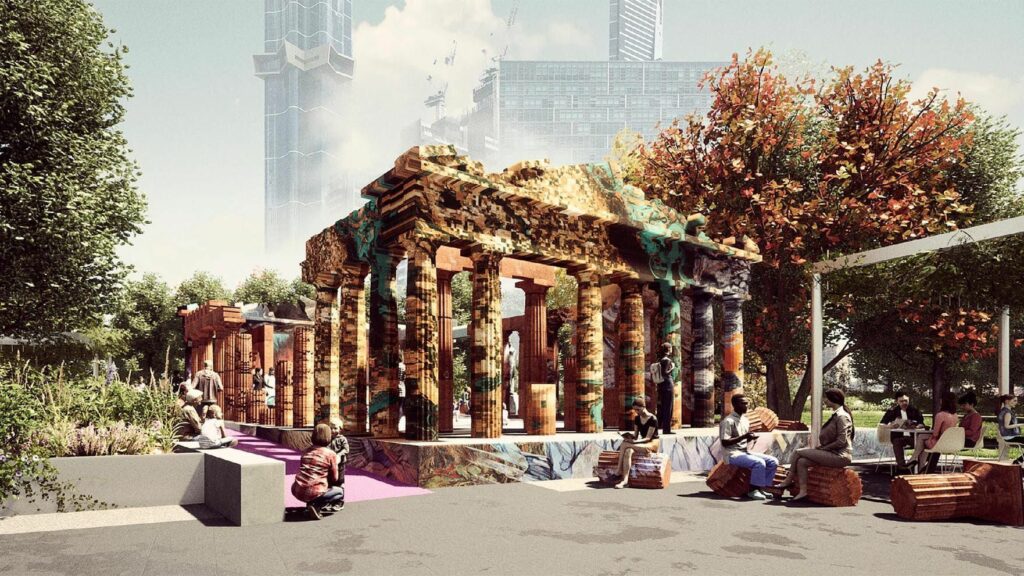 It is a natural Austro-Hellenic knee-jerk reaction to cry appropriation, with regard to the National Gallery of Victoria’s latest projected installation of its Architecture Commission series, in this case, a replica of the Parthenon on the Acropolis in Athens. Mysteriously entitled: “Temple of Boom” by Melbourne based architect and designer Adam Newman and Kelvin Tsang, the official media release explains the structure, “reflects the slow yet unstoppable processes of change that transform all cultural, geological and ecological systems.” In order to reflect this process, the artists propose to encrust a replica of the hallowed icon of western civilisation in various forms of art. “All over the world political buildings like Parliament and capitol buildings appropriated the topology of The Parthenon and over time it [the symbol] you have political power…. As a provocation, what if we take that and “deface” it with art?” Kelvin Tsang muses.

Already around the sections of our community, a hue and cry of indignation has been raised. “What gives these people the right to appropriate [our] building for their own purposes?” some ask. “How does one dare to deface a building whose image and corporeal form is sacrosanct, without defiling it, or that which it symbolises?” others lament. “Is it not enough that Elgin denuded the Parthenon of its Marbles? Why should we allow the cultural descendants of the same imperialists who appropriated our buildings and our civilisation to perpetuate the same acts of imperialism in our age?” many argue. “Shouldn’t we be acknowledged as native peoples and traditional custodians of the sacred site of the Parthenon?” many others inquire. “How can we work out a way to claim a percentage of the royalties?” unconfirmed and most probably apocryphal Greek Consular officials, ponder.

Such questions are indeed valid. The Parthenon in its present form has been perched upon the Sacred Rock, looming over the city of Athens for almost two and a half millenia, ever since Pericles pilfered the common defence funds from the treasury at Delos in order to construct it, the first of many Parthenon-related appropriations. Since times ancient, historians and art critics have waxed lyrical about the perfection of its proportions and the sublimity of its sculptures, holding it out to be one the pinnacles of European human achievement. It is the appreciation of this apex of brilliance that has permitted Westerners to orientalise our tribe in latter days, holding us out to be degraded, degenerate and unworthy descendants of those paragons of perfection that crafted the superlative, even as we are unable to follow suit. Should we view Newman and Tsang’s artwork in this light? As praise and accusation?

The Greek conception of time and ancestry differs somewhat from that of the West. As time is in our tradition, curiously telescoped and past, present and future exist on the same plane simultaneously, the achievements of our ancestors, however remote, are our achievements and confer legitimacy upon us, compelling all of those who admire them, to pay us homage. In this vein we too appropriate the Parthenon, as a chief exosymbol, or logo by which others can relate to us. We employ this symbol further, in the form of souvenir merchandise, liquor products, and in Australia, in a surprising array of business names ranging from those with a substantive connection such as Parthenon Marble and Parthenon Travel, to those whose connection is tenuous to say the least, such as Parthenon Carpets, Parthenon Continental Cakes, Parthenon Fashions and tellingly, Parthenon Funerals. If we can appropriate the edifice’s name in order to run a business registered as Parthenon Pizza Bar or Parthenon Water Management, what precludes Newman and Tsang from interrogating just how potent icons are interpreted? Tsang in particular, is very vocal about his opinion that the Hellenic conglomerate has no exclusive claim to the building, stating: “We’re happy for anyone’s interpretation, because the thing about the Parthenon and architecture in general is that anyone can have their interpretation and it’s not confined to any one culture because it’s so world-renown.”

In pursuing their endeavour, the artists maintain that they are guided by the theme of ‘transformation and constant flux,’ and it is this rather than any issues relating to the appropriation of a world icon, whose origins and history are often overlooked that should draw our attention. This is because the prospect of a Parthenon that can be subjected to the ravages of time within the context of its local environment can be juxtaposed against and considered as a critique of the manner in which the Parthenon is presented, preserved and constructed by its current custodians. As much as many would like to believe that the Parthenon in its present form is exactly that which Newman and Tsang seek to explore: the gradual natural decay of a building within the framework of its surroundings and history, what sits atop the Acropolis is in fact, a carefully curated re-construction so as to propagate a particular narrative, one that obfuscates a millennium of cultural memory and experience.

Nothing within the current form of the building for example, suggests to the modern visitor that for the largest part of its history, the Parthenon was a Christian church, Panagia Atheniotissa, the third most important church in all of Byzantium and the iconography that could still be discerned as late as the 1920s, now has been totally effaced. Nor indeed is one able to understand that the Parthenon was used as a mosque from the end of the fifteenth century write up until 1832, for all traces of the mosque, starting from its minaret, were demolished sometime in the 1840’s. In similar fashion, nothing exists today of the Frankish tower that was constructed during the period in which Athens was part of a Latin duchy ruled by the Acciaioli family, between 1388 to 1458. Constructed from debris sourced around the Acropolis, and used to imprison Greek freedom fighter and renegade Odysseas Androutsos, it was demolished by the Greek authorities in 1874, on the initiative and with funding from archaeologist Heinrich Schliemann, prompting historian of Frankish Greece William Miller to consider this “an act of vandalism unworthy of any people imbued with a sense of the continuity of history” and “pedantic barbarism.”

What we therefore are presented with in the form of the Parthenon in Athens, is a building in which layers of accretion, lived experience, use and misuse have been deliberately peeled back in order to expose only vestiges of the classical past so prized by the West.

Consequently, this is not a natural ruin but a contrived one that bears no relation to the actual history of the building, or those who have had a relationship with it. Instead, it panders to and self-appropriates the orientalising paradigm of those cultural imperialists who propagated the myth of our own unworthiness in the first place, creating a self-perpetuating cycle of colonialism and internalised racism policed by the Greek ruling class and all those who subscribe to their narrative. The fact that the Acropolis itself emerges separate from and completely disconnected to the city of Athens, bearing absolutely no relation to its urban sprawl and architectural development is a testament to the paradoxical nature of the space: in but not of the Athens or the Greece we experience.

It is for this reason that Newman and Tsang’s conception of emphasising transformation and flux is so inspired, for it highlights the manner in which our own tribe attempts to hide it and with it, the multiplicity of narratives, multi-faith and multi-cultural that may not suit our narratives, but which deserve to be heard. Newman and Tsang and their artist collaborators cannot deface or degrade a Parthenon more than a people so self-conscious that they can only accept a sanitised and flawed version of it. If their project facilitates a debate about the manner in which important historical buildings and artefacts are subverted to serve various discourses, then it is one that our community would do well to engage with and support. Finally, given the West’s and by osmosis, our own people’s obsession with purity, racial, cultural or otherwise the glorious irony of being called upon to bear witness to the defilement of a building whose name literally means “House of the Virgin,” should not escape us and should by appreciated by us all, for what it is, a timely form of iconoclasm that, with a resounding boom, permits us to rid ourselves of our prejudices and misconceptions and reconsider our identity and foundation myths, anew.