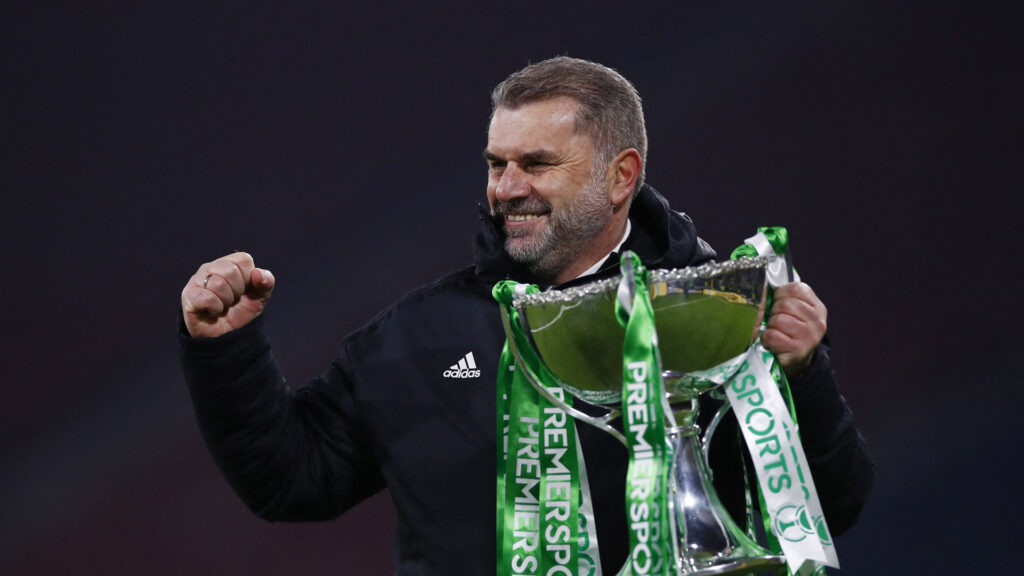 Ange Postecoglou said he’s in no hurry to leave Celtic for the English Premier League, according to reports in the Sydney Morning Herald and The Age. Tim Cahill said the former Socceroos boss’ hefty profile in Europe affords him to wait for the perfect moment to make his next managerial move.

It was rumoured that Postecoglou was lined up to fill a vacancy at Brighton and Hove Albion, which has since been filled by Italian Roberto De Zerbi. Reports coming out of England are firing speculation that the Greek Australian is being watched by Leicester City who are contemplating the future of Brendan Rodgers – Postecoglou’s predecessor at the Scottish champions.

Postecoglou won the double in his first season at Celtic and captivated all with his heroic tactical approach in the UEFA Champions League.

The 57-year-old is creating major excitement in Europe and the UK sparking conjecture about future job opportunities in the Premier League.

Postecoglou avoided adding to the speculation when he spoke to the SMH and The Age during his quick visit back home to promote Celtic’s participation in the Sydney Super Cup later this year. He gave no sign he was looking to shift from Glasgow any time soon.

“I don’t think it’s lost on people that I’m already at a massive football club,” he said.

“We play in front of 60,000, got opportunities to win trophies, we’re in the Champions League – it’s a massive club I’m already at. My ambitions are to bring as much success as I can to this football club, that’s what drives me, that’s exactly where I want to be.

Adopting a philosophical stance, he said he’s resisted “thinking too far ahead or what the next step is.”

“I’m loving where I’m at, I’m at a big football club – everything I’ve wanted to do is at my doorstep now.”

Cahill, who is in the country to take part in the Socceroos’ centenary celebrations, called Postecoglou a “visionary” with ambition to work at a higher level.

Cahill said that Postecoglou will “probably aspire to coach in one of the biggest leagues in the world. But at the same time, he likes to see out projects.”

“That next step will be about making the right decision … you look for longevity, and in football, there’s no guarantee and to reset up and go again, will be difficult, but a challenge that every coach looks to.”

Postecoglou’s visit to Sydney is his first time back in Australia since he joined Japanese club Yokohama F. Marinos after quitting the Socceroos, having sealed qualification for Russia 2018.

He will bring Celtic to Australia in November for friendlies against Sydney FC and Everton. The Scottish Premiership, like all domestic competitions, will break for the upcoming World Cup – and Postecoglou is feeling the love that has developed for him and his methods during what he kidded was a “trial separation” between him and the Australian game.

“It’s been incredible – obviously accelerated in the last 12 months that I’ve been at Celtic. I’ve had a few friends and family come and visit me and try to tell me people are getting up in the middle of the night to watch Celtic play St Mirren or St Johnstone,” he said.

“It’s a good feeling. In my whole career, I’ve tried to get some credibility for myself, not because I’ve needed it but because I’ve always felt that means credibility for the game here in Australia. It’s great to think that we’re getting into that stage where coaches in our game are being seen as the same standard as the other codes.”