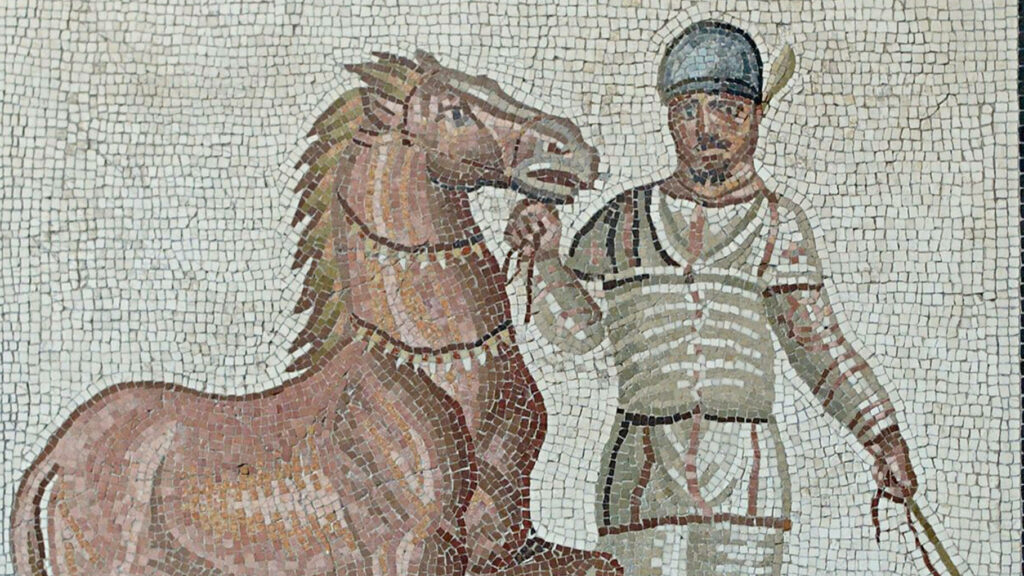 Pavement mosaic with a circus charioteer of the veneta (blue) faction. Roman artwork, first half of the 3rd century CE. Photo: Jastrow/Free usage

«Του Κάπι φτεύουμι τς ντμάτις», my grandmother would always say in response to my question as to why for yet another year she would not attend the extended family’s traditional Cup Day barbeque in Dromana. According to her and almost the rest of her generation, the first Tuesday of Spring was the optimum time for the planting of tomatoes. Any earlier, and they would rot. Any later, and they would dry out too early in the harsh and yet unpredictable Victorian Summer.

Truth be told, I always anticipated Cup Day with trepidation, for where Cup Day was, exams would soon follow. Thus, while hordes of relatives descended upon my uncle and aunt’s home in Dromana uninvited in search of succulent fatty chops and melt-in-the-mouth sausages, I would ensconce myself au solitaire in one of the bedrooms of that august establishment, there to perform the arduous task of memorising and understanding a year’s worth of notes.

I would emerge, pale and listless from my studies, only to grab a plate of meat, wolf it down hungrily and then trudge reluctantly back to my place of confinement, uttering maledictions sotto voce against all carefree denizens of the planet. While lingering around the barbeque, I would hear aged uncles pronounce strange and arcane terms in hushed, reverential tones. There was η κουαντρέλα, η τραηφέκτα and η κουινέλλα. These must have been magical beings indeed, for depending on who evoked them, they could change gender at will, becoming ο κουαντρέλας, ο τραηφέκτας and ο κουινέλλας. These seemed to be minor prosperity deities, for all the aged uncles swore that they had all benefited from their largesse, but always in the past.

Sometimes, if I decided to take an extended break, I would go for a walk with my cousins to the local shopping strip, invariably passing in front of the TAB, whereupon we would engage in the pastime of observing senior Greek Australians smelling of urine, stale beer and cheap aftershave making incoherent comments to each other and female passers by. It was from these distinguished gentlemen that I learned a wonderous thing as to the gender-bending capacity of the Greek language. Accordingly, “race” is the only Greek Australian word that changes gender even as it changes number: το ρέσι (neuter), but οι ρέσες (feminine). Some of punters would, for the sake of consistency, employ the neuter plural (τα ρέσια) but they were generally from the Peloponnese and need not vex us any further.

Returning back to the barbeque replete with tips, prognostications and expertise on the subject of form, we would come across the one θείο, the koumbaro of a blood relative, who would always arrive late wearing a canary yellow cardigan stolen from the set of a nineteen eighties Yiannis Katevas music video, never contribute any foodstuffs and fulminate against the Cup on the grounds that it acted as a tax-break for the idle rich and the exploiters of the proletarians while also being sexist, as there were no female jockeys and cruel towards our equine comrades. That uncle, a mainlander, was evidently a communist, as could be evidenced by the fact that he was a vegetarian and his only contribution to the topic of prospective victors was that the φοράδα from his village was disqualified from the Melbourne Cup because χέστηκε στ᾽ αλώνι, causing my islander uncles to turn to him with raised eyebrows and then turn away in collective incomprehension. Among those who survive, the question of who the hell invited him to the annual barbeques anyway, is a topic of intense disputation, even though such barbeques have now passed into history.

Like Ho Chi Minh, communist uncle was also a nationalist, for one of his most cogent arguments was that Greeks should not concern themselves with the Melbourne Cup because it is a sport created by the same British colonialists that divided Cyprus and prevented the Greek people from achieving their destiny in their proper borders. According to him, horse racing and the futility it represented is alien to the ancient Greek psyche, which apparently was about constant work and self-improvement.

This argument appealed to me so much that the cabal of aged islander uncles determined upon an intervention. Taking me aside and thrusting a chop into my hand and a VB stubby in the other, one of their number pronounced: “Don’t listen to that mainlander. There is nothing more Greek than horse-racing. Look at Diomedes and his man-eating racehorses. And there is nothing sexist about it. In Ancient Greece the prizes and acclaim were given to the owners of the horse, not the horse’s jockey. This is how a woman, the Spartan princess Kyniska, who was the owner of a team of horses, became recorded as the winner of an Olympic horse-race.”

My uncle was of course correct. Far from being the purview of colonial parvenus, mounted horse racing were significant events in the ancient Greek Olympics by 648 BC as well as in the other Panhellenic Games. Some scholars believe that the only reason that women were banned from the Olympic Games is because the far-seeing ancient Greeks knew that they would endure and wanted to stop Rebecca Judd and other socially influential people from coming to prominence in the modern age.

Yet it was in Byzantine time when horse-racing, specifically chariot racing, which in modern Greek-Australian are termed: «τα τρότια,» with all references to Comrade Trotsky and the Fourth International being purely coincidental, truly became a national craze. The main chariot racing teams, the Blues and the Greens slowly involved into significant social players, exerting tremendous influence in government and society in political, military and theological matters.

Unlike the Κάπι, whose only occupational hazard consists of the prospect of becoming impaled upon an upturned stiletto that has become separated from its inebriated owner or becoming the recipient of the gift of unexpected regurgitation by a tired and emotional governor-general, attending the races in Constantinople was replete with danger, races often erupting into gang warfare and street violence, such as the Nika riots of 532 AD during the reign of Justinian, when the two racing factions united and attempted to unseat the emperor, culminating in the destruction of half of the city and the deaths of tens of thousands. 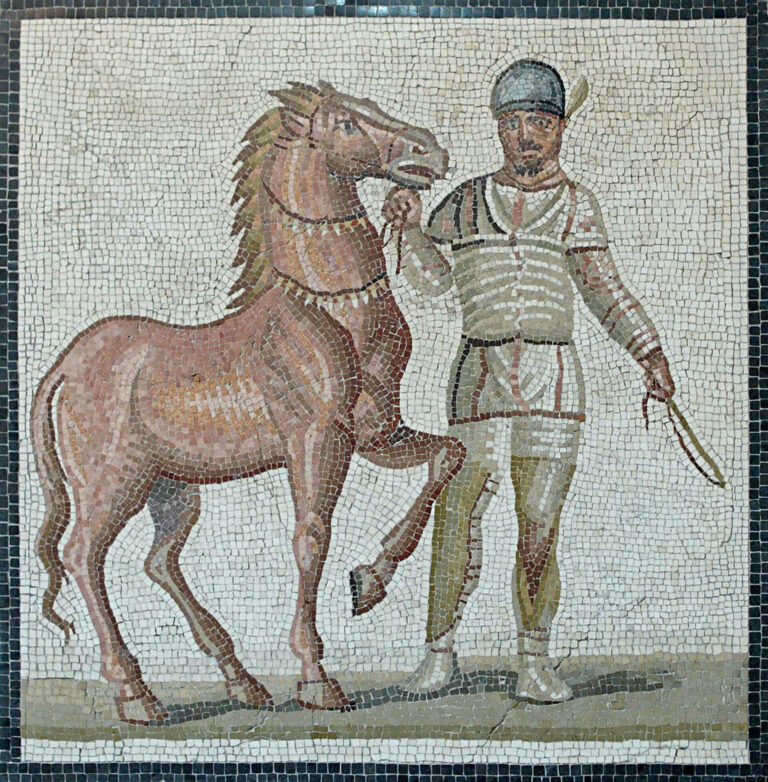 Also, unlike the Melbourne Cup, which is blandly unpolitical, the races of Constantinople were ideal for the Byzantines’ favourite pastime: bringing down tall poppies. In 713, Emperor Philippicus was blinded while in the hippodrome, deposed and sent into exile. In 766, iconoclast Emperor Constantine V ritually humiliated nineteen high-ranking officials in the Hippodrome to the delight of the punters, after discovering a plot against him. He executed the leaders, Constantine Podopagouros, the delightfully soubriqued crab-foot and his brother Strategios, as the crowd went absolutely bananas, indicating just how effectively iconoclasts dealt with cabinet spills.

Historians are not kind to horse-racing afficionado Alexander III who become emperor in 912. They depict him as lazy, lecherous, drunk, and malignant. He is also accused of idolatry, including making pagan sacrifices to the golden statue of a boar in the Hippodrome, during the races, in hope of curing his impotence.

Sometimes, tall poppies combined at the races to cut down other tall poppies. This was the fate of Emperor Andronikos I Komnenos 1185 who was in deposed after his attempts to exterminate the aristocracy of Constantinople. Having been tortured and mutilated for days, he was led to the Hippodrome of Constantinople and hung by his feet between two pillars.

If one considers that Aussies are sports mad, it is worth remembering that the Byzantines located their courts underneath the bleachers of the Hippodrome of Constantinople, for easy access during sporting events, and one would venture to speculate, to allow betting on the outcome of litigation (cue Courtsbet TM litigate responsibly voice-over).

Just like their modern Greek-Australian tight-shirted and even more tight-panted captains of industry and commons, the Byzantines too had their own equivalent of the corporate box for which all vied for access. In the Byzantine case this was the Imperial box and to be admitted to the Empress’ box was a sure signal that one had arrived.

For all their bluff and bluster, for all their talk of το τότι, this being the totalisator, a concept they tried to explain to me every year without success, for all their claimed affinity with «τους μπούκηδες», for all their encyclopaedic knowledge of the backround of all the τζόκηδες, my uncles were, as their wives called them, «μαγκ πάντες» (mug punters), who rarely if ever won enough money to cover their expenses. On the rare occasion they did win, they would present us magnanimously with five-dollar notes and we would fetch them beers, dumfounded by the unexpected windfall and prying that the next year would prove just as lucrative.

It was only when I visited the Athens Hippodrome at Markopoulo years later that I discovered two remarkable things: that τζογαδόρος does not necessarily mean someone who jogs towards the TAB to make a bet and that I cannot enjoy a horse-race unless it is accompanied by the smell of burnt meat, ice cold VB and pastizzis, freshly thawed. It is to those memories and my youthful and rather bizarre capacity to recite all the Melbourne Cup Winners from Van Der Hum in 1976 to Black Night in 1984 that I most ardently cling to, exclaiming in Byzantine Hippodromic fashion NIKA!, each time I view the latest champion, in the news bulletin, a day later.