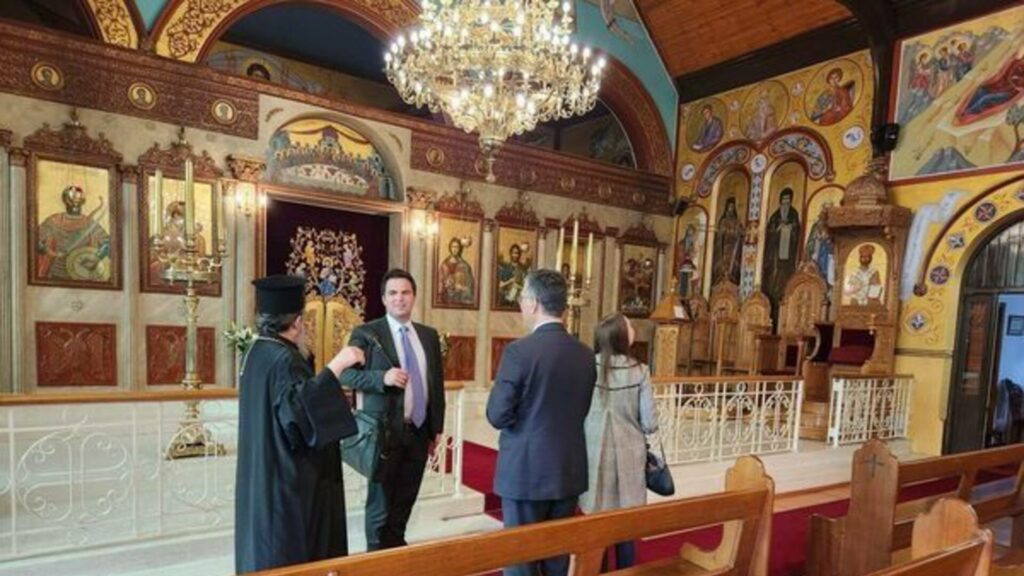 Nck Stavrou seen here at St Eustathios where he announced $100,000 for the upgrade of the parish. Photo: Supplied

At St Eustathios Church on Sunday Nikos Stavrou the candidate for the Southern Metropolitan seat announced through Father Nikolaos at the end of Sunday’s service, the Coalition’s promise to invest $100,000 into the parish if they win the elections. The $100,000 for the North Balwyn Parish will be used to construct a commercial kitchen for its Five Loaves program in support of vulnerable residents of Melbourne.

“I am particularly pleased that this investment will greatly assist with the GOAA Five Loaves Initiative, which has had a huge response by the community, and provides material and spiritual support for all people, regardless of culture, belief or background,” Stavrou told Neos Kosmos.

“What a great pleasure it was to be hosted at the Greek Orthodox Archdiocese and St Eustathios Church this morning [Sunday] by His Grace Bishop Kyriakos of Sozopolis, ” said Nick Stavrou the Liberal Party candidate for Southern Metropolitan.

The North Balwyn, South Melbourne, South Yarra and Prahran Parishes host tens of thousands of people between them, and are all in need of repairs or upgrades to continue serving the community.

– $100,000 for the North Balwyn Parish to undertake repair works and construct an appropriate commercial kitchen so that it can continue its Five Loaves program, which supports vulnerable residents of Melbourne through food and conversation.

– $150,000 for safety upgrades at the South Yarra and Prahran Parishes, including CCTV and lighting upgrades, as well as toilet and tiling upgrades.

– $400,000 for upgrades at the South Melbourne Parish to upgrade the community hall, kitchen and toilet facilities, as well as the development of a masterplan for the Five Loaves Initiative building.