The 40 year game of football that keeps on giving

A group of football loving family members, friends and acquaintances have been meeting for a weekly game of the round ball since 1982 Laughter echoes across the soccer pitch at Chelsworth Park as I make my way there, on a sunny Wednesday afternoon in Spring.

It’s only a week since heavy rains flooded parts of Melbourne, but the green field in Ivanhoe has dried enough to allow for another game of soccer, between a group of Greek Australians who have been playing the game for forty years.

It was back in 1982, when a few Greek boys from Ivanhoe Grammar, and Thornbury High promised each other that they would continue playing soccer even after they graduated and went their separate ways… And true their word, the tradition continues to this day, as Chelsworth United Old Ivanhoe FC is closing in on a thousand games.

Though only five of the originals were there on the day I arrived, the club has grown. More than a hundred players have passed through, amongst them their sons and even their daughters at times, cousins, koumbaroi, and any of their friends with the right attitude who want to have fun, are competitive but in good nature.

“It has been a while since we have seen each other,” Manny Anthoulas, tells me when he takes a break, referring to the jokes and happy energy that is catching on. He is one of the originals, along with Theo Angelopoulos, his cousin and president who instigated this and kept it going every Wednesday for years, during daylight saving.

“Everyone knows that at Chelsworth Park the boys play,” Theo tells us as we watch the game that brings together men in their early 20s all the way up to their 60s.

“And everyone here is connected around me”, he laughs, but sure enough, they are all somehow related or connected through marriage and koumbaria, connections that have only helped the club thrive over the years. “Our younger cousins, they grew into it. Some were only 6-7 years old when we first started playing, and they joined us when they were ready.” 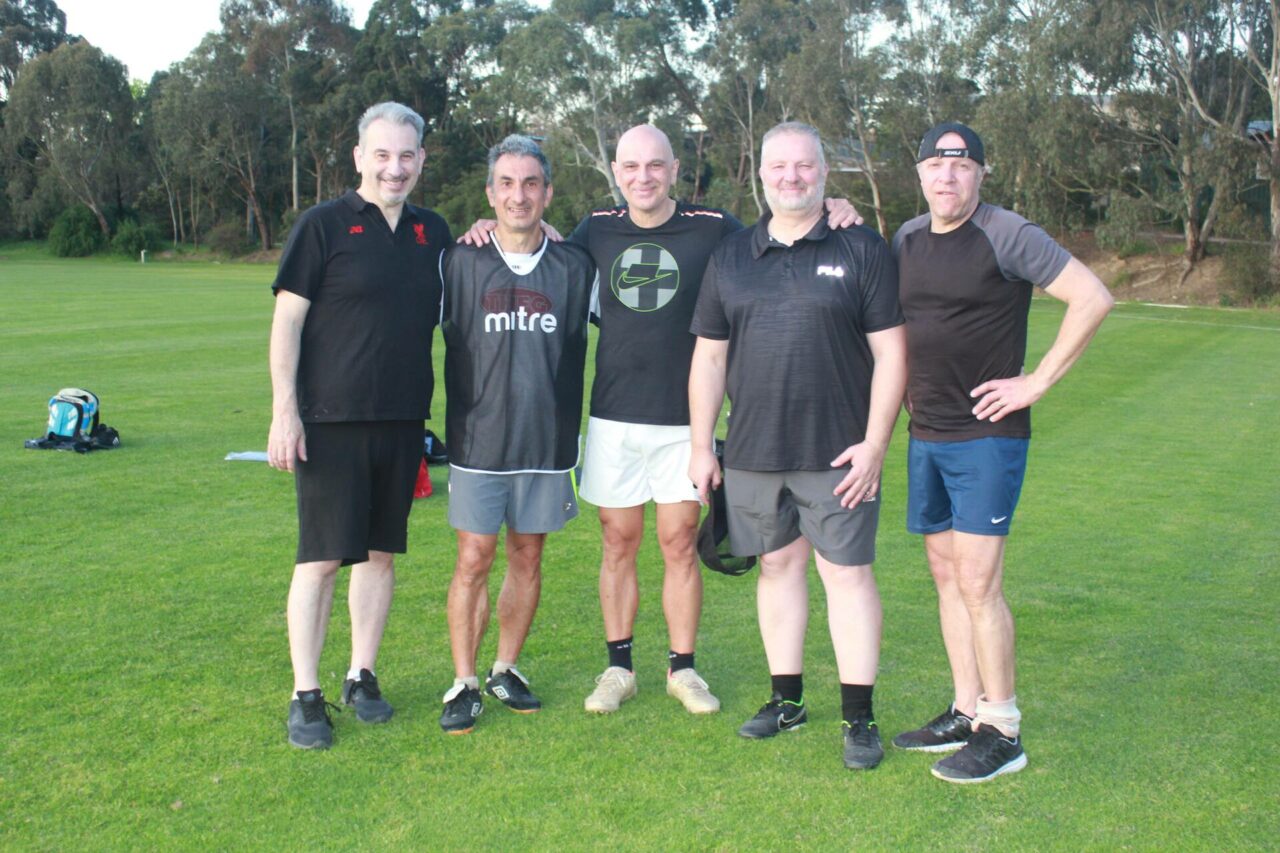 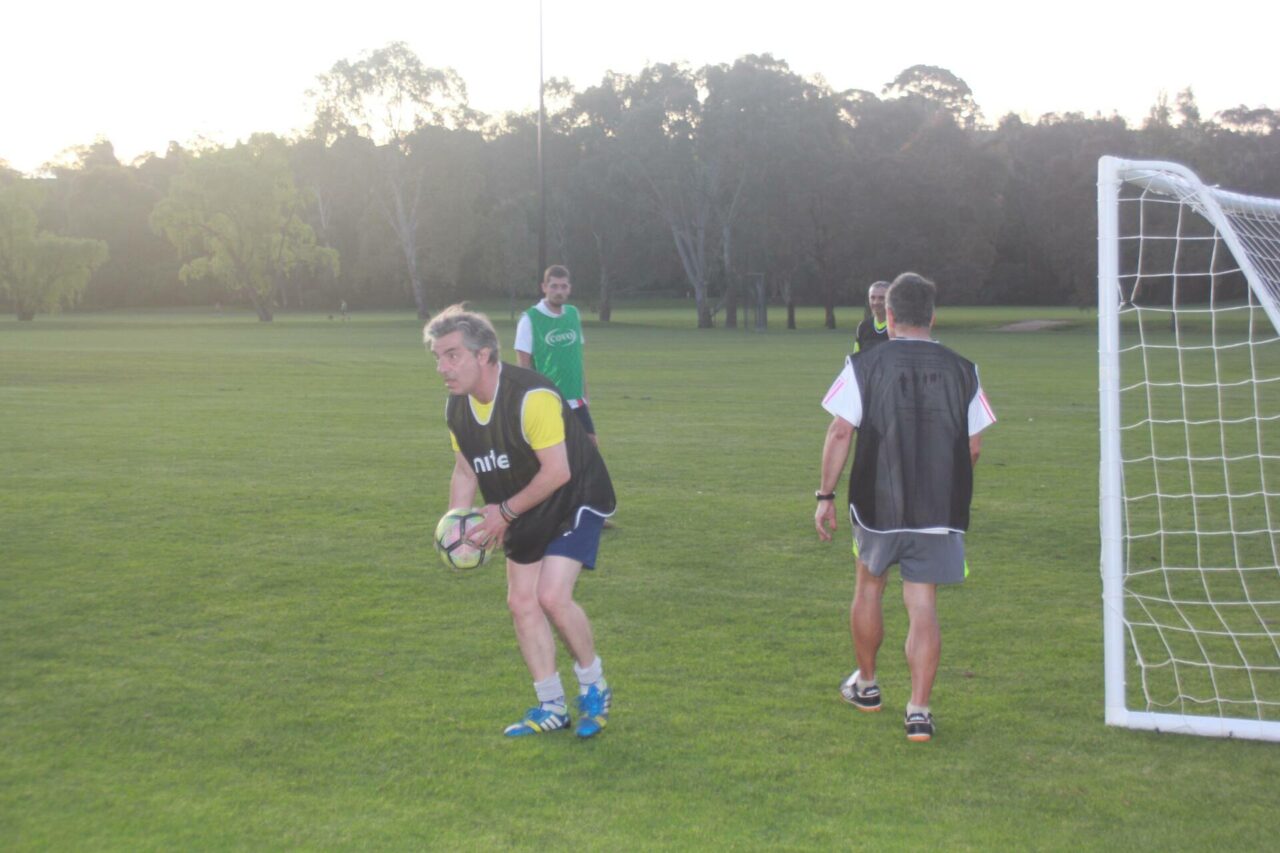 Apparently in the early days, you could not find a more passionate group of players. Apart from Wednesdays they would play on Sundays too, even after a big night out, and they would still rock up. In those days their girlfriends would come along and join in the banter on the sidelines.

“As soon as we married, they disappeared!” Theo laughs, though he describes how their children, when they were young, would all come out with their dads and play their own soccer match alongside them, so it is not surprising that the tradition has caught up with the next generation.

“What brings us back?” Theo echoes my question. “It’s the banter that you would get sitting at a kafeneio, and the familiarity between us. You know that you can have a good laugh, share a joke, discuss anything you want. Nothing is taken too seriously. We have a kick, and you can see we are taking it easy. It’s all about enjoying ourselves… being outdoors.”

“It’s midweek, and it is a break from work, a break away from life,” Manny adds. “So during that short period we play each week, we are essentially reliving our youth.”

True to their word, and when they are not travelling for work, or have other commitments, this group of men will come from every corner of Melbourne to their rendezvous for a game of soccer and a catch-up at the park.

They have all taken different paths from the time they graduated. Some are in IT, others in real estate, in sales, there are doctors, accountants, bankers, you name it. And despite it being peak hour, they will travel to Ivanhoe, from Essendon, Mount Waverly, Moonee Ponds, Bulleen. “It takes a certain amount of commitment!” Manny adds.

And some, even injured will still show up, like Thanassis, who is watching from the sidelines and commenting on the game.

Twenty or so will gather each Wednesday, and the goals will be pushed back to allow for everyone to have a kick.

The sun sets and they slowly wrap up, their light banter drifting into a content silence of shared memories of a game that keeps on giving, season after season, year after year.