Men Without Women: The polis (Η πόλη) that was feminine only in etymology

Round tables (throughout Greece) are dominated by men, with women noticeably absent from an equal and diverse dialogue 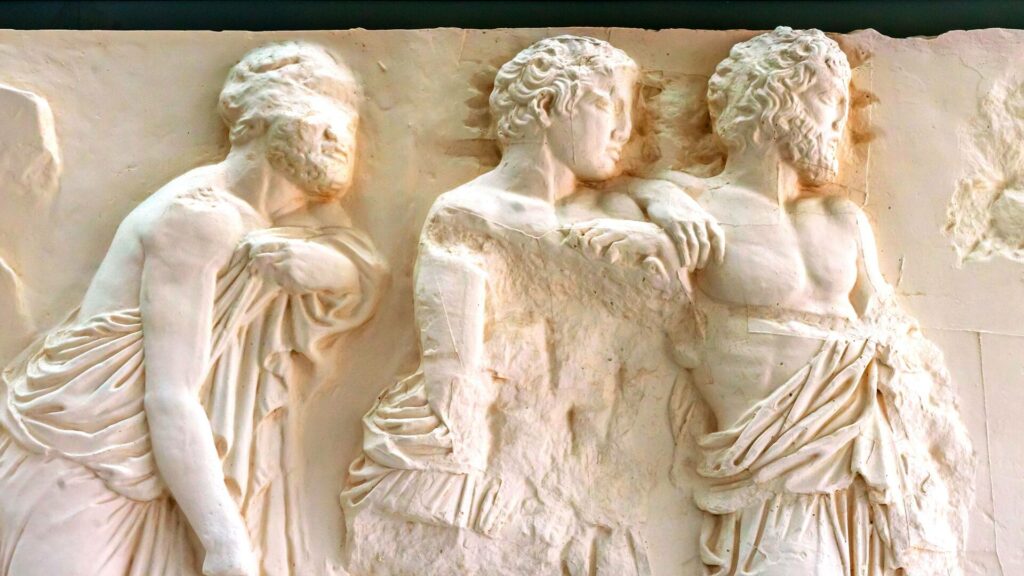 Three Athenian men as depicted on Marble on a Panel of the Parthenon in Acropolis, now exhibited at the Acropolis Museum, Greece. Photo: Depositphotos

At this year’s annual regular conference of the Central Union of Municipalities of Greece (KEDE) which took place on 21-23 November 2022 in Volos, the program of presentations held a surprise: the largest number of participants were men (57 names in total) and just two women, not self-governing, completed the list of official conference speakers. This is one of the most typical examples of what we call today manels (men + panels), i.e. round tables (throughout Greece) that are dominated by men, with women noticeably absent from an equal and diverse dialogue which in fact, in this particular case, concerned the future of our local communities.

Despite the need for inclusion, diversity of thinking, pluralism in the formulation of opinions and the effort to avoid gender discrimination in a country that scored again this year the last position in the Equality Index in the EU , and the 110th place in the world , the organizing committees of such important conferences on the economic and social development of Greece found no issue in setting an agenda with a strong male representation, ignoring women as a gender, but also the viewpoints of the elected women who live and work in the local Municipalities, as such disregarding the practices that are unfolding in the world.

Is it possible to design an inclusive program of presenters? Our country Greece has politicians, scientists, researchers and creative minds with a remarkable track record in leading change. What prevents us from doing so, what prevents us from inviting them and listening to what they have to say: the familiar practice of putting forward programs with the same panelists, our inability to realize that the call for inclusion is not just “feminist whining” but pursuing practices that show that equal participation and co-creation have a positive developmental impact on the GDP of a country and socioeconomic progress, according to official OECD and IMF studies . Otherwise the point of the National Action Plans 2021 – 2025 already in place for Equality in regional and local self-government is lost, if these pledges only remain in print, thus acting as a distortion that works against social and economic progress.

If we accept the messages from official reports that Gender Equality in Greece remains under threat, then we will need to take responsibility for the fact that the threat comes from our own blindness and indecisiveness as to how we practice gender equality in our everyday lives. According to the European Institute for Gender Equality, in the countries that currently rank high in gender equality participation in their national parliaments and democratic institutions, the increase of women at all levels has been steady since 1997. Countries on the African continent saw a 40 per cent increase in female participation, Latin America at 30 per cent while Australia increased its rates from 15.5 per cent in 1997 to 39 per cent in 2022. We see clearly that the effort worldwide is ongoing, systematic and targeted, and the Greek Diaspora can impact on a turnaround in their homeland.

In Greece, we have all the policy tools to implement equality in practice and we are in fact one of the countries that are ranked high for the presence of such tools. It is the implementation that mostly matters coupled with the understanding that an open society can only gain from joint participation .

* Despina Limniotaki is a Social Psychologist & Steve Bakalis is an Economist.