Diatribe: Trevor in time of mourning

Dean Kalimniou revisits meeting Constantine, the late, deposed king of Greece and reflects on his friend’s reaction to his passing 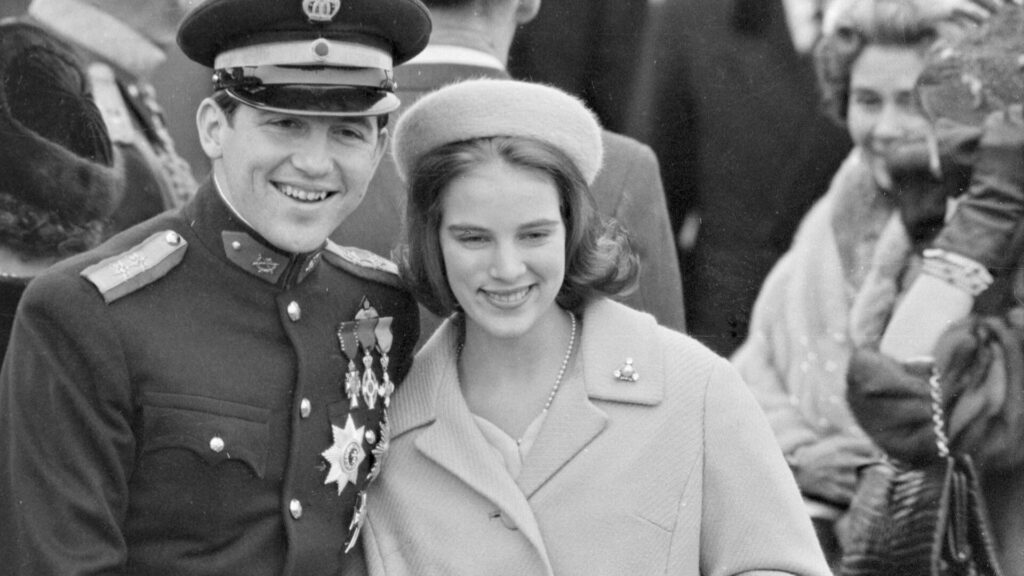 Constantine, the former and last king of Greece, has died at a private hospital in Athens at age 82. Here seen with Crown Princess Anne-Marie in Athens, January 1963. Photo: AAP via AP/Erik Petersen/Ritzau Scanpix

My good friend Trevor (which is short for Aristogeiton) is in mourning. The object of his most ardent affection and veneration is dead. Constantine, the deposed king of Greece has shuffled off this mortal coil and with him, Trevor’s dreams that through dethroned majesty, the throne of Constantinople would be regained.

“All the prophecies speak of him,” he revealed to me a while ago, as we sipped frappe furtively in his bedroom, in his parent’s house and he pointed to the 2010 calendar of the Greek Monarchist’s League of Australia, hanging on his wall. “A Constantine founded the City, A Constantine lost it and a Constantine will take it back. He is the hexadaktylos, the six-fingered king who will retake the city.”

Unlike Trevor, I met the deposed Constantine years ago and counted five fingers on each of his hands, all present and as correct as in any other member of the species but Trevor would have none of it. When I also attempted to explain to him that it was not just a Constantine that lost Constantinople, but also an Alexios in 1204 and a Michael who regained it in 1261, he would have none of it. “The deposition of God’s anointed leader of the Greek people is not just a tragedy,” he intoned. “It is a sin. And as long as the shadow of this sin hangs over the Greek people, their country will be blighted.”

Since he had gone biblical this early in the conversation, I related to him the Prophet Samuel’s objection to the institution of the monarch as contained in the Old Testament, namely that in adopting a king, the people would be rejecting God as their unseen ruler, their sons would be recruited forcefully into the army, there would be forced labour, the people would be enslaved, the king would grab their land/property/maid/servant (in that order), there would be over-taxation and hereditary kingship would lead to oppression. Quoting Samuel, I reached a dramatic crescendo: “When that day comes, you will cry out for relief from the king you have chosen, but the Lord will not answer you in that day.”

Trevor’s father, a proud Spartan entered the room carrying crackers dripping with low fat hummus. Glancing at the calendar, he remarked angrily: “Take that bloody thing down. What the hell is wrong with you, boy?” While Trevor prides himself on his Laconian heritage and cites it as one of the reasons for his love of Constantine, for according to him in order to be a true Spartan, one must be a royalist and of course prior to becoming king, Constantine was Duke of Sparta, his father, who still laments the fall of PASOK, is decidedly against monarchs, their works, their pomps, their service, their inventions, and all things that belong to them. The reason for this is that being possessed of a lofty elevation, in his youth, he served a stint in the Royal Guard.

“I got to see them up close,” he confided. “Living in the lap of luxury, completely oblivious to everything around them. What got me was their waste. We would be present at functions where there would be so much food piled on the tables, delicacies we had never even heard of and they and their guests would barely touch them. And afterwards, we would see these uneaten luxuries thrown away in the bin. They knew, or should have known, that most of us were from villages, from poor families that were familiar with hunger. They did not once ask us whether we were hungry, or whether we knew someone who could use some extra food. Instead they discarded everything. This was a tremendous shock to me. That is why I voted against the return of Constantine in the referendum…”

“The referendum was fixed!” Trevor interrupted his father, shouting in a voice beyond shrill. “It was fake! The people…”

“Which referendum?” I asked, hoping to channel Dr Ben Sobel in ‘Analyze This.’ “The first or the second? How can you bring up the first referendum if we’re not gonna talk about the second referendum?” This is because along with being an ardent monarchist, Trevor is also paradoxically a fervent supporter of the Colonels of Junta fame, who assumed power in a coup and deposed Constantine formally in 1973.

“I’m not sure how you can reconcile your two loves,” I pondered. “After all, was it not the Dictator Papadopoulos who condemned Constantine in 1973 as “a collaborator with foreign forces and with murderers,” accusing him of “pursuing ambitions to become a political leader?”

Trevor considered this for a moment before adopting a sage expression, such as that assumed by Buddhist monks when addressing imbeciles: “Both the King and Papadopoulos wanted the same thing,” he declared. “Order, Stability and Progress. Otherwise the leftists would have taken over the country and destroyed it, like they did later. It speaks volumes that both the King and Colonels planned coups. It is just a shame that they didn’t co-ordinate with each other.”

Trevor’s father scooped up the last of the hummus in his calloused hands and snorted derisively. He has despised the Colonels ever since they gave his claustrophobic cousin the right to run the village periptero in the early days of the coup, precipitating his own emigration to Australia. “These people are not Greek. If we are to stuff up our country, then at least let other Greeks do it, not foreigners. That is why I have supported PASOK for so many years,” he explained proudly.

On hearing the suggestion that Constantine was not Greek, Trevor launched into a lengthy exposition as to the genealogy of his family, attempting to elucidate his Byzantine roots, which according to him, justify his rule over the motherland. “At any rate,” he pleaded. “His family had been resident in Greek for over one hundred years. People get naturalised in less than ten. It is his family whose members doubled the size of Greece. How can you claim that he is not Greek?”

This is an argument that does not find me unsympathetic. After all, we get awfully sensitive when we are considered by the mainstream to be Greeks, rather than Australians and we haven’t even doubled the size of Oakleigh. “I’ll tell you what the clincher is for me,” I responded. “When he was in London, at the time of the Second Referendum, he promised that if the Greek people voted to restore him, he would make sure his mother would stay away from the country. Now this is a two-edged sword as far as his provenance goes. No true Greek male would publicly acknowledge the intrusiveness of his mother, let alone throw her under a bus, by even considering the prospect of barring her entry to his abode. I’m with your father on this one. If I lived in the motherland, I’d rather support a native dynasty I can elect and remove every few years, such as the Papandreoi and the Mitsotakides, rather than one I’m stuck with in perpetuity.”

Trevor considered this for a moment before commenting that Constantine was a far superior choice as a role model as he was not only connected to the other European royal families, granting him an aura of respectability that Varoufakis could never hope to achieve, with or without leather jacket, but was also an Olympian, while the Greek politicians were all paunchy and unfit, ignoring Maria Sakkari’s attempts to marry into the ruling family. When I told him that Constantine, while skilled as a sailsman, was only one member of the sailing team that won the 1960 gold medal in Rome, he refused to believe it, referencing instead, the poor legacy of those who inherited his power, if not his mantle.

“Look at Greece now. Fraying at the seams. Social and economic chaos. No cohesion. Immorality and corruption everywhere. Hundreds of thousands fleeing the country. Only the return of the king can unite all the Greeks and give us all a sense of purpose again.” I gently reminded him that it was during his beloved monarch’s rule that hundreds of thousands of Greeks abandoned their homes in search of opportunities elsewhere, possibly the largest mass migration in our modern history and it was unclear how the return of a former monarch, who repeatedly expressed his view since his deposition that it is for the people to decide how they are governed, would in any way suture the fissures within the Greek polity. “Spoken like a true Commie,” he snarled. To my subsequent rumination as to why Constantine’s soubriquet, Κοκό, is a euphemism for copulation in vernacular Greek, he had nothing to say, me fleeing, valuing my bodily integrity.

Constantine is dead, and Trevor is in mourning. A piece of black tulle hangs over the Christmas card on his desk the office of Constantine sent him in 2004. In his grief, he rails at the ingratitude of the modern Greeks who refuse to grant the dead former monarch a state funeral. Most of all, he laments the downfall of an entire institution that collapsed before he was born and the sorry fate of investment consultant and activist hedge fund founder Paul, born a Crown Prince but destined now never to be God’s Anointed. “There is no hope for Greece now,” he laments when I call to convey my condolences. “None whatsoever. There is no one legitimate left to rule.”

“Yes there is,” comes his father’s voice, faintly but exuberantly from the depths of the telephone speaker. “The planetarch himself, Tasos Bougas. Who needs a king when you control an entire planet? And he has just the song to summarise the career of the Glucksburgs: “Μέσα, Έξω – In Out!”

The king is dead. Long the King.