How many times have you craved gyros but ended up shelving the desire due to how long it takes to cook it and how hard it is to find a good gyros place in nearby? If only there was a way to get one as quick as it is to get some takeaway fast food like McDonalds or KFC.

It is that problem that Nicholas Mitrossilis’ The Yiros Shop, has managed to solve in a very unique way, elevating his eatery to the most popular Greek spot in Brisbane and the Gold Coast region. Mitrossilis started The Yiros Shop in 2015 with one location to now owning 12.

The Greek Cypriot restauranteur grew up in a typical Greek Australian way, always over at his grandparents’, having family dinners and Greek food. He eventually moved from Sydney to Brisbane, but found a lack of quality gyros.

Using knowledge he gained through his family’s fish and chip shops, he ventured to create his own fast food experience of his favourite Greek staple, adhering to his family values, a more relatable service and attention to quality and authenticity.

Like all the other big name fast food joints, The Yiros Shop has an app, with a loyalty program and ordering online so you can skip the queue. A third of the 12 current locations offer drive-thru service, meaning this is the quickest way to get Greek food, and without even needing to leave your car. The Yiros Shop also offers catering and events hosting. A taste of the menu. Photo: Maddie Mitrossilis/Supplied 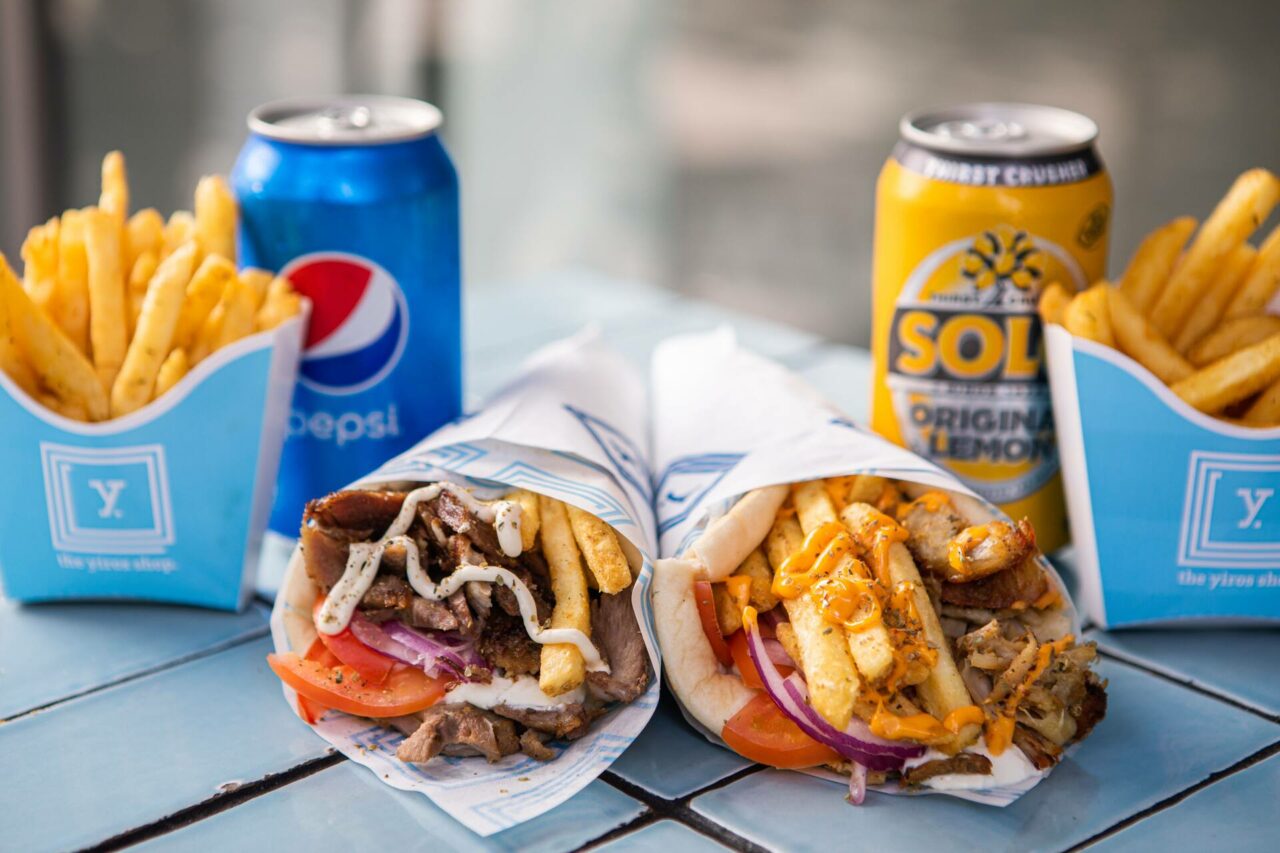 The family aspect has remained. His wife is the general manager, running the operational side while his father has been along the ride from the start, and “loves being in the stores and meeting the customers”.

“Our business is a fast food business, we don’t try to be anything else, we just offer gyros, we’ve got some sides, snack boxes, a couple of salads, but everything is designed for speed. And we have just tried to keep our quality the same from day one. It’s been our main focus, I suppose. Making sure that the food is all high quality and as close as you can get to having gyros in Greece,” Mitrossilis told Neos Kosmos, stressing that fast food is just that, food served fast. Fast does not stand for compromising quality.

“We serve the exact same quality as what we would in an in-line store, as we do in a drive thru location. But our aim is to have it out as fast as you can,” he said.

“The way that we designed our kitchens, and our IT, is to make sure that we can keep the same quality as what you would get in a quick service restaurant but you have it in a fast food format, where we are just quick. So there’s no difference in quality at all.” 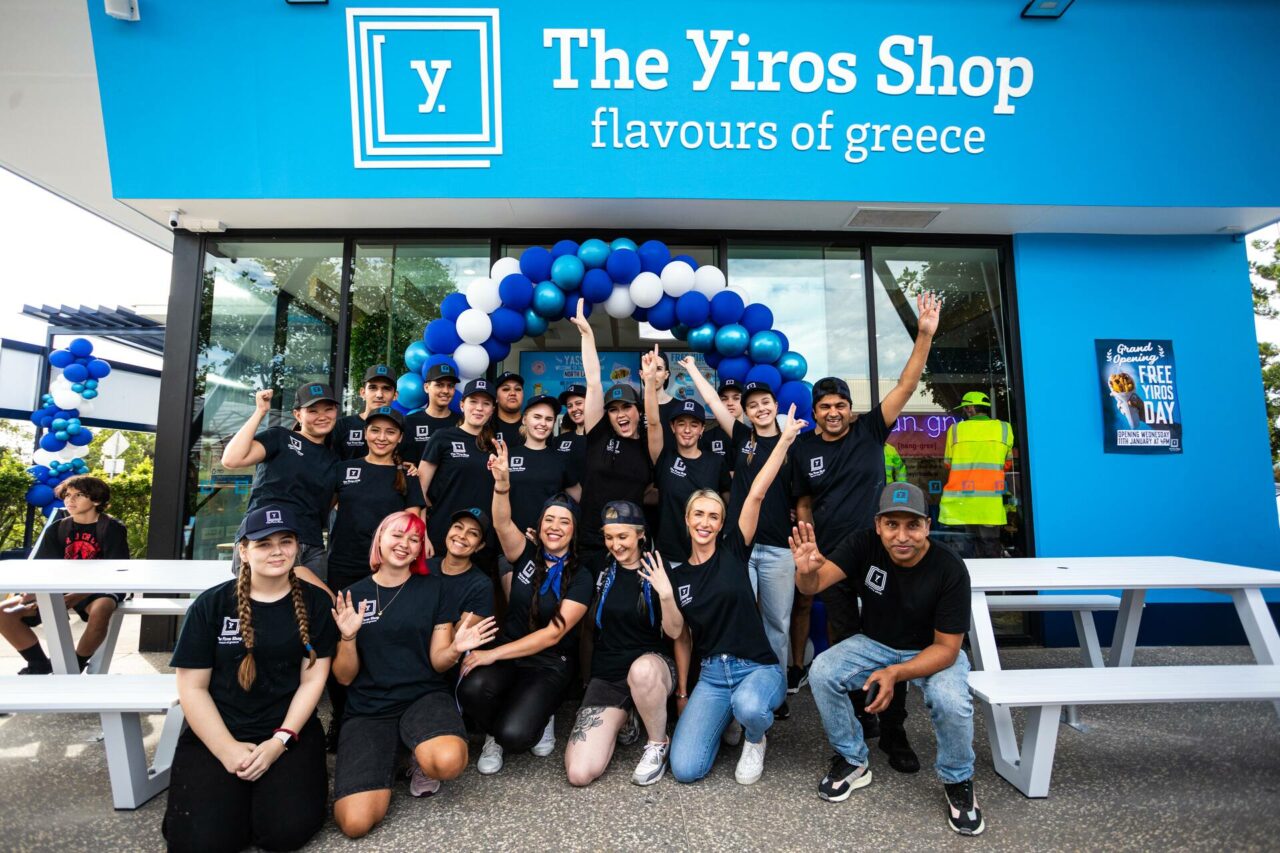 Mitrossilis with his staff in the kitchen. Photo: Maddie Mitrossilis/Supplied

At the end of the day, everyone just wants consistent good food from a regular spot, and The Yiros Shop goes a long way to ensure that’s the case by having its own production factory to supply its goods. Prior to this they had 15 different suppliers, now they have five.

“We’ve just opened up our own production factory where we are making our own tzatziki, we make our own veggie patties and meat patties and we do our own distribution for a lot of our other products just to make the speed and the service to our stores better than what it was (before),” Mitrossilis said.

“It’s just helped a lot with the back end and helps a lot with the day to day operation of the manager as well for ordering purposes – plus, we can also make sure that our product and our quality is always kept at a high standard.

“And it also helps us with our IP too, so people don’t open another gyros shop and go and buy all the stuff that the Yiros Shop has off the shelf. Like a lot of our stuff is bespoke.”

According to Mitrossilis, whatever you eat from The Yiros Shop it’s generally unique to them, you won’t find that exact tzatziki or meat elsewhere.

It is worth noting that Mitrossilis and The Yiros Shop was the winner of the Hospitality & Tourism category of the 2022 Brisbane Young Entrepreneur Awards, having been nominated three years running.

When asked if there’s any plans to expand nationwide, with Melbourne having a strong Greek population, the young entrepreneur says they’re focussed on Southeast Queensland for now.

“We’re just growing. We got five locations locked in for the first six months of 2023. So yeah, it’s our biggest growth that we’ve had yet. And we’re just looking to keep growing at a healthy rate and eventually we’ll look at being interstate or we will be going straight overseas. So we’re just not sure yet, we’ll see what happens.”