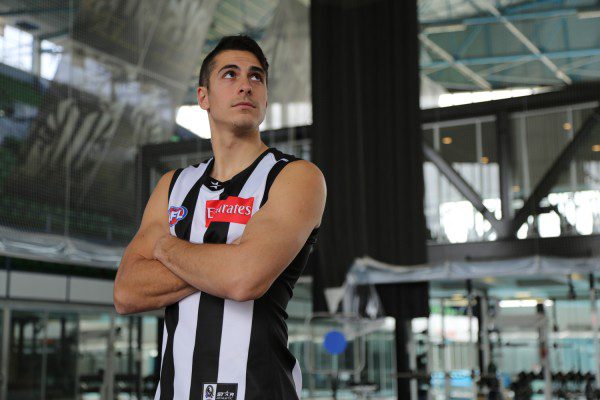 New Collingwood recruit Patrick Karnezis has been given a lifeline by Collingwood, taking him out of obscurity at the Brisbane Lions and returning him back home to his excited Collingwood mad family.

He talks to Neos Kosmos on his goals during pre-season and his first year in the black and white jersey he’s coveted for so long.

It’s only my second day, but even before when I had a few meetings with them, the culture seems really good, really driven.
It’s exciting times for the club as well, there were about 8 to 10 debutants, it’s exciting for the team.

Collingwood is one of the most popular clubs in the AFL, do you find it a bit daunting that people will be looking over your moves with a fine tooth comb?

Yeah, some could say it is a bit challenging, with all the external pressures of being one of the biggest clubs. I used to go for Collingwood, so for me it’s a dream come true. These are things you’ve got to take with you and just handle, I guess.
Up in Brisbane, football isn’t as big there, so that’s a different thing in itself.

What’s your goal for your first year in Collingwood?

For me it’s just settling in, getting to know all the players and staff, I’ve just got to settle some groin issues and get that right and once that’s out of the way I just want to put my best foot forward and give myself every opportunity to play and hopefully succeed at this club and have a bright future.

There has been a lot said about your time in Brisbane, how would you summarise it yourself? What was your view?

I’d probably sum it up in one word: challenging. On and off the field, we both had different aspects in terms of how we’d deal with it. It was challenging but I try and look at things on the positive side and try and take the experiences from there, back here, back home.
Unfortunately I was playing a bit in the reserves, more than the seniors. Again, that was something I was trying to chip away at, keep trying to put my best foot forward, even through you’re not getting selected to play, in the end that helped me to get over the line in terms of coming back home.
I grew up in terms of when I moved there. Things didn’t work out on field and its why we play football but that’s something I’ve learnt and hopefully it’s something I can transfer down back at home.

How did growing up in a Greek household affect your AFL dreams?

Being a Greek boy with a Greek family, my dad loved his AFL, I had a footy in my hands when I was young through junior football.
As a young kid I dreamed of playing for Collingwood. As I got a bit older I got a bit more serious and luckily I got the trials.
As a Greek boy living in Northcote, I just kept playing football. When I got older, Mum wouldn’t have a clue about football, but she said whatever makes me happy.

Anything you’re a bit apprehensive about the new club?

I’m just a bit mindful of how it’s going to go. Being in the system for three or four years, it has kinda helped me with how clubs work and the attitude you’ve got to have in terms of succeeding. It didn’t work out in Brisbane on field, I’m pretty wary of how I’m going to approach it and just give it everything I’ve got for the second opportunity.

Anyone you particularly admire in the sport?

When I was young I was a Nathan Buckley fan, I was pretty heavily into Nathan Buckley, I’d wear the number 5 all over my jacket. There are guys in Brisbane I admire in terms of their performance, attitude and preparations.

Are you keen to continue your multicultural work?

I took part in the multicultural program up in Brisbane, obviously AFL’s not big up there so it was a bit difficult to try and get something going, but I was labelled as the Multicultural Ambassador in Brisbane.
Being in Melbourne now, there are rather large cultural programs that I want to participate in.