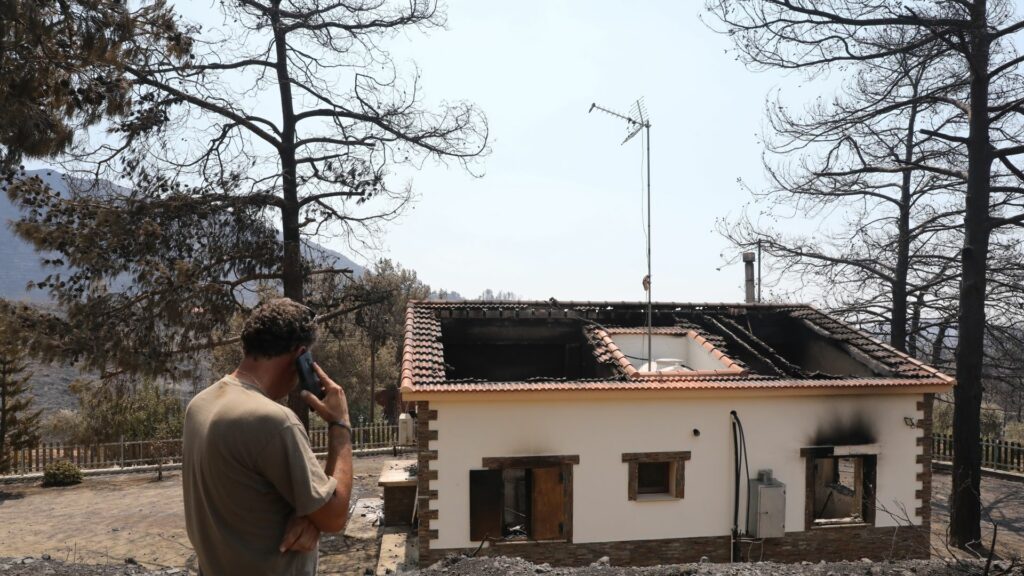 A man of Ora village looks towards his home completely burned by the wildfire in Larnaca mountain region, Cyprus, 4 July 2021. Photo: AAP via EPA/Katia Christodoulou

Cyprus is being plagued by devastating fires.

The blaze which broke out on Saturday afternoon outside the village of Arakapas, a village of Limassol, has spread quickly as heavy winds forced the evacuation of at least eight mountain villages.

Cyprus Police have arrested a 67-year-old man on arson charges and he is being remanded in custody for eight days to assist in the investigation into the cause of the fire which by Sunday, had been raging in the mountainous area of Cyprus for almost 24 hours.

Cypriot President Nicos Anastasiades said the blaze, an “unprecedented tragedy”, “was the biggest tragedy to hit Cyprus” since 1974.

His sentiments were echoed by Cypriot Interior Minister Nicos Nouris, who said, “We are experiencing the most destructive fire since the founding of the Cyprus republic.”

He added that 50 homes had been destroyed so far in the fast-burning blaze, devouring everything in its path while fanned by strong winds.

Eight mountain villages had to be evacuated from the 10 which were affected since the start of the fire, which moved through an area of 55 square km of pine forest and orchards within two hours.

Four charred bodies were discovered just outside the village of Odou on the southern edge of the Troodos Mountain range.

The victims were four Egyptian nationals aged from 22 to 29, working as agricultural labourers at a greenhouse that grew tomatoes near the village where their remains were found.

Odou Community Chief Menelaos Philippou told state-run Cyprus News agency that the four Egyptians took a mountain road when they tried to flee, but their small truck veered off the road and crashed down an embankment. They then fled on foot but didn’t make it.

Forests Department Director Charalambos Alexandrou said the fire was the worst ever in Cyprus, however added that the blaze had been brought under control following the all-night efforts by hundreds of firefighters operatig non-stop since early morning.

Efforts are currently focused on preventing the blaze from crossing over into the thick pine forest of Machairas.