From Myrina to Melbourne: How NUGAS reunited generations 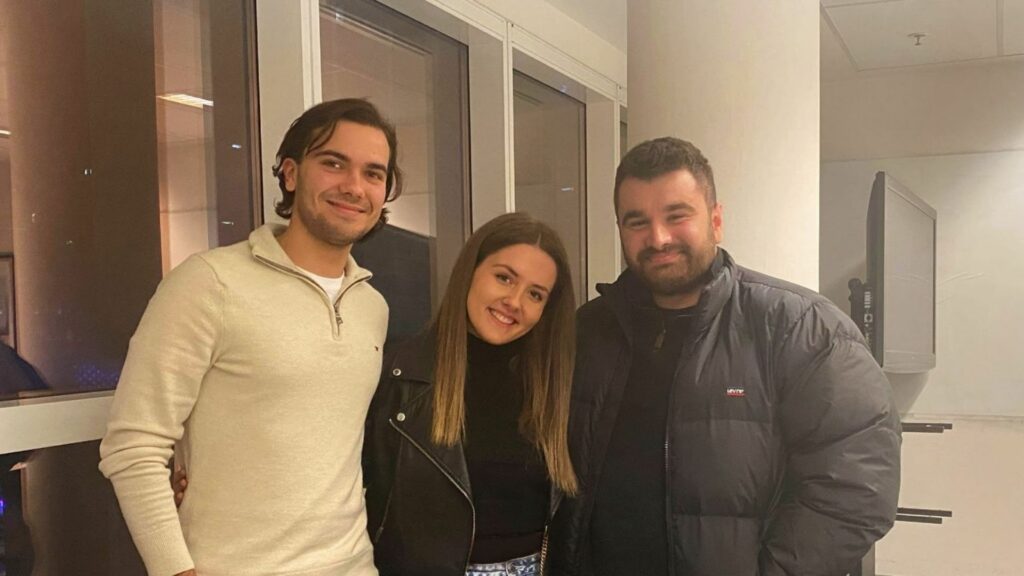 The National Union of Greek Australian Students (NUGAS) has undergone many changes over its 51 years of operation, however one thing remains the same; it’s ability to bring Greeks from all walks of life together.

In the case of William Dasopatis, Marissa Robotis and Billy Battista, NUGAS unveiled a connection deeper than what they had expected.

Through ice-breakers and introductory conversations in the inaugural NUGAS meeting, the trio discovered they have a shared heritage from the island of Lemnos.

Ms Robotis’ grandparents on her father’s side first migrated from Lemnos to Australia 60 years ago on the Greek ship ‘Patris’, with the aim of establishing an imperishable and incredible life for generations to follow.

“Once they arrived in Melbourne, they resided in different suburbs throughout Victoria, including Port Melbourne, Richmond, and Ballarat. They began working in factories to obtain a source of income, whilst adjusting to this unfamiliar, yet progressive environment,” she explained.

Mr Battista’s grandmother, Vasiliki, was the first to arrive in Australia in 1964, before his grandfather Vasilios touched down in 1965. At the time, they were both under the age of 18 years.

“Having few contacts in Melbourne, they both found low-paying jobs with pappou being a furnace worker in the Carlton and United Breweries and yiayia becoming a machine worker. Through mutual friends and a shared bond for their Lemnian homeland, my grandparents were soon married and established in Melbourne’s Elsternwick,” Mr Battista said.

At one point or another, the three university students found themselves going to NUGAS events before joining the committee.

“My first year as a business student at RMIT University has been quite challenging, with online classes impacting the typical university experience. I struggled to make a genuine connection to my studies as I had never properly met my peers or my teachers. I wanted to meet people and to build friendships as a first-year student and as a third-generation Greek-Australian,” Ms Robotis said.

Mr Battista joined the Melbourne University Greek Association team towards the end of his studies, before taking up a role with NUGAS, after finding himself struggling to make new connections with peers.

“At the dinner table, my parents would often reminisce about their university days and the friendships they made and maintain to this day…A few months into the roles, I have met incredible people and made lasting friendships in both committees,” he said.

During his tertiary years of study, Mr Dasopatis took it upon himself to strengthen his connection with his Greek heritage.

His time at NUGAS has seen him organising major events and working alongside a team of like-minded Greek Australian students, in the ultimate pursuit of preserving and promoting Hellenic culture amongst the younger generations.

While all three had their own reasons for joining, perhaps it was fate that brought them together.

One of their more memorable encounters was discovering that they all shared Lemnian backgrounds, having grandparents that were born and raised on the island of Lemnos.

Growing up, all three families were social and associated with each other. Their villages were close by, and given the island wasn’t overly populated, they would often catch up together and see each other at events and social occasions.

“Later we came to discover that Marissa’s grandparents knew William’s grandfather and his sister, and were very close friends when they first immigrated to Australia, as well as having overlapping mutual friends who were incidentally also from the island. After moving to Australia, Marissa’s and Billy’s pappoudes became best friends and her pappou was later the best man at his wedding. Her grandparents also baptised Billy’s mother and aunt, meaning that Billy’s mother and Marissa’s father are godsiblings,” the trio explained.

Now the young Greek-Australians pave their own relationships, continuing the bond that started two generations back.

“If it wasn’t for NUGAS, we probably wouldn’t have met each other. Now, we have a story to pass onto our future generations,” they said.