Konstantinos Vlasis, the man responsible for the diaspora, celebrates his birthday with Greek Australians and says, “We want you back” 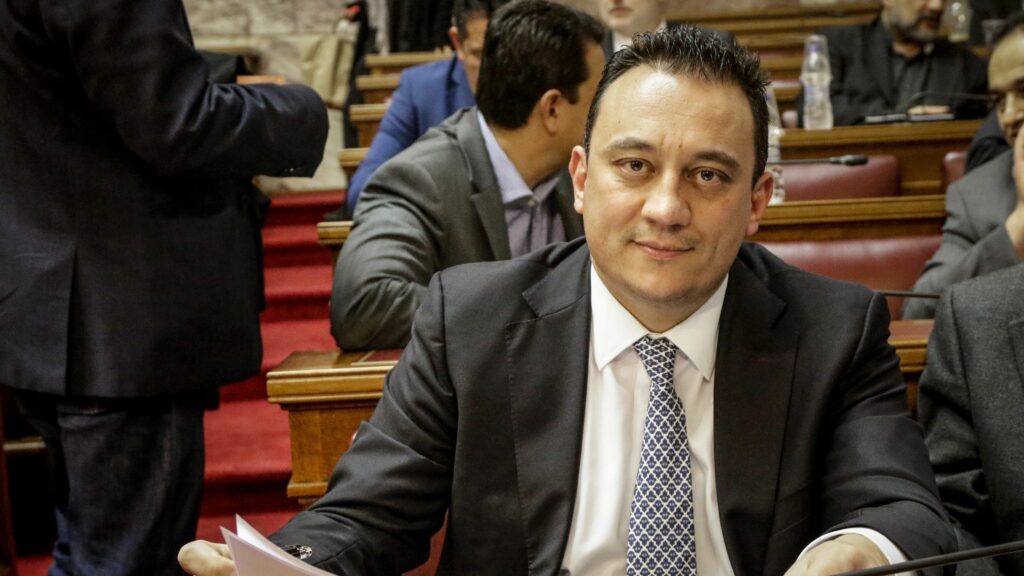 Dr Konstandinos Vlasis turned 46 on Wednesday. He ‘celebrated’ with a virtual meeting with members of the Greek Australian diaspora. Photo: Eurokinissi/Stelios Misinas

“Australia was among the first countries I wanted to visit the moment I assumed the portfolio,” Greece’s Deputy Minister Konstantinos Vlassis told members of the Greek diaspora during a video call facilitated by Paul Nicolaou, of the Business Leaders Council of the Australian Chamber of Commerce and Industry, and Greek Consul General Christos Karras in Sydney.

Attended digitally by more than 100 people from around Australia, the representative for Greeks living abroad, said he couldn’t imagine a better birthday present on the day of his 46th birthday on Wednesday, 7 July.

The real “gift” of course was to the diaspora, offering them a chance to ask questions (though these were vetted and approved by his department beforehand), and in a very regulated meeting, he outlined his three priorities: 1) to maintain the language and culture; 2) to digitise services; and 3) to strengthen bonds between Greeks abroad and Greece.

“We want you to feel closer to the motherland, be politically aware and have a say in the national elections,” he said, stating however that his government’s “ambition” in 2019 was to “enable Greeks abroad to (exercise their constitutional right to) vote from their place of residence without preconditions”, however the conservative New Democracy party had failed to achieve this primary goal “due to the reaction of opposition parties”.

Instead, Bill 4648/2019 is a watered-down vision, which allows Greeks to exercise their constitutional voting rights from their host countries after registering on a platform, provided they can prove that they have lived continuously in Greece for two years in the last 35 years, have tax numbers in Greece and can travel the distance to polling booths in major cities, which, in places such as Australia, aren’t always easily accessible. He made no mention of how many have registered so far, however urged eligible Greeks to head to the Greek consulates for assistance.

Dr Vlasis said the time has come for Greece to “cut the Gordian Knot of red tape and proceed to important changes in order to regain citizens’ trust”. With use of new technology, the government is looking to reduce the time needed to access services. He gave the example of birth certificates which will soon be made accessible in a few hours rather than current waiting times which stand at a few months.

“By the end of the year, all Greek missions abroad will be able to provide remote services via video conferences,” he said, pointing to 42 missions which already use the myConsulLive platform, including Melbourne, Sydney, Adelaide and Perth.

Round-the-clock services are already being offered in New York and London via a 24/7 virtual assistance chatbot which has been found to save time, as 70 per cent of phone calls made to Consuls refer to similar requests.

He also spoke of mobile passport units in the works with outreach visits to remote locations to help diaspora members living in regional Australia.

Acknowledging that language and culture are “what keeps us connected” as Greeks, 9 February was set as World Greek Language Day. A celebration of Greek language learning, young students and Philhellenes were invited to upload short videos explaining the reasons they choose to learn Greek – the result was moving and Dr Vlasis said he was “thrilled” to hear young students expressing their love of Greek language and culture in fluent Greek. No mention was made however, as to just how “fluent” the Greek is on a daily basis when it isn’t rehearsed.

However, celebration of world days without substance is naught, and so teaming up with the Stavros Niarchos Foundation, the Greek government contributed towards the setting up of the Staellenika platform, a digital tool for young people wishing to learn about Greek language and culture.

As Greek educators gathered at the Greek Centre of Melbourne to bid farewell to Manos Tzimpragos, the highly respected Education Officer and Principal of the Greek Community of Melbourne’s Language and Culture Schools, who is forced to leave after seven and a half years in the role due to being recalled to Greece, Dr Vlasis said that the Greek government is facilitating the appointment of educators and distribution of books. Unfortunately, there was no mention made of the quality of books where, in Australia at least, teenage students are not linguistically ready to tackle material created for their age and so resort to books for significantly younger pupils with topics and an approach that is not relatable to them.

A passing mention was made to the success of keeping Greek studies at La Trobe University, though no substantial address was made by Dr Vlasis regarding the consistent loss of languages in the Antipodes which has lead to the shrinkage of university programs. “Without the contribution of the Diaspora, La Trobe would not have been saved,” he said, adding that the standard cost of a chair of Hellenic Studies is huge – “millions of dollars” he said. He avoided giving a specific amount funded by the Greek government for the promotion of Greece and Hellenic Studies as asked, but added that the Greek government seeks funding from the private sector.

At a more positive level, English speaking tertiary programmes are being created for diasporans to study in Greece even if they can’t speak the language. There are currently 80 English-language programmes in operation. “What better place to further one’s education than the birthplace of philosophy?” he asked.

READ MORE: The Greeks of Australia who are going back home

Dr Vlasis said the “church is a pillar” which is “loyal to Hellenic heritage and an integral part of the multicultural Australian reality”.

He praised the work of the late Archbishop Stylianos, “a significant education and charismatic personality” who “contributed to bringing the church to the centre of Australian life”.

“The most impressive achievement of the Greek Orthodox Church has been the establishment of the St Andrew’s Greek Orthodox Theological College in Sydney in 1986. A vision shared by his predecessors, it was Archbishop Stylianos who successfully moved n 1981 for the realisation of the project,” Dr Vlasis said in reference to the first theological college in the Southern Hemisphere.

He said that Archbishop Makarios, who took over in 2019, brings “a new spirit to the church in Australia”.

“We look back to the glorious past but also look to our future,” Dr Vlasis said, adding that a Diaspora Day will be set up and many submissions for a possible date have already been sent.

“Greeks can boast of having ingenious ideas once again,” he said, though no mention was made of how many submissions had been received and which dates are being considered.

Diaspora Days are great and it usually costs little to designate a date on a calendar to honour Greeks abroad, however Greeks in Australia have often been overlooked. For instance, when a group of 31 renowned Greeks and Philhellenes of the diaspora were selected to make up the Greece 2021 Committee, helping Greece’s preparations to celebrate 200 years since the Greek Revolution of 1821 – there was not one Greek Australian listed among them.

Greek Community of Melbourne President Bill Papastergiadis once again highlighted the huge opportunity Greece has to harness the Greek Australian diaspora. A tireless advocate of closer ties, he reminded Mr Vlasis that an office is waiting for a Greek tourism officer to be sent by the Greek National Tourism Organisation. There was a sense of deja vu as the idea is not new, and always fervently welcomed by the Greek government though the office still sits empty. Mr Vlasis reminded Melburnians that they have a “very active” leader at the helm, always calling up, always advocating, but no commitments were made regarding a GNTO office similar to the offices Turkey has to promote its interests in Australia.

No mention was made by anyone, either, of the lack of Double Tax Agreement between Greece and Australia – a barrier for many Greek Australians when it comes to contemplating working in Greece.

“We want you back,” Dr Vlasis said, borrowing from the words of Alex Patelis, the Chief Economic Advisor to Prime Minister Kyriakos Mitsotakis at this year’s Delphi Forum online event. In an effort to draw back a portion of the 500,000 people who moved abroad, efforts have been made to upgrade remote work and also offer 50 per cent tax exemptions for the next seven years but much more needs to be done.

Dr Vlasis said the pandemic “constituted a chance rather than a sole challenge”, an opportunity to “change the image of Greece and make the brain drain a phenomenon of the past”.

An orthopedic by profession, Dr Vlasis no doubt knows that image is just skin deep and change requires more than lip service, more than designated days – it needs to strike at the bone of the matter.