The magic of Greece through summer memories

Neos Kosmos readers take us back in time on a journey filled with sun kissed days along the beautiful beaches of Greece, around ancient landmarks and nights surrounded by friends old and new For me, summer means carefree, fun, walks, but most of all, adventure. I am very lucky because all my summers in Greece were very adventurous.

My dad, or ‘Survivor Man’, as I called him when I was little, made sure he went to a different corner of our country every summer and I can say that in less than a decade I managed to get a good taste of the rare and unique beauty that I treasure.

Every now and then, when I am nostalgic, I ‘unlock’ the chest of the soul and pull out, one by one, the diamonds of my memories. Swimming in the Voidomatis river, evening walks in Parga, parties in taverns in Zakynthos. Beautiful, carefree moments under the Mediterranean sun, full of music tied to the voices of the people creating an electric atmosphere that cannot compare with anywhere else in the world.

One of my greatest memories from summer in Greece is when I was nine years old and we went on vacation to Kythira. It was mid July and very hot. We would immediately go down to the beach upon waking up

I remember the ecstasy I felt as I observed and admired the algae and the small colourful fish that I saw, until suddenly, out of the corner of my eye, I noticed something approaching me.

READ MORE: Greeks who came to Australia and realised that the grass is not always greener I turned my head and what I saw still seems like a dream. A huge turtle was moving – that’s how it seemed to me then – approaching me menacingly. It was green and much bigger than the canvas imitations that adorned my bed and from what I knew it would eat me. After all, it is true that they do not teach you everything at school…

I really thought he would eat me. I looked at it, it looked back at me and in the moment I shut my eyes tightly so as not to see my ‘end’ that I was sure was coming.

A few moments passed without anything fatal happening. I opened my eyes and realised that the huge caretta-caretta passed under me and continued its carefree wandering. 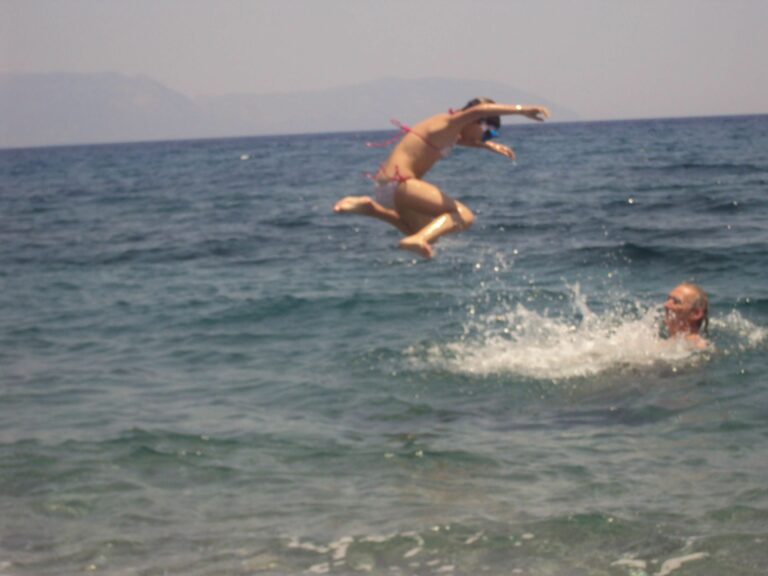 John Marinis by the island of Proti in Messinia

These were unforgettable moments. For those who do not know, Proti is a beautiful small island just opposite the Marathopolis of Messinia.

It is only a mile from the coast and is arid and uninhabited. However, it is a very interesting place with a history that dates back a long time.

READ MORE: International celebrities are flocking to Greece for the summer

The name of this island pays homage to the sea god Proteas, son of Poseidon. The story goes that because of his anger, the god Proteas took the form of a wild animal, a crocodile, and became an island – Proteus Island.

There are also preserved the ruins of an acropolis of the Mycenaean or pre-classical period, with a wall and a circular turret.

The island played an important role in the Peloponnesian War, in the battles between Athenians and Spartans around 424 BC.

All of Greece is a beauty, but I love magical Athens. On each of my trips I spend endless hours studying and admiring the incredible beauty and perfection of the Acropolis and other ancient monuments that make me so proud to be Greek.

After all, it is no coincidence that the Parthenon which is the largest building of the Acropolis, has been admired by the world for centuries now.

My photos were taken towards the end of the unforgettable summer of 2018.

From Mykonos to mainland, Greece is nothing short of a party. The land of adventure, fabulous beaches, lifestyle and hospitality. A country with incomparable philotimo. We didn’t know what to expect travelling in our early 20s and what our first time overseas as adults would be like.

Upon arrival we felt at home. Relaxation mode was activated and we got the hang of ‘Greek time’ nicely.

One moment we were in Melbourne having dinner at 6:00pm and the very next day we were out in Athens eating at 10:00pm, with Bouzoukia to follow, on a school night!

Everything is easy in Greece. You can island hop as easy as you can bar hop. You are a ferry or a flight away from another magical experience.

It’s safe to say sleep wasn’t a priority and we lived every moment to the fullest. I hope to do it all again some day soon, I cannot wait!

SEND US YOUR MEMORIES

Neos Kosmos invites you on a mental journey to the motherland, without restrictions, through your memories of past summers.
Send us your photos and stories of some of your favourite, unforgettable summer moments in Greece or Cyprus to share with our loyal readers.

Whether you were sipping a frappe by the sea, up in the mountainous villages getting chased by goats or dancing up a storm in a bar, we want to share what the Greek summer means to you.