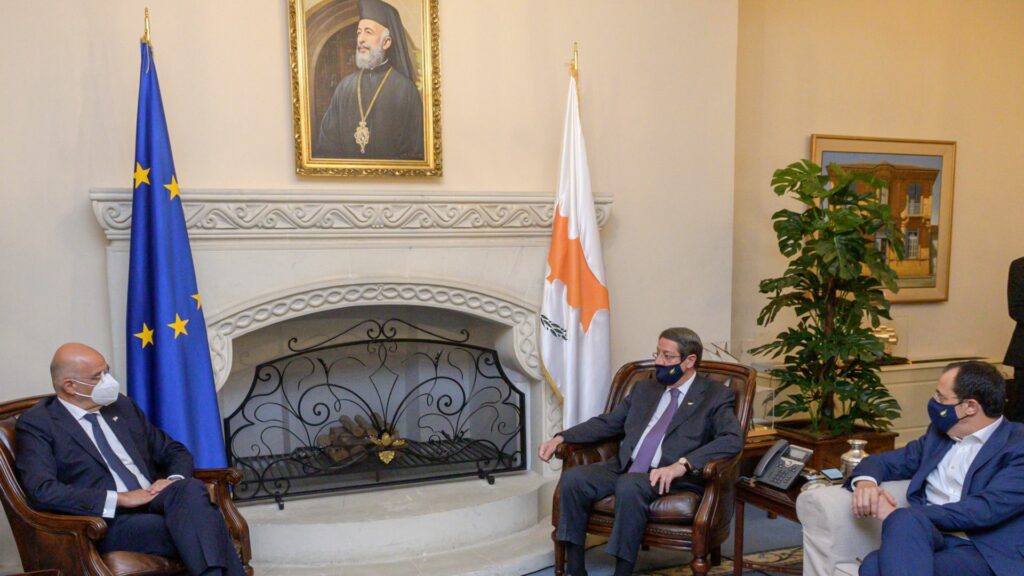 Mr Dendias had flown to Nicosia yesterday to meet with Mr Anastasiades in the wake of Turkish President Tayyip Erdogan’s visit to the occupied north of the island where he repeated his call for a two-state solution for Cyprus and announced plans to re-open of the abandoned Greek Cypriot resort of Varosha in Famagusta.

“Henceforth, we will take steps at the United Nations and the European Council and at all international fora in full coordination. Neither Greece, nor the Republic of Cyprus, nor, we think, the United Nations and the European Council will tolerate Turkish unlawful conduct, the imposition of fait accomplis on the ground,” Mr Dendias said in a statement after his meeting with Cypriot president and his counterpart.

The foreign minister said he would brief representatives of Greece’s parliamentary parties on Thursday, July 29.

According to the Athens Macedonian News Agency, Mr Dendias said that his presence in Nicosia symbolised Greece’s commitment to stand by the Cyprus Republic’s government and its people.

He said Mr Erdogan’s comments during a visit to the occupied north of the island that coincided with the 47th anniversary of the Turkish invasion of the island confirmed Turkey’s plans “to extend its occupation of Cyprus and establish a neo-Ottoman rule in the broader Eastern Mediterranean region.”

In statement posted on Twitter, US Secretary of State Anthony Blinken said that he had reaffirmed to Cyprus foreign minister Mr Chritdoulides that the US “condemns the Turkish Cypriot announcement with Turkey’s support on Varosha. This is unacceptable and inconsistent with UN resolutions. We’re pushing for a strong UNSC response (UN Security Council)”.

“As Chairman of the Foreign Relations Committee, I condemn President Erdogan’s plans to develop Varosha and promote a separate state in the north of Cyprus,” said Sen Menendez.

“To be clear, Turkey’s invasion and illegal occupation in the north of Cyprus is in violation of international law and must end. But in explicitly calling for two states on the island and planning to develop Varosha despite United Nations resolutions seeking special status for the area, Ankara not only threatens the Republic of Cyprus, but the security of the entire region,”

“Simply put, Erdogan is no friend of the United States. I look forward to working with Secretary Blinken to explore new measures that the Biden administration can take to ensure President Erdogan faces additional consequences for violating international law, and for his brazen determination to rob Cypriots from controlling their own destiny,” he added.

The senator said at hearing on presidential nominees for positions on the State Department that several US administrations had been passive in their responses to the situation in Cyprus.

“All we see is Erdogan continuing to encroach… in the exclusive economic zone of not only Cyprus, seeking to do so with Greece. … “It has played, in my view, a nefarious role in a variety of things in the region and unless we take an assertive role and push back, we are going to find ourselves with a significant challenge,” Sen Menendez said.