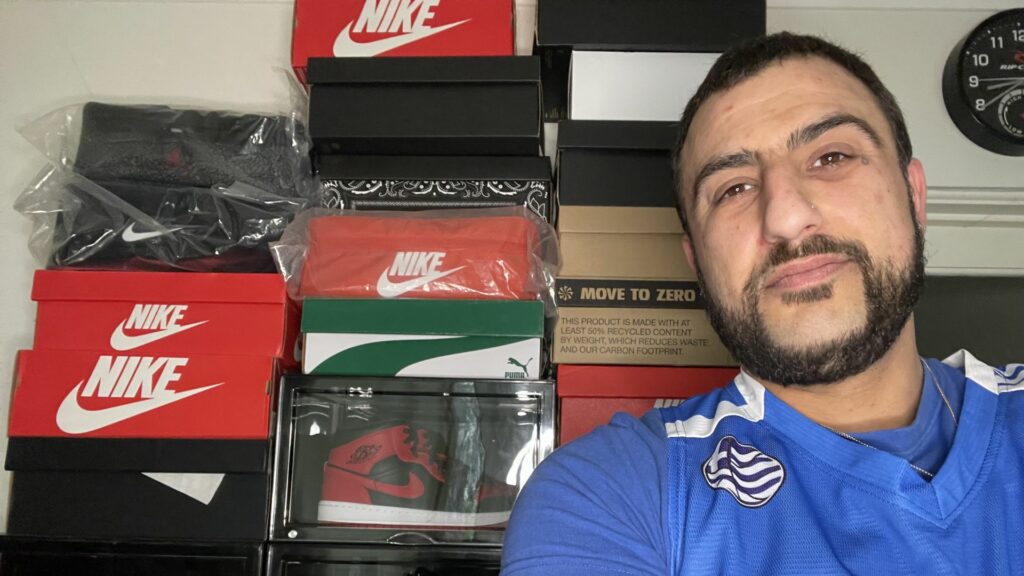 When American basketball legend Michael Jordan first put his name to a pair of Nike Air shoes in the 1985 did he imagine he would spawn a $2.1 billion industry in the re-selling of designer sneakers? Christopher Karathanasis who liked to buy a pair of branded shoes to wear soon came to see there was value in re-selling them unworn and in their unopened boxes.

“It is a bit crazy, I never thought I would be a ‘sneakerhead’, but I saw people were making good money from selling them on. It is a hobby that is now turning into something more,” Mr Karathanasis told Neos Kosmos.

He began collecting in 2017 and now has 90 pairs in his collection. This may sound a lot of shoes but is really very modest compared to some who have collections numbering in their thousands of pairs.

“Sneakerheads include celebrities who have collections worth millions. I have walk-in robe full of shoes and I have sneaker display boxes with magnetic lids to show off the shoes I want to sell.

Pride of place in at present includes a 2020 re-release of Air Jordan 1 Banned and then there is a pair of Air Max Plus TN Tiffany.

“My absolute favourite at the moment is a NikeS B Slip on Janoski,” said Mr Karathanasis.

“You buy the shoes and store them until they are out of stock or no longer widely available and then you sell them to meet the demand. Once the shoes are sold out and no longer available at retail, the value appreciates. It can be profitable if you go about it on a large scale,” said Mr Karathanasis who works as a chauffeur in the Mornington Peninsula area but the work is seasonal and the pandemic has not helped.

Most of the selling he does through a global reselling platform Stock X but he has recently also made use of the Sydney based pushas.com website.

“There are a lot of sneakerheads out here it is a sub-culture that is mainly common among millennials and younger. The older sneakerheads are mostly based in the US,” said Mr Karathanasis, “Sneakerhead culture has been around since athletes stared wearing branded shoes in the 1980s. They had no idea what a phenomenon it would become.”