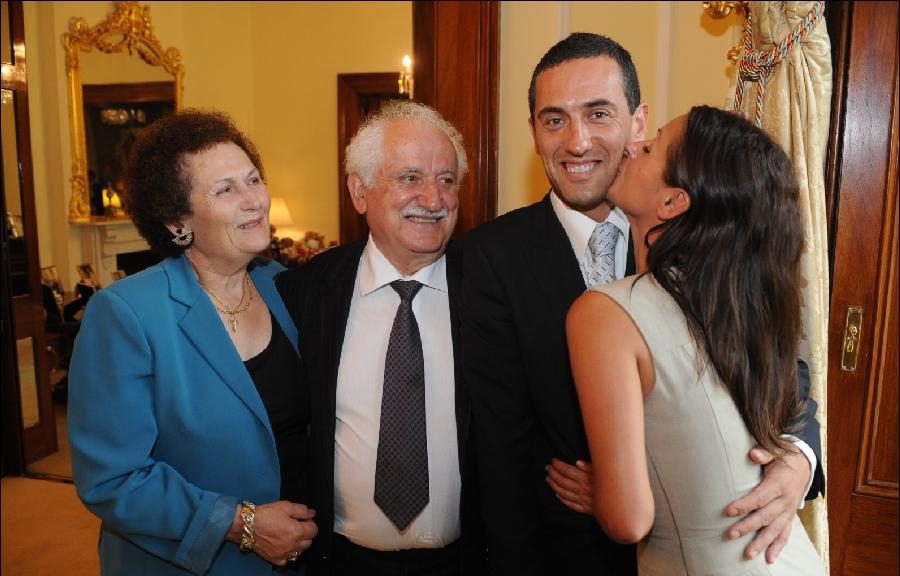 On Tuesday March 3 an excited crowd had assembled at Government House, Adelaide, to witness the swearing in of two new Ministers in South Australia’s new Rann cabinet.

Amongst the attendees was Antonis Koutsanotnis senior. At one point he nudged his son and said: “Fifty years ago I was on a boat to Australia with no money in my pockets… who would have thought that I would be living this moment today.”

His comment encapsulates the realization of theAustralian multicultural dream.

The son of Antonis and Dimitra from  Peloponissos, Greece, Tom Koutsantonis, became the first South Australian MP of Greek descent to rise to a cabinet position.
Koutsantonis, who was recently appointed Minister of Correctional Services, Road Safety, Gambling, Youth and Volunteers, has been in politics for some time  considering that he is only 37 years old.

He was first elected as an MP at the age of 26. Koutsantonis is the second youngest ever to be elected in State Parliament only to be beaten at record setting by his good friend and current speaker of the House, aged 25 at the time Jack Snelling.
The fact remains that at that young age most people have different priorities in life. So it’s only natural to wonder if he ever felt overwhelmed at any point.

“It felt natural, it felt like this is what I always meant to be doing,” he replied candidly during a phone interview last week.

Tom Koutsanotnis is a political junkie. “From a very young age I was always interested in politics and current affairs. Politics and sports were my two passions,” he highlighted.

While in university he was working as a taxi driver to cover his expenses, but Koutsanotnis knew that politics was his calling in life.

He became a political insider of the Labor Party landing his first post working for the now Attorney General Michael Atkinson. From then on it was a matter of time climbing up the ALP’s grass roots ladder as he entered the powerful Shop Distributive and Allied Employees Union.

In 1993 the Labor Party lost government in South Australia and the seat of West Torrens changed hands from ALP to Liberal. It was this Western suburbs’ seat in Adelaide that Koutsantonis managed to reclaim in 1997 and retain ever since.

Reflecting at those early days he admits that “especially the first four years were a learning curve and maybe I should have spoken more in Parliament.”

However, one thing became certain; that Koutsantonis born in Cowandilla and raised in Netley knew how to represent his constituents.

“I don’t want to let anyone down,” he underscores.

This is how he has earnt the reputation of being a tough political negotiator.

“I’m very passionate about making sure that the Western suburbs and indeed South Australia get their fair share,” Koutsantonis adds.

During Koutsantonis’ political journey, the Greek community has been a very supportive ally and friend.

“They’ve always been there for me,” he points out. The feeling is mutual, as many leaders of the South Australian Greek community rejoice in Koutsantonis’ ministerial appointment and reveal a sense of pride for having “one of our own in cabinet”.

According to these Greek leaders, Koutsantonis is not shy embracing his Greek identity and reciprocates the support and backing that he enjoys from the community.

Koutsantonis states unreservedly: “You can love your mother and your wife at the same time.” His Greek roots will always be an integral part of his life and this is why he refused to “shorten” his name when he entered politics. “If I change my name it makes it harder for people to come after me,” he stresses.

In the past month Koutsantonis’ life has changed quite rapidly.

He married Anthea four weeks ago and became Minister a couple of weeks back and according to a senior Labor Party official, who wished to remain anonymous, Koutsantonis “is a political force to be reckoned with”.