Wrap up of the Athens Film Festival: Cinematic dreamscape

Bill Mousoulis spent many a late night sampling the cinematic experience that is the Athens International Film Festival. 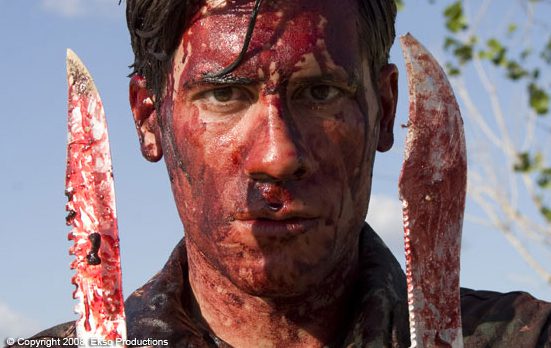 Evil in the Time of Heroes.

The festival ran from September 16 to 27, and was clearly a success with Athenians, who seemed to swarm the four cinemas continuously. Many sessions were sold out, especially for conventional concoctions such as the Meryl Streep vehicle Julie & Julia, but the enthusiastic audience ensured that even the more difficult art films had a reasonable number in attendance.

Having no screenings in the daytime, not even on the weekends, the festival has a distinctively nocturnal buzz, the warm weather rolling the late-night screenings and early-morning parties along. Where else but Athens can one stay up till 4 a.m. debating the merits of one director over another? Plato would be pleased!

As I mentioned in my report two weeks ago, this year’s festival had a certain aura to it, about the Greek films in the program, several of them indeed premiering (to Greek audiences that is). I didn’t catch all of them, but the ones I did see were indeed impressive.

Dogtooth (directed by Giorgos Lanthimos) is the year’s “hype” film, because it won the Un Certain Regard award at Cannes in May. It’s a study of a family locked away from the world, and their bizarre habits. It has a formal “art” style, and a pleasingly neutral tone. It is a good film, but too highly reminiscent of the work of Austrian master Michael Haneke to really be considered original or groundbreaking.

Evil in the Time of Heroes (dir: Giorgos Noussias) is a zombie film, and pleasingly far from a standard one. For a start, it has a “backstory” set in Ancient Greece, and that is quite a delight, seeing the Ancients turning into zombies. But the main story, in contemporary setting, is the film’s trumpcard, as it skilfully weaves its way through an assortment of colourful characters and situations. A slight film, but a funny one.

Madonna Calls Fassbinder is a short film from the director Dimitri Athanitis, who has actually made a swag of features. A simple piece, we see a man in a restaurant look over to another table and exclaim “It’s Madonna!” Like a demented TV soap, we see Madonna’s agent and secretary surmise that what Madonna’s career needs is the participation of German film director Rainer Werner Fassbinder. In the next scene, they discover that he died years ago. A devilish, hilarious film.

And the one other Greek film I saw was Once in a Lifetime (dir: Nicole Alexandropoulou), a well-made documentary about the radio personality Giannis Petridis, who was a pioneer DJ, from the late ‘60s, mixing styles and championing the independent artist (like John Peel did in England).

It was great to see this interesting individual on screen in all his glory, and it was quite provocative hearing singer Giannis Aggelakas (from legendary Greek post-punk band Trypes) slamming into the Greek personality, definitively stamping it as “insular”. Take that! Ouch.

This Athens Film Festival for one is an attempt by the Greeks to connect with the outside world. There were many international guests invited to the festival, some of them (such as the Japanese Sion Sono and Dane Jorgen Leth) cutting quite eccentric figures.

My favourite film was Ne Change Rien, by the Portugese director Pedro Costa. Shooting in France, Costa follows actress/singer Jeanne Balibar around, as she rehearses songs with her band, and then plays them live to an audience.

Far from a conventional documentary, the film has no voice-over or any other explanation – all we get is mesmerisingly beautiful black-and-white images and long takes (sometimes 6 or 7 minutes in duration).

Costa was also a guest of the festival, and he was quite amused when I explained to him that when Greeks say “Ela” into their mobile phones, it means “Come”.

Still flanked by its older brother, the Thessaloniki Film Festival (turning 50 this year), the Athens Film Festival is at least out there, existing, saying “Ela” to films and filmmakers in the world.

This is encouraging. And with films like Dogtooth making an impression in festivals worldwide, it’s a promising time for Greek cinema.