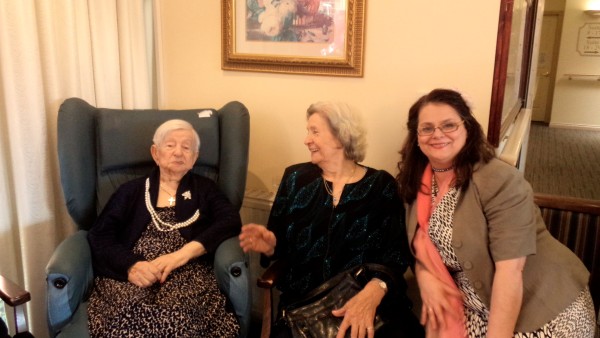 It was a century of achievements and love, but also hardship and difficult moments for the 100 years of life that Ralia Mingos Patiniotis celebrated on December the 13th. Born in 1913 at Tenedos, Turkey, she recently celebrated her 100th birthday. Currently living in Melbourne with her husband, four children, and all of her grandchildren, she could not have been merrier when celebrating after all the wonderful years of being alive.
But her life was not always wonderful. Continuously having to migrate to a number of different countries as a child, Patiniotis had to get used to leaving family and friends behind. After the Treaty of Lausanne in 1923 was signed and Tenedos and Imvros were given back to Turkey, Ralia and her family had to migrate to and fro between Greece and her home land. She was still expected to go to school, but it was difficult missing Tenedos. In 1927, her mother Despina Kazakos had finally decided it was time to go back to their home, and stay there.
At the age of fifteen, Ralia went to work for the Christodoulou family, where she was received with respect and welcomed as a member of the family. She continued to work for them for 5 years, until she met and married Nikolas Patiniotis, and started her own family. The two were married in 1937 and had five children, Aphrodite, Omeros, Efstratios, Athanasios and Yianni. Aphrodite died at a very young age, causing Patiniotis to mourn for her beloved daughter’s death. The aftermath of her daughter’s passing did not leave her quickly, but she learned to remember that her daughter was in a better place.
As time passed, a good friend of Nikolas convinced the family that they should move to Australia in order to obtain better lives. The family were happy in Tenedos, but knew that migrating to Australia would be better for their children and their children’s futures. Nikolas left in 1954 on the ship “Arosa Star”. The rest of the family followed soon after.
Although they were happy in Australia, Ralia never forgot Tenedos and the love for the country she once grew up in. For this reason, Ralia would travel to Tenedos in later years with her children and grandchildren to share with them its beauty and honesty. Till this day, Ralia still celebrates Greek traditions and ‘giortes’, and loves to spend these occasions with her immediate family, extended relations, and friends. She has made sure to live everyday as her last, and to love and share love with everyone around her.
Sofie Arvanitou, one of her beloved friends, describes Ralia as “a daughter, a sister, a wife, a mother, an aunt, a grandmother, a great grandmother, and a friend to all”.
May she celebrate her 100th birthday with happiness and love, and may it not be a sign of her finishing years, but rather a symbol of many more to come.