Australian director Baz Luhrmann has cast another Greek Australian in the musical production of Strictly Ballroom: the musical 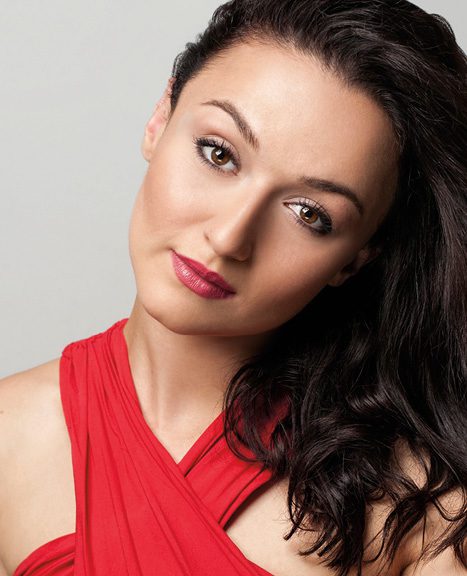 “We are pretty excited that there are two Greek girls in the lead, and for me, I am playing the role Gia Carides made famous so that’s a real privilege for me.”

When performer Sophia Katos first heard about the auditions for Strictly Ballroom: the musical she knew she had to be part of it. Having dark, curly hair and being a self-confessed nerd, she resonated with the main character Fran. And it wasn’t until the process had her face-to-face with renowned Australian director Baz Luhrmann that he saw something else in this Greek Australian young lady.
“He saw the feisty nature that I have shine through in the final rounds of the auditions and he saw Liz – the character I am playing – in me,” Sophia tells Neos Kosmos.
“To play Liz is such a gift because she’s larger than life and hysterical and to do that every night is a pleasure.”
Liz, the character, was made famous in the 1992 movie by fellow Greek Australian, actress Gia Carides. Gia took to that role like a duck to water and had her self-assured Hellenic nature shine through in her performance. But it wasn’t only in the film that Baz chose to cast a Greek Australian. Both female leads in the musical will be played by young Greek Aussies – Sophia as Liz and Phoebe Parantos in the role of Fran.
“We are pretty excited that there are two Greek girls in the lead, and for me, I am playing the role Gia Carides made famous, so that’s a real privilege for me.”
But what’s it like for Sophia to tackle such a performance?
“She really nailed it, didn’t she?” says Sophia, who confesses she’s been practising her screaming as Gia did in the larger than life role. However, she says that Baz is asking of his cast to not only honour the roles, but bring themselves to the fore as well.
“Baz gives you the freedom to not feel like you have to copy anything,” Sophia explains. “Obviously it has to be those characters and that’s what the audiences loves and what I love, but he’s cast it so our natural energies are where they have to be.”
Her natural energy is of a feisty lady and she says she has that in her, that ‘nevra’ that will allow her to excel in this role. Even when she told her sister that she was cast as Liz – in lieu of Fran – her sister said “that’s you! You’re that character”.
A huge fan of the film, Sophia grew up watching it on repeat to the point she wore out the video, and remembers as a child wanting to grow up to one day marry Paul Mercurio.
“I’m a huge fan of Baz Luhrmann’s – his films really speak to me,” she says, “they are big and passionate and the characters are so funny.”
As a NIDA graduate of musical theatre and acting, Sophia was always encouraged to follow her artistic pursuits by her family. At 84, her grandfather is still the lead psalti at their local Greek Orthodox church in Geelong and her grandmother was the village singer in Greece always asked to sing at weddings and celebrations.
“It’s always been a natural expression at home and we are always celebrated when we sing and to enjoy it for what it is.
“When I said to my parents this is what I wanted to do – and I knew that at a young age – it was always encouraged.”
Sophia says her chosen career allows her to “step into worlds you ordinarily wouldn’t” – such as her time as a performer in Cafe Rembetika.
“I learnt so much about the history as I had no idea about rembetika before I did it,” she says.
Getting to travel the country with Greek musicians, she says her time in this production allowed her to share a special part of Greece’s history with Australian audiences, but also make lifelong friends.
“After a show we’d go to a restaurant and the boys would whip out their instruments and the restaurant would give us drinks,” she says, recreating 1920s Athens in Australia.
“It teaches you as an artist to really do your homework and be respectful,” she says of her time in Cafe Rembetika, remembering a compliment received by an older Greek man saying her voice was authentic to the time.
And now, she’s stepping into the world of ballroom – a whole new discipline for her.
“I find the whole world of ballroom dancing fascinating,” she says, learning about the characters not only in the musical – but the discipline as a whole. And learning about techniques of ballroom, flamenco, tango and all the dances she needs to perform effortlessly night after night is definitely keeping her busy till opening. Her job – like the rest of the cast – is to make the audience believe that they are all professional ballroom dancers. And to be entertained by this dynamite Greek Australian all the way.
Strictly Ballroom: the musical opens in Sydney in March. For tickets and event information visit www.strictlyballroomthemusical.com