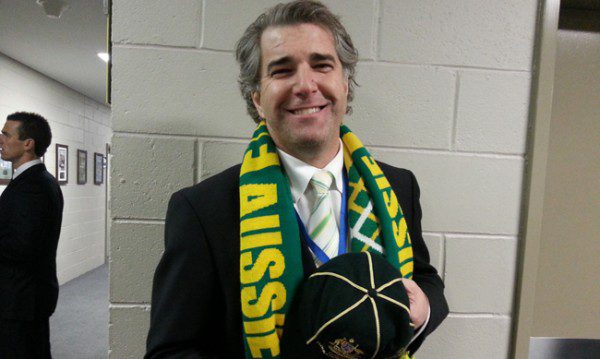 There are probably six teams that can win this World Cup for me. I think a lot of the South American teams – Brazil, Argentina – are going to be favourites. Maybe Colombia and Uruguay are going to have good World Cup but I don’t think they can win.
Then you have Spain or Germany from the European side that are going to be very hard to beat. Another team that I think will do well is Belgium.
When it comes to Greece, I think Greece has a very good chance to make it to quarterfinals.
My heart is with Australia and Greece, but I have to be honest – I don’t think Australia can get through the group. But let’s not judge Australia. A lot of young players came in, first time at the World Cup. I want them to go there and play with no fear, to play relaxed and to play together and give everything they have, and I think if they do that we won’t get disgraced and we may even surprise someone.
Ange Postecoglou is a very good appointment. I like what he has done until now. Of course, we can’t expect him to go there and make the boys play well, he has only been there for six months. He had to let go of some senior players. He kept Bresciano, Cahill, and he has some really good young players like Mile Jedinak, Spiranovic.

The competition is being held in South America, and no European team has ever won there. It’s hard to imagine that would change at this World Cup, with Brazil, Argentina, Uruguay, and Chile all being so competitive.
From an Australian perspective I think we are all quite realistic about the challenges we face and the stage we are at in the team life cycle. We are at the start of hopefully building an era of becoming more competitive.
When Greece won the European championship, it showed they were starting to fulfil some of the potential they have always shown as a football nation. Now teams find it difficult to beat Greece.
Ange Postecoglou is the person I hold in the highest esteem as a former teammate at South Melbourne Hellas. He was my captain, he always led by deed and action and is a super motivator and a great student of the game. So one thing that the Socceroos do have is a football zealot at the helm, a man experienced at the international level, with great commitment to his football philosophy, which I think in many ways reflects the modern Australian approach to football.

Charlie Yankos
(49 caps and in Brazil to support the team)

I believe it will be a South American team to win the Cup. If not, then Germany. They did exceptionally well at the last World Cup and they have a lot of good players. Most people are going to predict Brazil. They have a great team, they are experienced, but also under a lot of pressure at home and a huge amount of expectation. The only other dark horse from that perspective – if Messi plays and he plays to his potential – then I believe Argentina could have a shot at it.
From Australia and Greece, no one is going to expect much, that’s the reality. Potentially there will be some upsets, but I don’t think that the upsets would be enough to push people past the first group. Do the upsets mean that Australia can beat Spain – no, I don’t think so! People have to appreciate that we have a relatively new coach in this environment, we’ve got young players. In terms of experience and exposure at the highest level of football – it’s not there. If they go out there and play as hard as they possibly can, that’s what we should be proud about, it doesn’t matter what the result is.
Ange – I think it’s a hard one, it will be challenging for him. His preparation has only really been when the squad got together 10 days ago. And then the new players – it’s not like they had 30-40 games for the team, these kids haven’t done that.
As a person I think Ange is wonderful. He’s gained the respect of all supporters as a person, due to his engagement for the game with the people. I think that needed to happen. We needed to have a bit more connection between the Australian representation and the people. Just the team – they didn’t want reporters, spectators around – whereas Ange has a different philosophy – engage with people.

My thoughts are on Brazil and Spain, one of the two. I don’t think Australia will go through the first round, but I still have faith in Greece, they still have the possibility of going through to the second round. They are a team that doesn’t allow too many goals, so they have better chances than Australia.
There is no easy group. Everyone keeps saying that Group C is difficult – but you’ll always find teams that surprise in the group, and you’ll always find those that don’t perform up to expectations. Australia is obviously in a difficult group with Spain and the Netherlands, but all groups are difficult.
When it comes to Ange Postecoglou – I played against Ange, and I know him quite well. I think he is going to do a great job, but I also think we don’t have the quality of players that we had in previous years. So, in realistic terms, I think it’s a building thing for Ange, looking to the future, the Asia Cup and the following World Cup. He’s done a great job, he picked a lot of young kids, and hopefully it will pay off in the next couple of years.
This article first appeared in Neos Kosmos’ World Cup Magazine