Sponsors and Greek government gift to Greek Community of Melbourne

The Greek Orthodox Community of Melbourne announced that Leonidas Argyropoulos funded a scholarship program for Alphington Grammar to the value of $50,000 while the Greek government has provided $25,000 for the Antipodes Festival. 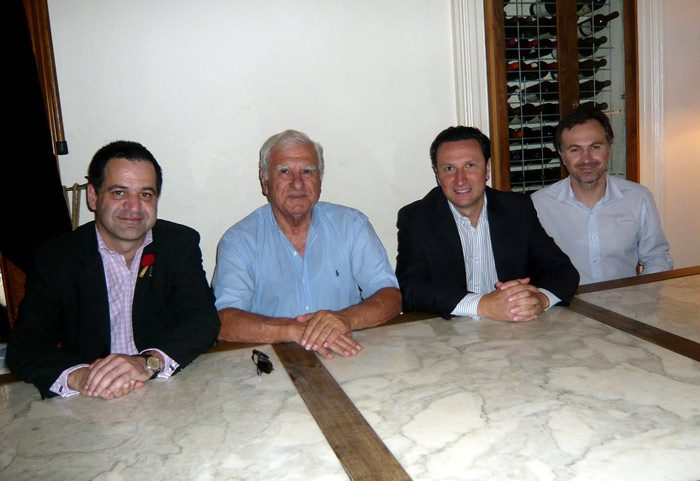 Mr Argyropoulos Snr (2nd from Left) with Papastergiadis (to his right) at gift announcement.

The President of the Greek Orthodox Community of Melbourne, Victoria, (GOCMV), Bill Papastergiadis has gone out knocking on doors the last few weeks and has come back with goodies.

He was smiling broadly on Thursday when he announced to Neos Kosmos English Edition (NKEE) that Leonidas Argyropoulos was funding a scholarship program for Alphington Grammar to the value of $50,000.

Alphington Grammar, is now in its 25th anniversary which Mr Papastergiadis said was a “significant milestone for the school.”
He went on to emphasise, “This is the first scholarship program for Alphington Grammar and the funds offered by Mr Argyropoulos and his family will enable seven scholarships to be offered over a number of years.”

He added, “This is a major contribution, that follows in the footsteps of the generous donation by the Andrianakos Family towards the Alphington multipurpose hall.”
Mr Papastergiadis believes that Mr Argyropoulos’ gift also “confirms the general community’s support for Alphington Grammar and provides the school with an opportunity to pursue excellence in fostering scholarships for academic, sporting and other programs.”

Alphington Grammar has secured a planning permit for the multipurpose hall as well as a grant by the Federal Government of $2 million towards the construction of six classrooms.
Mr Argyropoulos, as was reported in a media release from the GOCMV, told the President of the Greek Community that it was “his privilege to make this contribution given the importance which Greeks place on education.”

The announcement of Mr Argyropoulos gift, was followed on the heels of another announcement earlier in the week that the Greek Government was providing $25,000 for the Antipodes Festival that takes place every March.

The cheque was given to Mr Papastergiadis, during a recent meeting with the General Consul of Greece in Melbourne, Christos Salamanis. Mr Papastergiadis thanked the Greek government and especially the General Secretariat of Hellenes Abroad that provided the money for their ongoing support.