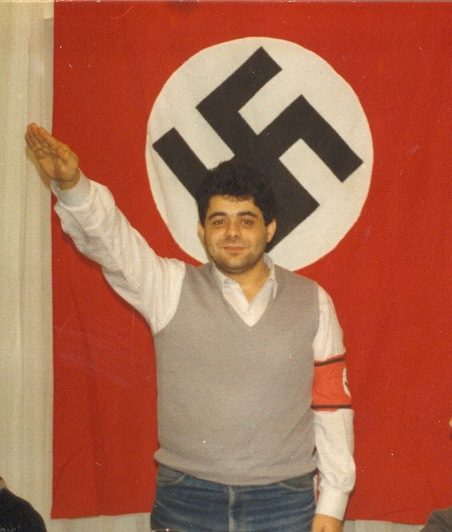 As an investigation into the alleged criminal activities of Golden Dawn continues, a barrage of pictures released this week is expected to bolster the case against Greece’s far-right party.

One of the photos shows a young Michaloliakos, currently in pretrial custody at Korydallos Prison, performing a Nazi salute in front of a large swastika. It is not clear when the picture was taken.

Another image shows Athens mayor candidate Ilias Kasidiaris with a group of six men performing the Nazi salute while holding a flag emblazoned with the swastika. One of them has been identified by local media as murdered GD member Lambros Fountoulis.

GD did not question the authenticity of the pictures.

“The collaborators of the Fourth Reich who have pillaged the country are anxious to find a way to deal with the nationalist movement with 30-year-old photographs,” a statement released by the party said.

“The Greek people who have been slapped with the brutal austerity policy are indifferent to the ridiculous systemic propaganda and acknowledge that GD only fights for Greece and the Greeks,” it said.

In a related development, Artemis Matthaiopoulos became the latest GD MP to be granted an extension in the ongoing probe. His deposition was postponed to June 30 in the wake of a request for the dismissal of special magistrates Ioanna Klapa and Maria Dimitropoulou filed by Michaloliakos earlier this month.