Walk With Me, walk with George

A mysterious disease won’t stop five-year-old George Bozinis from taking part in this Sunday’s Walk With Me in Melbourne, raising awareness about people with disability 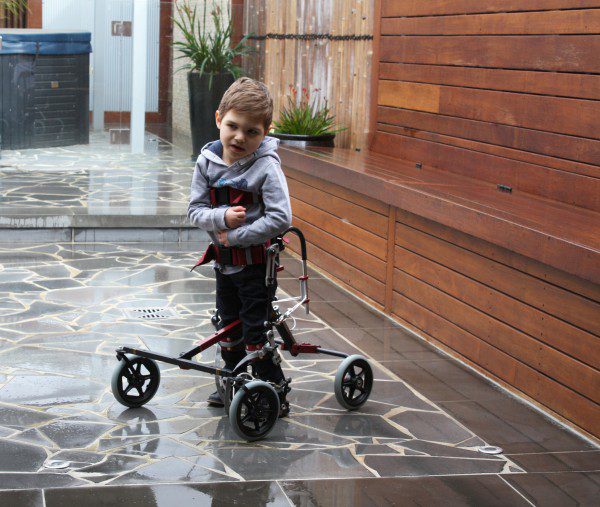 At the age of only five, George Bozinis’ body can barely produce the energy he needs to eat and swallow – let alone walk or crawl.

Due to the rare genetic mitochondrial disease specialists believe he has – but is yet to be officially diagnosed with – as a five-week newborn, George even struggled to breathe. At the age of two he was finally able to sit on his own.

He had decreased muscle tone, difficulty sucking and limited vision from birth. At two months old he started having regular apneas where he required resuscitation.

“One month later George ended up in ICU where he was intubated as his apneas were getting worse. An MRI then showed lesions which indicated a possible mitochondrial disorder,” George’s mum Cristina Bozinis tells Neos Kosmos.

Doctors said that George was unlikely to live past two years of age.

At the age of five, the always smiling boy keeps defying the odds. Not only that he refuses to fulfil doctors’ predictions about his life span – he also started walking.

With the help of Scope, a Victorian disability service provider and a not-for-profit organisation with a mission to enable each person to live as an equal citizen, since recently George has been able to walk without his parents’ help.

Now, with the Hart Walker provided by Scope, he is enjoying his freedom.

“It gives him the freedom to actually make the steps and walk. Before, he was able to make the steps when we would hold him. This equipment helps him stand, so he can make the movements to walk. He is doing all the hard work on his own but the Hart Walker provides him the support,” Cristina says.

And without the support of Scope, the Hart Walker would be a hard-to-afford equipment for the young Bozinis family.

“If Scope didn’t exist in Victoria, I don’t think we would have a chance to have such equipment. The Hart Walker costs $7,000 – and it was purely funded through Scope.”

This Sunday, Scope will stage its annual Walk With Me at Birrarung Marr, Melbourne, to raise money and awareness to help those like George.

Now in its fifth year, Walk With Me is a national 2 km or 4 km walk that raises awareness that one in four Australians are impacted by disability.

“While it is only a short walk for some, Walk With Me is a real challenge for others. It redefines the traditional notion of an event challenge. It’s not about running faster, swimming further or cycling longer distances. It’s an event challenging us to take the time to walk alongside people of all abilities.

“It is an opportunity to support and celebrate the diversity within our community in an inclusive and festive environment,” Scope CEO Dr Jennifer Fitzgerald tells Neos Kosmos.

George and his parents Bill and Cristina Bozinis will make their way to Birrarung Marr on Sunday. Having nearly lost their son on many occasions in only five years of his life, they take every day as a bonus.

“We don’t know how long he has to live as the doctors still believe George has a mitochondrial disorder, even though he hasn’t been diagnosed yet.”

For now however, George is a bubbly and always smiling toddler, with a fancy walker and always very vocal to express his feelings and opinions.

“George is not able to formulate words, however he communicates to you in his own language – he is very verbal,” Cristina says with a laugh.

“He is so gorgeous – after all, that’s what makes us get through everything.

“While George’s condition remains undiagnosed, we live in hope and we cherish each day with him. The origins of the disease are still unknown. It’s good luck that we still have him.”

For people with a disability

With recent research demonstrating that Australians with a disability experience significantly lower levels of wellbeing compared with the rest of the population, Dr Jennifer Fitzgerald agrees that more awareness needs to be raised about people with disabilities.

“With the introduction and roll out of the National Disability Insurance Scheme across Victoria and Australia, it will mean that people with a disability have access to the services and supports that they need to achieve their goals.”

As one of the largest providers of services to people with a disability in Victoria, Scope supports the needs of people with physical, intellectual and multiple disabilities and their families.

“At Walk With Me, the whole community comes together to celebrate the diversity within our community in an inclusive and festive environment. There are always lots of families with children who attend the walk as there are kids activities and entertainment on the day. This year, Peppa Pig is performing two live shows at the event,” Dr Fitzgerald tells.

Providing family, friends, colleagues, businesses and members of the general public with the opportunity to make a difference in the lives of people with a disability, Walk With Me is also a fundraiser.

With over 20 Dick Smith Walk With Me events to take place across Australia in September, all funds raised will be distributed to provide vital disability services to children, adults and their families.

Over 700 people are expected to attend Sunday’s event in Melbourne.

“Walk With Me in Victoria raises money for Scope so we can continue to support people with a disability and their families, like George,” Dr Fitzgerald says.

Join the Scope and Dick Smith Walk With Me on Sunday 7 September, at Birrarung Marr, Batman Avenue, Melbourne, from 9.30 am to 2.00 pm. Visit www.scopevic.org.au to register. To donate to George Bozinis’ team, visit https://wwmemelbourne2014.everydayhero.com/au/cristina