Sydney-based band Oxymoron will join forces with Greek French international star George Perris, as they perform their Hadjidakis tribute show at the Factory Theatre on Sunday 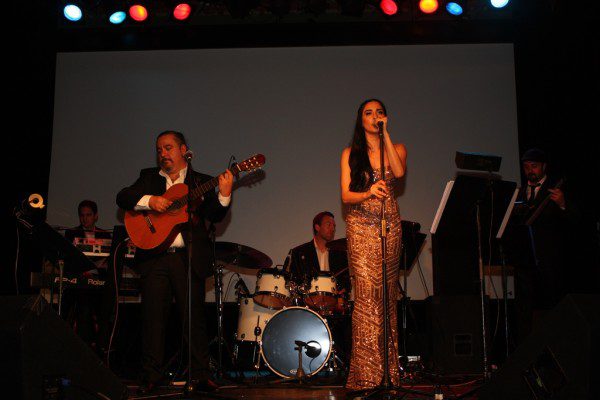 After having presented their Tribute to Manos Hadjidakis show at the Sydney Greek Festival earlier in the year, to an audience of over 300 people, Sydney-based band Oxymoron will take it to the stage of the Factory Theatre this Sunday, with a special guest in the international star, Greek French singer George Perris.

Led by Nikos Sousamidis and with George Nikolopoulos and Tasoula Kallenou on vocals, there was no denying the chemistry on stage was electric, with Tasoula and Nikos’ spirited banter adding to the uniqueness of the performance and leaving the crowd wanting more.

After repeated public requests Oxymoron will be back on stage at An Intimate Evening with George Perris with their Hadjidakis tribute show. Performing some of Hadjidakis’ hits in an original and unique way, it is sure to be a memorable evening with plenty of surprises in store.

“Oxymoron is one of the best local bands and the most obvious choice to have alongside international guest George Perris,” said Nia Karteris, the chairperson of the Greek Festival of Sydney.

“We look forward to working with them on many more performances in the future.”

George Perris will join the intimate show, hot off the back of his Australian performance debut as a special guest alongside Tina Arena on her national ‘Reset’ tour, and after releasing his new album ‘Picture This’.

Oxymoron and George Perris will perform on Sunday 14 September at the Factory Theatre, 105 Victoria Road, Marrickville. To book contact The Factory Theatre on 02 9550 3666 or visit www.factorytheatre.com.au