Official opening of the exhibition ‘Gods, Myths and Mortals’ marks the start of a great collaboration of Melbourne’s Hellenic and Athens’ Benaki Museums 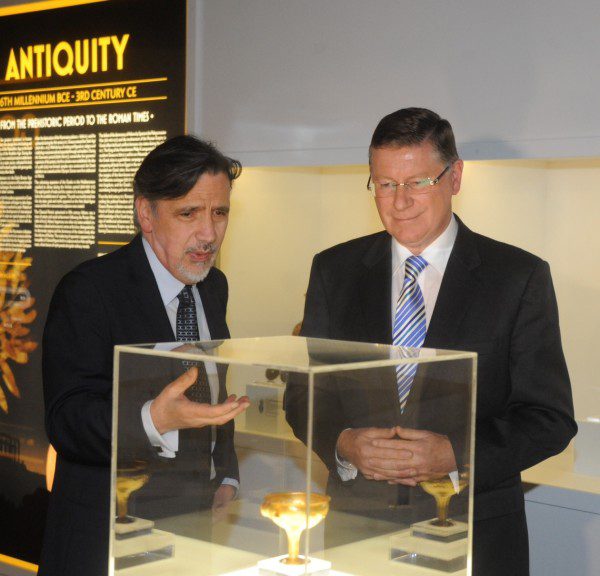 Eight thousand years of Greek civilisation are now on display at Melbourne’s Hellenic Museum, as on Wednesday Victorian Premier Denis Napthine officially opened the exhibition ‘Gods, Myths and Mortals: Greek Treasures Across The Millennia’, on loan from Athens’ Benaki Museum.

In the presence of Ms Irini Geroulanou, deputy director of the Benaki Museum, and former Greece Minister for Culture and Tourism, Mr Pavlos Yeroulanos – great-grandchildren of the famous Benaki Museum’s founder, Antonis Benakis – a priceless Greek collection that will call Melbourne home for a decade opened its doors to the audience, with artefacts such as a more than 2,000 year old luminous golden wreath and a famous gold kylix as its crowning treasures.

The Hellenic Museum was founded in 2007 by Melbourne businessman Spiros Stamoulis and is housed in one of the city’s most elegant colonial buildings, the Royal Mint.

Addressing the large audience at the crowded Hellenic Museum, Premier Denis Napthine congratulated the organisation of the collaborative exhibition and stressed the point that Melbourne is the capital city of Hellenism in Australia and perhaps in the wider Greek diaspora.

“The theme of the exhibition is a journey, and that journey is a Greek history,” Premier Napthine said.

“This collaboration means a lot to us, as Benaki Museum is fond of organising exhibitions and sending exhibitions all over the world. There are a lot of Greeks here in Melbourne, and with this collection we are giving them the opportunity to learn all these charming stories that are in Greek civilisation,” Ms Geroulanou said.

“The exhibition we brought to Melbourne is a small Benaki, it’s like a snapshot of Benaki Museum, that tells a charming story of Greek civilisation and shows its continuity and its relation with other civilisations.”

Close to 15 items of the Benaki Museum permanent collection, that hardly ever leave the museum’s glass boxes, were sent to Melbourne to feature at the Hellenic Museum exhibition for the next ten years.

“We thought that we shouldn’t keep everything for ourselves. So we didn’t send ‘spare parts’, we sent very good pieces.

“There were people crying when the objects were leaving for 10 years. It was very emotional,” Ms Geroulanou said.

Featuring treasures that bring 8,000 years of Greek civilisation to Melbourne’s doorstep, the collection includes pieces from each major period of Greek history, from the Pre-Historic era through to the formation of the modern Greek State: from neolithic pottery to Minoan figurines; from Byzantine icons to post-Byzantine secular art and costumes; and Neo-Hellenic art and weaponry, including ornate swords and pistols belonging to Greek revolutionary heroes Kolokotronis and Mavromichali.

Hellenic Museum CEO John Tatoulis said the exhibition is a journey through time, which provides a holistic experience of Greek art and Greek treasures across millennia.

The fact that Benaki Museum is the only one of its kind in Greece, spanning thousands of years of Greek history regardless of theme or era, was a determining factor to initiate the collaboration with Benaki, he said.

Apart from the main collection, as part of the collaboration with the Benaki Museum in the years to come, the Hellenic Museum will also host smaller exhibitions, featuring Benaki’s Chinese, Islamic, Coptic and other collections.

Addressing the audience at the official launch of the opening of the exhibition, former Greek minister for culture and tourism, Pavlos Yeroulanos, said that the legacy of Greek people is their commitment to build on the values their ancestors gave to the world.

“Our legacy is not our DNA. Our legacy is our commitment to preserve and to create, to build on the values that our ancestors gave to the world: all the values that we Greeks believe in today and through history; feeling proud of our contribution no matter how big or how small. No culture might ever reach what our ancestors gave to the world. But we have created everything in between that links us to them.

“We are proud of our culture not as fragmented accounts of moments of brilliance but as a brilliant continuum of creativity and influence. That is what Benakis believed in. And that is what his museum is all about”.

Proud of her family and the legacy of her great-grandfather Antonis Benakis, Ms Geroulanou told Neos Kosmos it wasn’t the family connection that brought her to Benaki Museum.

“I never met Antonis Benakis which means that I was never influenced by his character and his passion. On the contrary, I heard stories that he wasn’t the best of fathers, nor the best of grandfathers – as is normally the case with people so passionate about other things that they don’t have time for their family,” Ms Geroulanou says with a laugh.

“I actually fell in love with the Benaki Museum through its director, Professor Angelos Delivorias. Although my family was a bit sceptical, Professor Delivorias trusted me and since the age of 24 I have been involved with the museum.”

To this day, the Benaki Museum remains one of the Greek museums that receives the most donations from the public. Museums from around the world approach Benaki Museum on a daily basis, and single items from its collections are sent to exhibitions abroad.

The ten-year collaboration with the Hellenic Museum is a precedent for both museums.

The exhibition ‘Gods, Myths & Mortals: Greek Treasures Across The Millennia’ is on display at the Hellenic Museum, 280 William Street, Melbourne, Tuesday to Sunday, 10.00 am to 4.00 pm. For more information, visit www.hellenic.org.au

*A previous version of this article stated that Antonis Benakis was believed to be one of the first Greeks to go to Oxford. This was quoted by Pavlos Yeroulanos during an ABC Radio interview with John Faine but could not be verified.