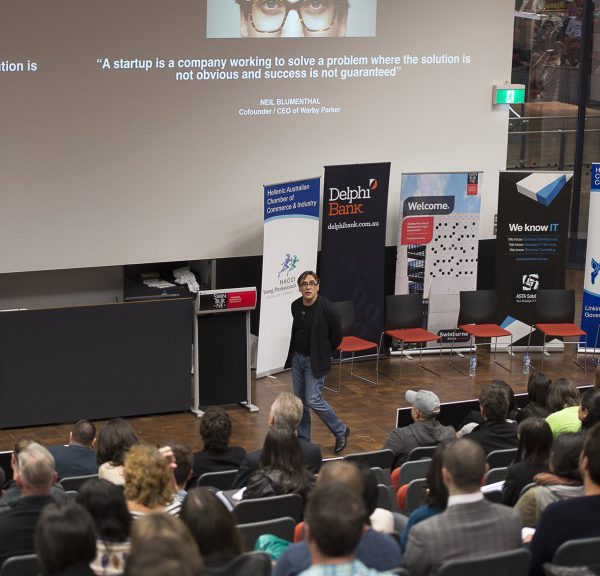 Renown brand strategist Peter Economides was in Melbourne last week to give a select few young Greek Australian invaluable tips on starting their own businesses.

As part of the first events for the HACCI Young Professionals Network (HYPN), Mr Economides spoke at two events, one a private 30 person masterclass on branding and the other an open lecture at Swinburne University on start ups.

The masterclass had Mr Economides speaking praise for the bright young minds in the Greek Australian community.

“I’ve been very impressed with the talent I’ve seen among the Hellenic Australian youth here this weekend and look forward to hearing of their future endeavours,” he said.

He spoke about the importance of creating a strong brand to back up great product ideas, indicating how brands that he’s worked for, including Coca Cola and Apple create a culture around their products.

“People don’t buy what you do, they buy why you do it,” he said.

“You don’t sell a product, you sell your business’ culture. This is what the world’s most successful brands do so well.”

At the one hour lecture, Mr Economides was part of an interactive panel comprising of industry leading Swinburne academics.

HYPN convenor Ashley Nasiakos, who organised the two events in conjunction with Swinburne University says he hopes to follow up the success of the first events with more programs for the growing network.

“It’s been an incredibly successful series of events and we look forward to following it up with the launch of the HYPN mentoring program later in the year,” he said.