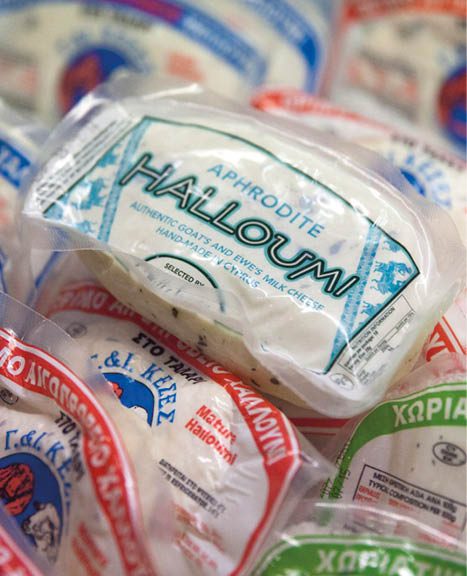 A modest but quietly positive group of Greek exporters filled the Fine Food Australia Greek stand this week, hoping to garner some interest and gain some local importers.

The exhibition, one of the largest trade shows for the foodservice, hospitality and retail sectors in Australia, gives international and local distributors and importers the chance to mingle with the industry’s best and hopefully create long-lasting business deals.

At the Flavours of the World section, a small Greek and Cypriot contingent set up shop at the four day show in Melbourne.
Finishing on Thursday, only nine Greek exhibitors and eight Cypriot exhibitors made the trip, about half the amount that came last year and the year before.

The Greek contingent has companies that specialise in everything from olive oil, feta, dairy products and alcohol, while the Cypriot stalls included things like flour, pasta and ice cream. The Cypriot stall even had ice cream for dogs, a new product brought out by Max & Frida under the umbrella of Cypriot ice cream giant Panayiotis Ice Cream.

They have to compete against 1,000 exhibitors from all around the world to get the Australian importers’ interest, something even the best products might not be able to do.

The reality is the Australian market is a challenging landscape.

The Greek state commissioner for trade in Australia, Vaianos Oreopoulos-Kelenis, who has been the exhibitor’s Australian contact, says Greek companies face fierce competition from local brands and well-established international brands.

“The biggest challenge is the Australian market itself, it’s a peculiar market, it’s not an easy market at all, because Australia has developed to the maximum, to an optimum level,” he tells Neos Kosmos.

Greek brands are fighting to be heard. Even those that have been established here for years are having trouble holding on.

“An exhibitor here at the Greek stall, they produce feta cheese and yoghurt of excellent quality, they’ve already incorporated with an importer here in Sydney, but so far in 40 years it has only imported two containers, which is basically zero,” Mr Oreopoulos-Kelenis says.

One of the biggest barriers new Greek companies face in trying to enter the Australian market is finding a competent and reliable distributor.

Those that are established distributors specialising in Greek products are about 85 per cent owned and operated by Greek Australians, according to Mr Oreopoulos-Kelenis.

They understand the products, know the quality and are able to market them expertly to the Greek Australian community.

The only problem is, the companies aren’t very willing to take on new brands. They have their set group, and won’t open up the listings if they can’t afford it.

That’s where Mr Oreopoulos-Kelenis says the Greek government is trying to help. One of his main roles is connecting new Greek companies and local distributors together, but most times the connection severs because one side isn’t interested.

“I have heard a lot of stories of Greek exporters who have sent emails to Australian companies or Australian Greek companies, and they never get a reply,” he says.

“If they don’t develop face to face communication it won’t work.”

That is why Fine Food Australia is a great way to get a start.

Event director Minnie Constan says the stall has been seeing a steady flow of interest, with the new, official agency of the Greek State, Enterprise Greece, overseeing some positive steps forward.

“It’s to be expected, we love our food in Melbourne.”

Touring the site most days, Ms Constan saw the sun-dried tomato stand inundated with interest, as was the company Peachy, specialising in tinned peaches ripened in the Mediterranean climate.

She has also seen a spike in demand for imports from Cyprus in the last couple of years.

“We’ve had Cyprus in the show for a number of years and I know the export opportunities that have come from being in the show have probably tripled since they started doing it,” she says.

While the amount of Australian imports to Greece has dropped by more than 50 per cent, the demand for Greek products in Australia has jumped.

According to the Department of Foreign Affairs and Trade, the imports from Greece to Australia totalled $170 million, up from $158 the year before.

Australia ranks in the top 40 of principal export nations for Greece, quite a considerable feat considering most of the top countries are part of the European Union or are close neighbours.

Australia is taking in lots of fruit and nuts, dairy products and aluminium from Greece.

Sadly, the demand isn’t the same in Greece. Riddled by a flatlining economy, Greece hasn’t had much demand for foreign products in the last couple of years.

Mr Oreopoulos-Kelenis says our distance and Greece’s economic state are mostly to blame.

“The Greek economy is in the phase of recovery, and as you understand, internal consumer demand has collapsed,” he says.

At least down in Melbourne, the seeds have been sown for new Greek ventures. With the biggest Greek population outside of Greece in Australia, the demand won’t be going away anytime soon.