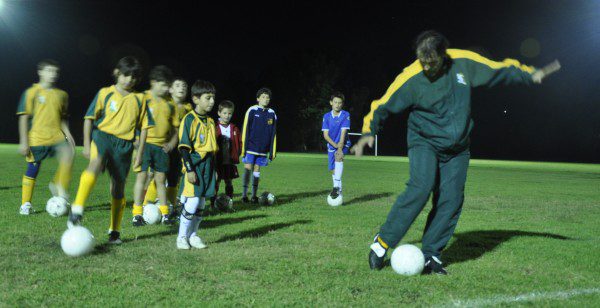 Peter Katholos’ tenure might have ended at Football NSW a year ago, but his experience with the Skills Acquisition Program (SAP) was not a happy one.

The former Socceroos and NSL great says there are gaping problems with the program and wants to see more done about the state of coaching in the state and nationally.

“I’m not involved anymore with the program because I don’t agree with its structure,” Katholos told Neos Kosmos.

“The whole thing needs revamping if we are going to be a force in world football, this should be our aim.”

The program trains children aged Under 9 through to Under 12s, promoting itself as an elite program for young footballers. That’s not what Katholos saw.

“When you call it ‘elite’ it means the best,” he says.

“No disrespect to the guys but what I’m saying to you is the leading program in football NSW for all those age groups had inappropriate coaches to teach skill.”

Katholos reveals that although many of the coaches were fully qualified, there was no set curriculum.

“A skills acquisition program had no curriculum and the program was endorsed by Football Federation Australia (FFA).”

“Where is the 40 week program that every coach in Australia follows? Where is the manual so everyone is uniformed to do everything the same in skill teaching?”

Katholos says he tried to contact then FFA technical director Han Berger, author of the curriculum, but he got no response.

Current technical director for Football NSW Alex Tobin declined to comment when Neos Kosmos contacted him, but did say it’s an important issue.

Katholos isn’t convinced that they are committed to change.

“It’s all talk. It has never being put properly into action,” he said.

He has seen many parents take their kids out of the elite system in Australia and go through private academies.

One such example is recent Udinese signing Panos Armenakas. Armenakas bypassed the elite set up in NSW to train at the AC Milan Academy.

Katholos says that academies are now an option for parents because they offer something different.

Katholos wants to see a national approach to building academies.

“There should be training centres of excellence around the country funded by the federations with top coaches coaching our best footballers. They don’t exist.”

There has been promising steps at least to see a better national curriculum implemented.

Abrams will be leading all of the elite pathway and youth development structures in line with the national curriculum that has been in place since 2009.

He will also take responsibility of the coach education program.

The new structure follows a review of the FFA’s technical structure by FFA head of national performance Luke Casserly, which highlighted youth technical development as a key area for improvement.