Cahill: no bad blood with NYRB 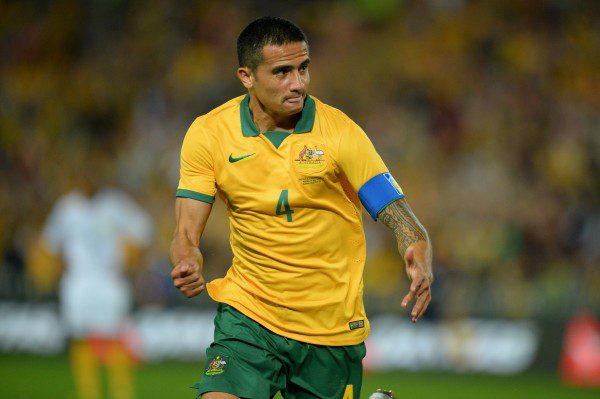 Club versus country will never be a contest for Tim Cahill but the Socceroos legend insists there is no bad blood between he and his Major League Soccer team.

Cahill was last week forced to defend his commitment to Australia amid reports the New York Red Bulls were unhappy with him leaving at a crucial stage of the American season for the Socceroos’ friendlies in the Middle East.

The 34-year-old was dropped to the bench for last Saturday’s 1-0 win over Houston and, while Red Bulls coach Mike Petke claimed the decision was tactical, Cahill reportedly vented his anger at the situation.

However, after arriving in Abu Dhabi ahead of Friday’s friendly against the United Arab Emirates, Cahill insists it is all in the past and his relationship with club and coach remains strong.

“The main thing for me is I’ve not taken anything to heart,” Cahill said.

“I just want to respect my club and respect the Socceroos.

“I want to have a good camp here for the next two weeks and go back and help my club qualify for the play-offs.”

Cahill received a red card just three minutes after coming off the bench against Houston, meaning he will serve a suspension when he returns to the US, but he is confident of helping his club challenge for the MLS title.

Cahill is not one to turn down any opportunity to represent his country and said last week any club who signed him should know his attitude towards international football.

Missing the inconveniently-timed friendly matches in the Middle East was never likely to enter his head.

“Every camp for me and (fellow leaders) Bresch (Mark Bresciano) and Mile (Jedinak), we have to be here. We have to drive this and believe what’s going on,” Cahill said.

“We’ve really only got around two weeks of football together before the Asian Cup, there’s not a lot of preparation time.

“You look at someone like Mile, he plays in the Premier League and has got some massive games coming up and him being here shows his intent and what he wants to do for this team.”

The matches against the UAE and Qatar, in Doha on Tuesday, are timed awkwardly for several players in Postecoglou’s squad.

Like the MLS, the A-League does not break for FIFA international dates, meaning Mark Milligan, Nikolai Topor-Stanley and Bernie Ibini will miss this weekend’s opening round.

Socceroos coach Ange Postecoglou does not see it as an issue.

“You’re selected for your country and you turn up. It’s quite simple and it always has been for me, even as a club coach,” Postecoglou said.

“If you’ve got to make a case (to a club) for someone to play for the country, I think we’re heading down the wrong path.”