Maria Kyriacou, mother of two and breast cancer survivor, takes us through her life-changing experience 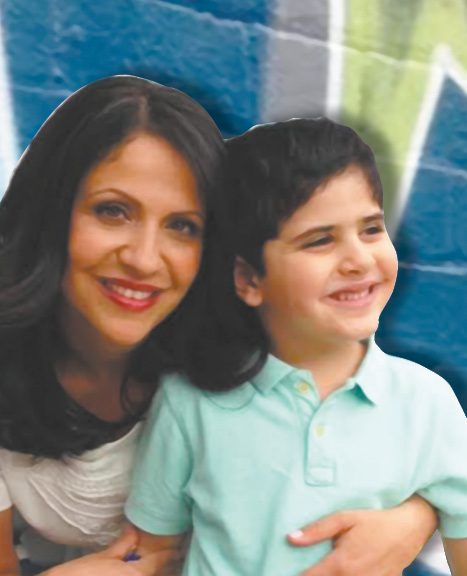 Cancer. It seems almost impossible to either hear or read this six-letter word without a pause. The interpretation itself might result in quite a few renderings. Such a small word can be found in an abundance of shapes and sizes. It can trigger implacable emotions, rising from the darkest places of one’s heart. A shadow even, tiny as a grain, is not to be taken with a grain of salt. There is barely a dry eye in its presence. Don’t we all have a story to share?

Sometimes, the ending is abrupt. Without a ‘pause’. Just a full-stop. Cancer can strike anyone at any age, even a young, healthy woman, and strip her of her breasts. But this is a small price to pay compared to survival.

Maria Kyriacou, had a double mastectomy, followed by an ordeal of reconstructive surgeries and massive complications. Instead of losing her faith, she reinvented herself, put on a smile and carried on even stronger. Neos Kosmos contacted Maria, hoping her story will inspire and encourage other women who might be in these very painful shoes, as well as their families.

“I often joke I got cancer for Christmas,” says Maria. “It was during the holiday season in 2009 when I was 35. I’d been feeling fatigued for about 8 months, but kept thinking it was because I had two kids under two years of age. I had gone to my GP, but none of the tests proved conclusive. Eventually I found a lump. The expression on the mammogram technician’s face and the doctor coming in and out of the scanning room several times gave it away.” Her first thoughts and deepest concerns following the diagnosis were if she was going to be here to raise her children.

“I’d lived a very full life, even though I was relatively young. I’d travelled and worked in many different countries, and so didn’t feel I had missed out on those kinds of experiences, but I had a one and two-year-old. I couldn’t bear the thought that they’d grow up motherless,” she explains.

Maria was initially told only one breast had to be removed, but she took the curt decision to undergo a double mastectomy. “It’s important to note that a bilateral mastectomy is not necessarily the right choice for all women with breast cancer, even if it was – eventually – the right choice for me. It’s a very personal decision where you have to weigh up many factors.” Her next line might come somewhat as a surprise to many but she makes sure we get her drift.

“I wasn’t precious about removing my breasts. I felt very grateful for being able to breastfeed my children, having been diagnosed very soon after my son stopped breastfeeding. Now I felt I needed to do everything I could to give myself the best chance of survival, to be around. To see them grow. After researching the facts, discussing it with my doctors and family, I was adamant that I wanted a double mastectomy.”

Maria admits she was also influenced by the recent death of a beautiful aunt whose cancer had returned in her remaining breast, years after having a singular mastectomy. She had also read it was easier to have symmetry in terms of reconstruction.

“I don’t think an immediate reconstruction is a good idea,” Maria quickly goes on to add. “All women should consult their surgeons, as I am not qualified, but your cancer treatment is guided by the pathology from your removed breast/s, so how can you make such an important decision before knowing your stage of cancer? It was a disaster for me.” Her surgeon, right after her decision to undergo a double mastectomy, hit her with what seems to be a rather inconsiderate line – to put it nicely: “You don’t want to wake up flat.”

Maria is not the only woman who has been referred to a plastic surgeon right after the diagnosis. “My feeling is, you’ve just been told you have cancer. Are you really in the best position to make such a serious and expensive decision? After my pathology from the removed breasts came back, it was clear I would also require radiotherapy. This affected the implants inserted during the immediate reconstruction, which needed to be removed. It was unnecessarily stressful on top of dealing with the anxiety of cancer. In hindsight, I should have waited.”

Complications with reconstruction meant her chemotherapy was delayed. “I considered that much more important than new breasts. My cosmetic result hasn’t been good either due to the issues that arose from the first attempt at reconstruction. It was a huge waste of energy and money. I eventually found a micro-surgeon and had a DIEP flap, where they take your baby belly and create new breasts – that was one of the positives,” she says, grinning, which makes one wonder what it must take for a person to have both strength and courage, not to mention a strong sense of humour, in spite of the load.
“This is a very precarious question, as I personally feel cancer patients can feel suffocated by the ‘courageous and strong’ label. You hear it so often when you’re sick, but I always felt there was no other choice but to keep going.” This has always been her father’s simplest and most useful advice through life. To keep going. ‘If I can get through one more chemo, I’ll be closer to the end. If I ignore my radiotherapy burns, they’ll heal soon enough and I’ll be able to pick my baby up again for a cuddle,’ she kept thinking.

“During treatment, cancer narrows your focus to the present. It’s afterwards that you need your bravery,” Maria tells Neos Kosmos. Moreover, she feels women lack appropriate and sufficient awareness regarding the matter and what comes afterwards. Emotionally that is. “I was very strong during my year of treatment, for example I didn’t cry when I was diagnosed and rarely through my treatment but it hits you afterwards, like PTSD. After the initial shock of finding a handful of hair on my pillow, losing my hair didn’t bother me so much. There are things you are told about, but don’t quite grasp until after you’ve had treatment. Going into early menopause is very difficult, as it makes you feel fatigued and hot, which is a pain when wrangling two young children. I also developed osteoporosis due to the drugs I need to take. I sometimes say that in my mind I feel 21, but my body feels like a granny’s,” she confesses while laughing.

A cancer patient needs support. Going through such an experience alone shouldn’t be an option, regardless of the extent of one’s strength. Her family and friends, especially her mother, were there for every procedure, actually nursing her through recovery, motivating her to push through the pain and the emotional roller-coaster of cancer treatment. Adopting a very healthy diet helped too – not to mention being treated by an incredible oncology breast surgeon. If anything, she feels her bravery and strength is evident in her post-cancer life.

“As I get further away from it, and get used to my new body, I sometimes forget I even had it.”

However, she still has very regular check-ups, which can throw her back into the cancer patient mentality. “I’ve had many scares of a recurrence this year and until your scans all come back clear it’s terrifying. People think you should be over it, but they don’t understand that your body and psyche still has regular reminders of your experience. You’re forever changed, not only in negative ways. I don’t want to waste a minute of my life and I’ve become much more assertive. I won’t put up with unnecessary stress or nonsense anymore. I love and respect my life so much more.”

As dealing with breast cancer becomes part of a family’s daily routine, we asked her to share a word of advice for our male readers.

“Just be kind and patient with her. Don’t take her reaction to what she is going through personally. It’s very important for these men to be offered counselling as it can be more difficult for them in a way. You’re focused on getting through treatment but they feel helpless. And we know men like to fix things.”

A lot of women in their 30s or even at an earlier age are diagnosed with breast cancer, aggressive most of the time, resulting in undergoing a mastectomy. Some of these women, unlike Maria, are childless, others are single. Maria derived strength from her family. Not every story is similar though. There is a considerable number of women, on the other hand, who dive into depression, even if their chances of survival are high, for fear that they will lose their female identity and be unable to experience motherhood. No better choice but to conclude this piece with Maria’s honest and inspiring words toward them.

“This is a very difficult reality and I empathise wholeheartedly, although I won’t pretend I have the answers for women struggling with fertility. I think cancer-specific counselling is very important and women can get a referral from their oncologist if they feel they’re struggling with these issues. I still feel very feminine despite having had a mastectomy and being in menopause. As women, we are defined by so much more than just the sum of our body parts. As women who’ve experienced cancer, and have an insight into how precious life is, we have so much to offer.”