Oxi Day remembered around the country 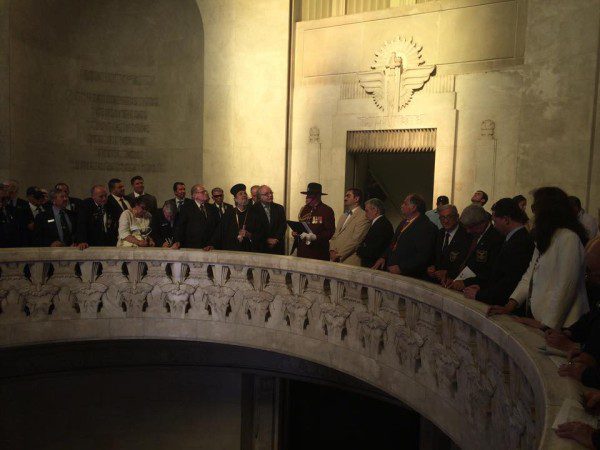 Thousands of Greek Australians marked Oxi Day last week with commemorative services around the nation.
In Melbourne, hundreds gathered at Axion Esti monastery to start proceedings last Sunday to show their respects to the Greek soldiers who fought the Italian assault after October 28, 1940 during WWII.

The church service was led by Bishop Ezekiel of Dervis, before the crowd moved out to watch a wreath-laying ceremony at the monastery’s cenotaph.
Greek Consul General of Melbourne Christina Simantiraki was joined by president of the Greek community of Melbourne and Victoria, Bill Papastergiadis, Pan Cretan Association president George Nikolakakis and the president of the Union of Communities, Quarters Kostas Kontis in laying wreaths at the site.

On Tuesday, the day of the anniversary of Greece’s entry into WWII, Melbourne’s RSL Hellenic Sub-Branch led the wreath laying service at the Australian Hellenic Memorial in the Domain Gardens, after a service was held at Agios Eustasios church in South Melbourne. Greek Consul General Ms Simantirakis, and Brigadier Keith Rossi, WW2 veteran and representing the RSL, addressed the assembled crowd, which included dignitaries, politicians from both sides of politics and students from Alphington Grammar.

In Sydney, Greek Australians gathered at the ANZAC Memorial in Hyde Park to host a memorial service, something that has never happened on that site before.

The Greek Ambassador to Australia Haris Dafaranos joined the Consul General of Greece in Sydney, Dr Stavros Kyrminis, in laying wreaths at memorial. During the service, 646 stars were scattered with the names of Australian and New Zealand soldiers who died on Greek land during the war.

A reception hosted by the Greek Community of NSW followed, with the young Greek Australian community students reciting poems and performing traditional dances.

The events were preceded by the Being Greek Festival presented by the Greek Orthodox Parish and Community of Kogarah, which was used to commemorate Oxi Day celebrations.

The Greek Orthodox Parish and Community of St Ioannis in Parramatta hosted their own liturgy on Sunday, while the parish’s Greek school held a national day concert.

In the Gold Coast, Father Romanos led a liturgy at St Anna’s Greek Orthodox church on Sunday to commemorate the anniversary. The Queensland Greek Consul General, Jim Raptis, took part in the service alongside the Greek community and representatives of AHEPA. Many younger members of the community felt compelled to dress up in national costume, and led the crowd in singing the Greek national anthem.