Not missing a beat 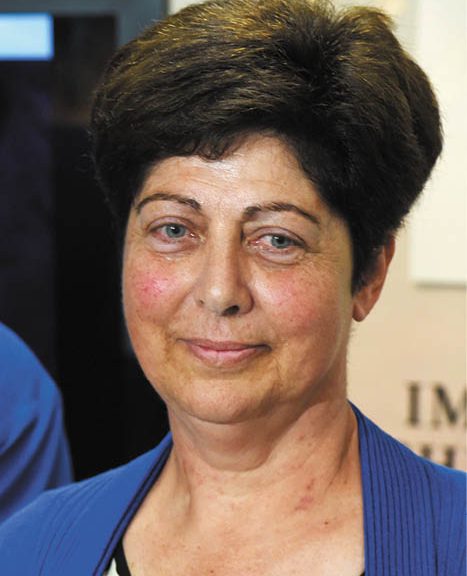 Gasping for air, not being able walk more than 100 metres and given just months to live, Michelle Gribilas felt like she was living a life sentence.

Her heart was operating at 25 per cent capacity.

“For two years I couldn’t move and walk a lot, it was hard during the summer periods,” she tells Neos Kosmos. “Everything was affected.”

She was going down the same path as her son, Kosta, who in 2008 was languishing on the heart transplant list in Greece. He was eventually saved after he received the heart of Australian teenager Doujon Zammit, who died in Greece while on holiday.

With her son’s dire diagnosis, she, alongside her whole family, underwent a myriad of tests to see if they were vulnerable to the same fate. All the tests came back negative.

That is until two years ago.

Moving back to Australia in 2011 from Laconia, Greece, Mrs Gribilas was keeping up to date with her tests, being as cautious as she could be to make sure she would be around for her children and grandchildren.

Her heart was failing.

While doctors weren’t able to tell her if her condition is linked to her son’s, all she knew was that she would need the same treatment. A new heart.

Three months ago, she got her new heart, but through a very unique procedure.

She was transplanted with a technically dead heart. Her new heart was in fact reanimated by doctors to beat again.

She was the first recipient in the world to receive a heart in such a way.

Doctors at Sydney’s St Vincent’s Hospital were able to transplant a heart that had stopped beating for 20 minutes, resuscitating it by pumping it with fresh blood and injecting it with a preservation serum.

The operation was a testament to the joint work of the hospital and the Victor Chang Cardiac Research Centre, who have been working on the theory for 12 years.

While Mrs Gribilas knew she was getting the unique transplant, she didn’t realise she was the first person ever to get it.

“The first heart transplant that we did looked very, very poor indeed,” he told the ABC.

“It wasn’t beating very well at all.

“By the time they brought the heart to St Vincent’s Hospital from where the donor patient had been, the heart was starting to look a lot better.

“And by the time they put it into the patient it was looking very good.”

Now after three months, the heart is behaving exactly as it should, with no evidence of tissue damage.

Two more people have had heart transplants in the same way, showing that there’s huge potential for the method.

It has also widened the time for the operations, as the heart can be kept warm and beating on the console machine for up to eight hours.

The breakthrough could see the number of successful heart transplants rise by 30 per cent, potentially cutting the waiting times down dramatically.

Going into hospital every week to get the new heart checked, Mrs Gribilas has been seeing some great results. She can walk for kilometres, even climbing hundreds of stairs in a day.

She is also finding her son Kosta a source of invaluable information.

Going through such an ordeal, and seeing how it’s affected her family, Mrs Gribilas says the one thing she’s learnt is how important it is to have the organ donation talk with your family.

“It’s one of the marvellous things you can do, because you give someone another chance at life,” she says.

Surprisingly, migrant communities are some of the least represented in giving the OK to become organ donors.

Confusion, superstition and faith are some of the reasons why Greeks are reluctant to become organ donors. Some are even under the impression that removing organs at the time of death means they won’t be seen by god on their ascent to heaven.

The Greek Orthodox Church has clarified their stance on the issue, and said the gift of life is one of the noblest gifts a Christian can give.

“Organ and tissue donation transforms the lives of people in need of a transplant,” Archbishop Stylianos says.

“It respects the sanctity of life and enables people to give the ultimate gift of life to others.”

Mrs Gribilas is a living example of just how important it is to be a donor, while she sees the dire need for more to heed the call.

In Australia, organ donors remain anonymous, even if the new recipient would like to show their gratitude.

While Mrs Gribilas’ son Kosta was able to personally thank the donor’s family, Mrs Gribilas won’t have that chance.

“I would like to write them a letter and send them some flowers, but I don’t want to meet them,” she says.

“It’s a very delicate topic, you get very close to them, you feel sorry for their loss.”

Organ donation is a very precise art. Even if there’s an abundance of organs, the recipient must be deemed a correct match, with blood type and medical history being looked at.

Around 1,500 people are on Australian organ transplant waiting lists at any time. In Australia the family of every potential donor will be asked to confirm the donation decision of their loved one before donation can proceed.

To find out more about organ and tissue donation and to read information in Greek, visit www.donatelife.gov.au/