The Estonian journey to Australia

Members of Sydney’s Estonian, Greek and Ukrainian communities gathered to discuss the journey of one of Australia’s first post-war migrant groups 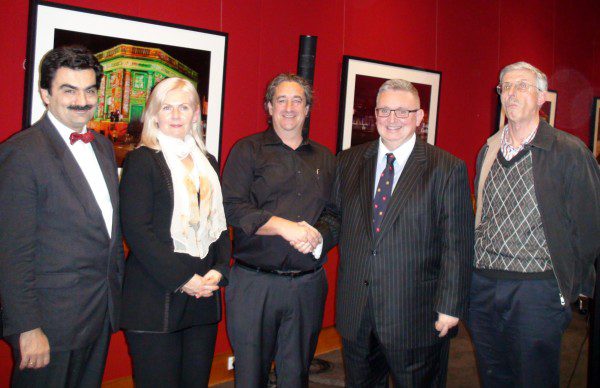 Under the auspices of the Estonian Archives in Australia, Sydney school teacher Vasilis Vasilas presented his latest book, Across Lands and Oceans … to Freedom; Stories and Photographs of the Estonian Journey to Australia and New Zealand, to the president of the Legislative Council of New South Wales, Don Harwin, to be placed in the Parliamentary Library.

Members of Sydney’s Estonian, Greek and Ukrainian communities attended the special presentation, which was initiated by the Hon. Sophie Cotsis MLC, and celebrated both Vasilas’ achievement with this book and the journey of one of Australia’s first post-war migrant groups – the Estonians.

While NSW Senator Sophie Cotsis highlighted how personal stories bring history alive, referring to some specific stories throughout the book, both Consul General Katrin Kanarik and Consul General Stavros Kyrimis pointed out how important it was to capture the personal stories of the war/post-war generations before it passes and how this publication has brought Estonia and Greece closer together.

The writer himself emphasised the common threads that run through personal stories, such as war, exile, displacement and poverty, allowed us empathise with the stories from different nations and that the most important thread, that connects all migrants in Australia, was the embracing nature of their adopted homeland as Australia accepted them and they subsequently became part of Australia’s history.

Members of the Estonian community, Boris Lees and Tiiu Hoile, presented the president of the Legislative Council, Don Harwin, who reiterated Australia’s acceptance of migrants from all over the world and pointed out how the migrants’ security, and subsequent success, was based on Australia’s principles of liberty and equality. President Harwin concluded with his anticipation of Vasilas’ next publication on the Ukrainian journey to Australia and wished him well in this endeavour.