Dancing, food and all things native to Thessaloniki will be on show to celebrate the strong relationship between Thessaloniki and Melbourne 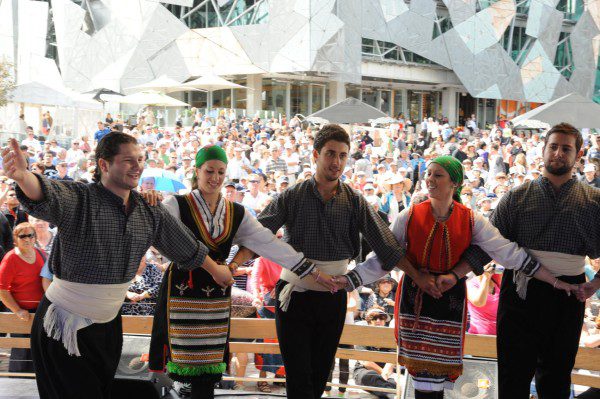 Melbourne will turn Greek on Sunday as the city celebrates it 30 year sister city connection with Thessaloniki.

While celebrations have been going on since the start of the year, festivities will come to their peak at the annual Glendi Festival at Federation Square.
Guest of honour will be Thessaloniki’s mayor, Yiannis Boutaris who will join the Ambassador for Greece, Haris Dafaranos and the Consul General of Greece in Victoria Christina Simantiraki.

While he was booked for an appearance, the minister for Macedonia and Thrace, Giorgos Orfanos cancelled his trip on Tuesday without sighting a reason.

He did leave a message for the Greeks of Australia and promoted the two cities’ unity.

“The fact that 300,000 Greeks live in Australia highlights the important role which Melbourne plays in promoting the Greek culture and where Greece stands in the world,” Mr Orfanos said in his message.

‘The spirit of unity which the Greeks of the diaspora have shown should set an example for all of us,”

Festivities will start with a parade of musicians and dancers from City Square, who will make their way to Federation Square.

The musical and dance program will begin at 2pm, while the official launch and address from local and international dignitaries will begin from 4pm.

Dancing won’t be constricted to the region of Thessaloniki, with lots of dancing groups from all over the country making appearances.

The Anagenisi band will close proceedings, as it will play neo-classical Greek music, rebetika and laika to get everyone dancing and remembering the motherland.

The festival is free, and will include an array of stalls showcasing the best of Thessaloniki culturally and gastronomically.

The sister city relationship between Thessaloniki and Melbourne was created and signed on March 19, 1984 when the then mayor of Thessaloniki, Theodore Manavis visited Melbourne. The occasion was marked by a celebratory concert at the Melbourne Concert Hall.

The then lord mayor of Melbourne, Kevin Chamberlin said he hoped the relationship would give Greeks living in Australia a feeling that their homeland was close.

“The Council hopes that through the formal links now established between our two cities, Melbourne’s Greek community can develop an even closer involvement in their adopted city, whilst still maintaining ties with their homeland an traditional heritage,” Cr Chamberlin said.